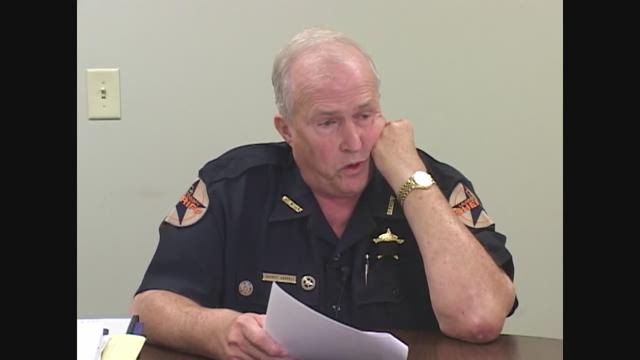 Hooks was killed in September 2014 during a drug raid at his home by Laurens County deputies.

Last year, a Laurens County grand jury said there would be no criminal charges against the deputies in the case.

But his widow filed a wrongful-death lawsuit against the sheriff and others this spring.

The lawsuit alleges that the drug raid on their home was illegal and never should have happened. It claims Laurens County investigators took info from a known meth addict and never verified his tips and the suit says Harrell had a grudge against Hooks and planned to seize his property.

In response to the lawsuit, Harrell released a statement that said, in part, “A cooperating source provided a container that he said he took from Hooks' vehicle, containing a significant amount of methamphetamine."

Harrell also wrote that , according to the GBI crime lab, “Biological evidence, including DNA matched the container to David Hooks."

But on Aug. 17, Hooks' family attorney, Mitchell Shook questioned Harrell about those statements and other aspects of the case.

Video and transcript of Harrell's deposition were mailed anonymously to 13 WMAZ..

Shook and the sheriff clashed repeatedly during the 3 1/2-hour deposition, over evidence in the case, Harrell's statements to the press and his memories of the night Hooks died.

Toward the end of the session, Shook asked. “Where did you get the evidence, the information, that there was any biological evidence especially DNA that matched the container to David Hooks?”

The video then shows Shook handing Harrell the report. “The only thing they were able to determine was that there was. A similarity,” said Harrell.

“A hair from a white male. So when you said in your statement that including DNA matched container to David Hooks, that's misleading isn't it sheriff?” said Shook.

“You can say that yes,” said Harrell.

“There is no DNA evidence linking David Hooks to the container to anything associated with this case is there?” asked Shook.

“That is the only thing I know of sir,” said Harrell.

Shook continues to question Harrell about the DNA evidence. “So when you told the people of Laurens County that there was DNA evidence that matched this to David Hooks, you mislead them didn't you?” asked Shook.

“Object to the form of the question.” said Buckley.

“Asked and answered. He's told you what he was basing it on,” said Buckley.

“You lied to them didn't you?” asked Shook.

“Object to the form. Don't answer that. Mitch, stop it. You're just arguing with him; you really think he's going to say yes or no to that?” said Buckley.

“Well I'd like for him to admit what he did,” said Shook.

“He's answered your question. You can ask him 'did you lie to the people of Laurens County?' And he can answer that, subject to my objection,” said Buckley.

“When you published in the media, including Laurens County, that there was DNA evidence matching David Hooks to the container, that was not true was it?” asked Shook.

“From what you have shown me, that is correct,” said Harrell.

We spoke to the Hooks' family attorney Mitchell Shook Monday afternoon. He confirmed that he took a videotaped deposition of Harrell on that date, but he declined to discuss the content.

We called Sheriff Bill Harrell, but his secretary told us he wasn't available. He did send us a statement.

Rather than pick and choose out of context excerpts from days long depositions or pleadings from a lawsuit filed by the widow of David Hooks or – for that matter threats against his family, I, Sheriff Harrell will stick to the issues and to the truth. The truth is that probable cause existed for the execution of a knock and announce search warrant at the Hooks residence in 2014. Sworn officers of the Laurens’s County Sheriff Office properly sought and secured the search warrant from an independent magistrate and attempted to properly serve that warrant. The failure of David Hooks to comply with the clear and multiple announcements of the uniformed officer of the Sheriff’s Office and Mr. Hooks’ decision to point a weapon and continue to point it at law officers at close range was the reason for this unfortunate death. Out of respect for the proper law enforcement process, I, Sheriff Harrell sought to show restraint in not responding to outlandish and ultimately disproven claims and accusations from the representatives of Mr. Hooks and his widow, the media and others during the investigations required by law. Those investigations effectively vindicated the Sheriff and the officers of the Laurens County Sheriff’s Office. The Sheriff then and in all day to day operations of his office has sought to uphold the law for the people of Laurens County. Neither efforts to twist and spin the facts nor threats of violence will deter Sheriff Harrell from fulfilling his lawful duties to the people of this great community.