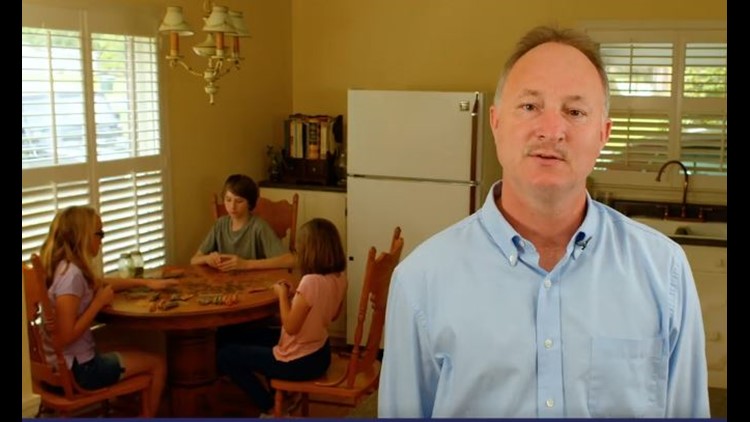 In a video kicking off his 2020 campaign for mayor, Lester Miller discusses his humble roots, hard work, "change" and the Golden Rule.

He also talks about attracting businesses and good jobs to Macon-Bibb, keeping taxes low and "cutting waste and rooting out corruption."

Miller, a lawyer and school-board president, posted the video Thursday to his campaign Facebook page. By email, a campaign spokesman said Miller so far hasn't planned a public campaign announcement.

He's one of six people who've taken out papers to raise money for the race.

For much of the two-minute, 35-second video, Miller talks about his family background and road to success.

"My parents worked hard but struggled to make ends meet," he says.

His mother worked as a waitress, Miller says, and he and his sisters rolled up her tip change to help pay the bills. In the video, three children re-enact the change-rolling as Miller tells his tale.

The family moved around so much, Miller says, he attended seven elementary schools, finally graduating from Bibb's Southwest High School.

He talks about having to give up his favorite sport, baseball, to work his way through Mercer and law school.

Along the way, Miller visits a school, poses on a baseball field and strolls down Poplar Street and at other downtown sites.

'A teenager who liked to argue'

Like Larry Schlesinger, who released his own campaign video last month, he doesn't mention Mayor Robert Reichert or any other mayoral candidates.

RELATED: 'Workhorse, not a showhorse': Schlesinger kicks off campaign for Bibb mayor

He does give a shout out to Henry Fickling, a former Macon City Council member and Southwest High teacher, "who saw a teenager who liked to argue and believed I could become a lawyer."

Miller says as mayor, he'd work with the school district to make sure Macon-Bibb's kids have the opportunity to fulfill their dreams.

He says he'll work to attract businesses and job and keep the cost of county government low, "instead of asking hard-working families to pay more."

But his most important rule, Miller says, is the Golden Rule, "treating others the way we'd like to be treated."

Miller announced in January 2018 that he's running for mayor in 2020. He's a longtime Macon attorney and currently president of the Bibb County school board.

Five other people have taken out papers with the county board of elections to raise money for the mayor's race.

They are: Schlesinger, a rabbi and county commissioner; Virgil Watkins, a businessman and county commissioner; Michael McKeever, a Robins Air Force Base employee; "labor advocate, financial advisor, insurance agent" Verbin Weaver; and Chatavia Ane'qua Callaway, whose Facebook page says she studied licensed practical nursing, but that she now works in the entertainment industry. Watkins and McKeever both filed papers on May 21.

So far, none of the other candidates have reported raising or spending any money.

Qualifying for the mayor's race and other county elections will be held March 2-6, 2020.