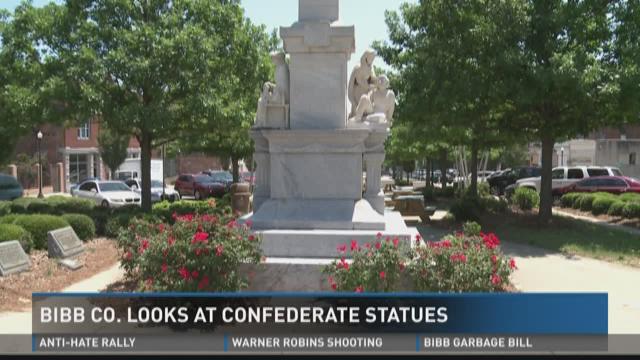 In light of the recent tragedy in Charlottesville, Va. on Saturday, much of the nation's attention has shifted to the hundreds of Confederate monuments in and around the South.

Macon author and historian Frank M. McKenney wrote a book, The Standing Army, noting the history of Georgia's Confederate monuments in 1993. McKenney died in 2012, but his work stands as a major source of information about the Confederacy.

In April 1912, the R.E. Lee Chapter of the United Daughters of the Confederacy sponsored a monument located in a narrow median in the street just outside the gate of Georgia Military College.

Separately, a marble tablet dated “1868” came about, but does not exist anymore. It is now a plaque that says “Unknown Confederates.” The plaque is noted as the first in Georgia to honor generally the fallen soldiers

The Bibb Monument was erected in 1878 by the Ladies Memorial Association of Macon in memory of the men of Bibb County and all who have their lives in the South to establish the independence of the Confederate. The monument was moved from the corner of Mulberry and Second to the triangular park between Second Street and Cotton Avenue in April 1956.

Mrs. Walter D. Lamar insisted Bibb should have the first Confederate Women’s Monument in the South, but Floyd County ended up dedicating one first. Coming in second, Bibb held their dedication June 1911 for the two statues of women going about their duties with a shaft between them. This monument is located in Poplar Street Park.

A marble soldier in a slouch hat is located in front of the old Cochran City School. The monument was presented to the city on behalf of the Cochran UDC in 1910 and faces west.

In April 1910 a monument sponsored by the Fannie Gordon Chapter UDC was unveiled by 13 little girls. The soldier stands at rest with his hands on his rifle and faces north. It is currently located on the courthouse lawn. It was moved from its original location for traffic reasons.

The Vienna UDC chapter dedicated a statue of a young soldier in 1908. The monument is located at the courthouse in Vienna. It has a Confederate monogram on one side and a UDC emblem on the other.

The Ladies Memorial Association of Hancock County decided to erect a memorial to the county soldiers killed in the War Between the States in 1881.The monument was reported as up in January 1882. The monument is a marble column with a bas relief Confederate soldier on the front and the inscription “In Memoriam.” It sat in the middle of Memorial Park. The monument is still at its original location.

An old wooden shaft was put in Evergreen Cemetery in 1907. In 1948, it was moved to courthouse square when the courthouse was rebuilt. It now faces north.

This statue outside of the old Houston County Courthouse in Perry was donated by the United Daughters of the Confederacy in 1907. It reads "May this shaft ever call to memory, the story of the glory of the men who waore the gray."

A granite tablet is located in front of the courthouse in Gray.

A Laurens soldier faces east with his musket in the crook of his right arm. The monument was placed in the triangle formed by Bellvue, Academy and Jackson Streets. It was sponsored by the Oconee Chapter of the UDC.

The first Macon County monument is currently located in Fannie Carmichael Park and faces east. It is a soldier with both hands on his grounded rifle. There are lion heads on each side. It was erected by the Phil Cook Chapter of the UDC in January 1911. The monument was moved in 1965 from the middle of Dooly Street in the middle of Montezuma.

Separately, Oglethorpe has a Macon County monument erected by the Oglethorpe Chapter of the UDC in 1924. It consists of a block of Ga marble flanked by marble globes surmounted by a third globe (surrounded by a fence), sits near the courthouse, date on monument is February 20, 1993, but newspaper establishes date of dedication as April 26, 1924. Originally, it was built with a fountain near an old artesian well in the intersection of highway 49 and Sumpter Street and moved to the present site around 1935

Monroe County has a bronze sculpture of a soldier hurrying north to battle, which was designed by Frederick C. Hibbard, a sculptor descended from a Confederate soldier. The monument, Sponsored by the Confederate Monument Association of Monroe County, is located at the corner of courthouse square.

There is no account of a dedication for the monument at a shaft called Shannon’s Meadow. It looks north at the courthouse.

In Sandersville, there is a large wooden large wooden cross on a three stepped stone base dedicated by the Ladies Memorial Association in the cemetery. It was intended to serve as a tribute to Confederate war dead until a marble memorial could be erected. Now, a marble obelisk dates from 1897 (the year the local UDC chapter came about) in the Sandersville cemetery.

On the other hand, in Tennille, a Confederate monument was dedicated in April 1917 by the J.D. Franklin Chapter of the UDC. It originally stood in a park called the square in the middle of the town and was originally a fountain with bowls on four sides of an eight-foot shaft. The Confederate battle flag is incised on the shaft. It is currently located at the police station.

The Confederate monument in Abbeville stands on a slight mound on the lawn of the county library across the street from the imposing county courthouse. The monument is a soldier on a shaft and faces north and was erected in 1909 by the Abbeville UDC.