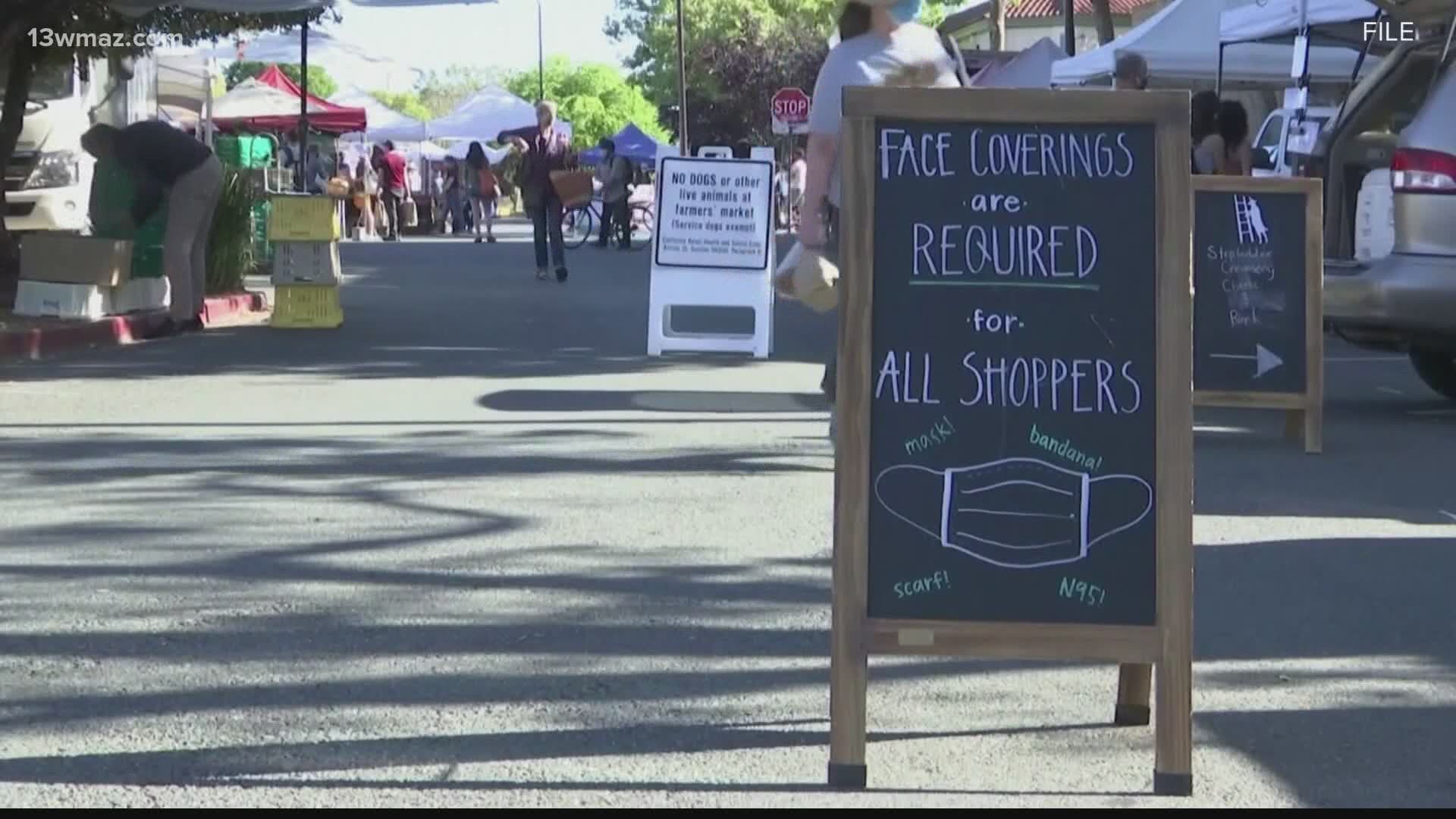 MACON, Ga. — Mayor Robert Reichert stopped short of issuing an executive order requiring masks this week, but the Macon-Bibb County Board of Health is pushing for it.

In a special called meeting Friday afternoon, the board urged Reichert or the commission to make face covering mandatory in public places either by executive order or county ordinance.

The resolution authored by board member Chris Tsavatewa cited a 178 percent increase in newly confirmed COVID-19 cases in late June, the latest summary figures available. Tsavatewa fears the numbers have only grown since then.

“The resolution confirms our convictions that local analysis, local evaluation is imperative in the midst of a public health crisis,” Tsavatewa said. “The statewide approach is not ideal for our community. It is imperative we take a stance.”

Dr. Patrice Walker, Chief Medical Officer of Navicent Health who serves on the board of health, said wearing a mask is a public health issue, not a political one.

“It’s like wearing a seat belt in a car,” Walker said. “Wearing of masks is liberating. It allows those leaving their house to do so in as safe a manner as possible.”

Five members of the public spoke in favor of mandatory masking before Friday afternoon’s vote during the teleconference.

Jake Hall, pastor of Highland Hills Church, said, “It seems clear that our county and our area is in trouble and yet when I go out into public spaces I see people not using the basic mitigation efforts.”

Claire Cox, president of Georgia Women and Those Who Stand With Us, read a statement prepared for the mayor and commissioners that was not read into the record during Tuesday night’s meeting, which was held by teleconference due to social distancing requirements.

Cox urged mandatory masking to protect the public, save lives and keep from overwhelming the healthcare system.

United Steelworker representative Alex Perkins also voiced his support for the resolution as did county commission candidate Seth Clark and Will Finkelstein, a 24-year-old community activist who acknowledged his age puts him in a lower-risk category.

“I go out and wear a mask because at the end of the day we do it for others,” Finkelstein said.

Reichert and his legal advisers have stated that due to Gov. Brian Kemp’s executive order, no municipality can enact measures that are stricter or more lenient than Kemp’s order.

Board of Health member and Macon-Bibb Commissioner Joe Allen refused to support the resolution because of the governor’s provision.

“I believe in masks,” Allen said. “I wear masks but I have to follow the law. … If we could get the governor to change his mind, I’d be all for it, but I can’t.”

“I would think this is worth challenging the governor’s office,” Cullinan said.

Tsavatewa also told Allen that to take a stand that a mandatory mask policy was not needed is “not a rational one.”

Elaine Lucas, who serves with Allen on both the county commission and health board, continued to press Allen.

Allen supports mask wearing but at board members’ urging opted to abstain from voting so that his opposition would not be recorded in the vote.

Thursday, Mayor Reichert did issue an executive order “urging and pleading” that people and businesses take all preventive measures outlined by the CDC to curtail the spread of the deadly virus.

Commissioners Allen and Lucas said the commission will be debating the merits of a face covering mandate at their committee meetings Tuesday.

“I don’t know how much more information we need to have to see that our community is in danger,” Lucas said.

She cited other municipalities across Georgia who have enacted a mandatory mask law in defiance of the governor’s executive order.

“I think there are many others that have it in the works to do this because they’re putting their people first,” she said.

What is considered 'exposure' to COVID-19? Macon business owners advised on how to handle infections