Over a month after the original request, the DA’s office has not provided the records. 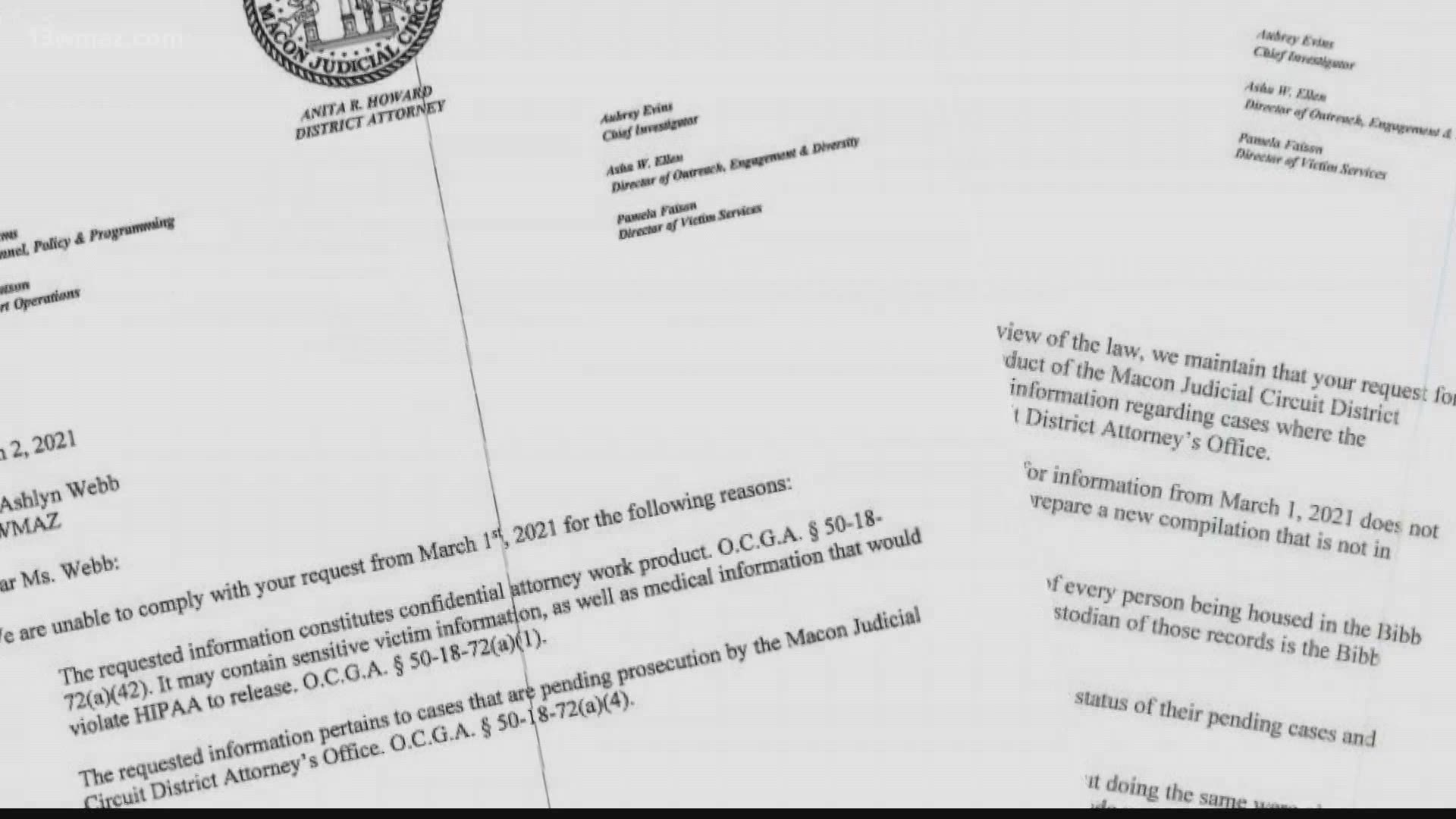 MACON, Ga. — Back in February, Macon District Attorney Anita Reynolds Howard called a news conference announcing her office had released 63 inmates from the Bibb County Law Enforcement Center. She said they were all accused of at least one felony, and after a review by her office, they were being released or their cases “disposed.”

“We look at each individual case, the set of circumstances of the case, what’s going on with the defendant, as well as contacting the victims. You know we are doing the work,” said Howard.

Since then, 13WMAZ has been asking questions. We wanted to know WHO was released, WHAT crimes they were accused of, and HOW each case was settled. We’ve received few answers.

Shortly after the Feb. 25 news conference, we filed an open records request for the DA’s files on those cases. Under state law, the public has a right to know the outcome of criminal cases.

A month later, the DA’s office has not provided the records.

In February, Howard said her team started with a list of 794 Bibb County Law Enforcement Center (LEC) inmates, and at that point, they had worked through about two-thirds of that list, with 63 cases being released from the county jail.

13WMAZ requested the case files of those 63 people that DA Anita Reynolds Howard cited in that new conference, but her office denied the request.

In an email from an assistant district attorney, they claimed all the records were exempt from disclosure because they “may contain sensitive victim information, as well as medical information that would violate HIPAA” – the federal privacy law that protects your personal medical records.

They also claimed the records couldn’t be released because they were “pending prosecution” although Howard her stated in the news conference that the cases were “disposed” or “resolved.”

“Some of those individuals were guilty pleas, actually because of their sentence [they] would go to the Department of Corrections. Some are out on bond. Some of the cases were evaluated and dismissed. Some folks ended up going to Central State [Hospital],” said Howard.

Howard’s office also argued they didn’t have to grant the request because they had no list of the 63 people.

“This is ridiculous. This again goes to the heart that we must understand who is in jail and who is being released. It’s one of the most basic trusts in our institution,” said Richard T. Griffiths.

Griffiths is the spokesperson and former president of the Georgia First Amendment Foundation. His organization advocates for government transparency and access to public information. He says these records are of public interest.

“To see this most basic information being thwarted is a big red flag. It tells me perhaps there’s more to the story,” he said.

After a month of back and forth, the DA’s office said Wednesday they now intend to provide the records we requested. That will come at a cost of nearly $3,000 and take them an additional 30-45 days to put together, they say.

We will keep you posted on the progress and let you know what we learn from those records.

The Macon District Attorney’s Office sent a statement to 13WMAZ Friday afternoon saying, “This office is working to respond to that request within the bounds allowed by law. We will always be accountable, transparent, and responsible to this community.”