The 28-year-old Eastman native, who has lived in Macon since he graduated from Mercer University, started the trail in Weogufka, Alabama on April 30 and wrapped up his journey on May 5.

“It’s a very unique trail that we have down here in the South,” he said. “It’s the foothills of the Appalachia.”

Yawn says he has ran almost 13 100-mile races in his lifetime, many of them requiring a map and compass to navigate.

“I definitely gravitate toward the longer foot races,” he said.

The Pinhoti Trail is marked and winds almost 350 miles through the mountains and remote woods of Alabama and Georgia. Yawn says this trail is special to him because he has run and trained on it often.

It’s something he has wanted to complete for almost five years now.

“Breaking the record was what I went to do, but I also went just to finish it,” he said.

So, when COVID-19 caused a long-distance race he planned to attend to be canceled, he decided to seize the opportunity.

“I had to be completely honest with myself, there was literally never going to be a better time than now. I’m in an excellent physical condition, my wife and I don’t have kids, I have plenty of leave built up, with races being canceled my calendar is pretty much wide open, and the time of year is perfect,” he wrote in a blog post.

That’s when he took off time from working as an electronics engineer at Robins Air Force Base and planned to go. 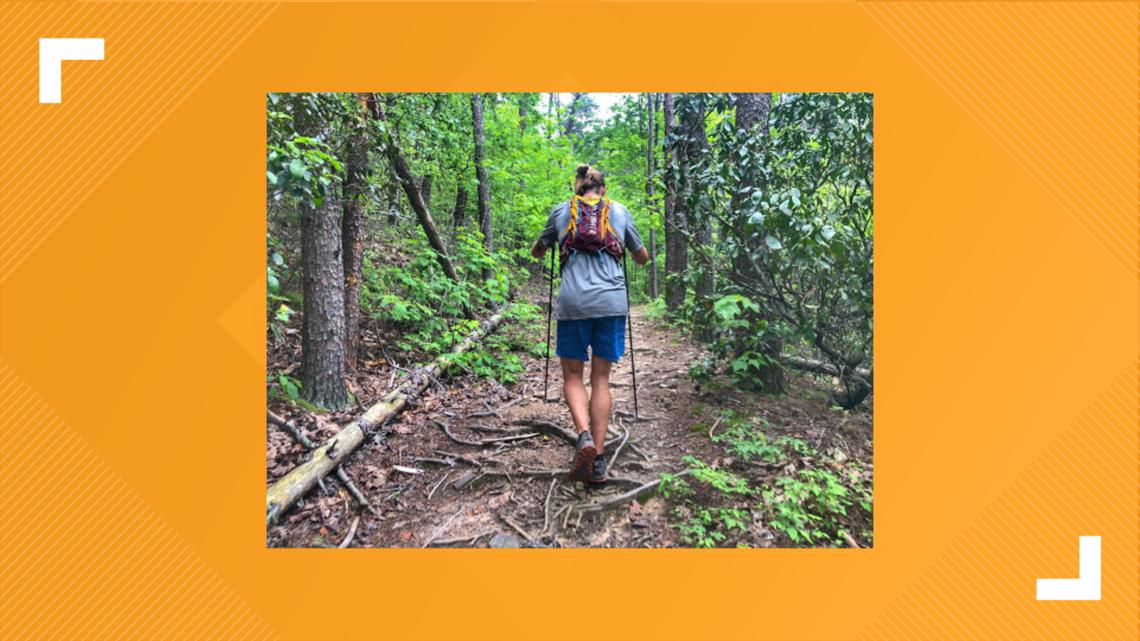 “I finally started taking this Pinhoti thing serious,” he wrote.

Yawn says some days were spent walking more than running, only sleeping about four hours per night.

By day three, he says he was almost burnt out.

“It was just the sheer mental fatigue issues where nothing physically was wrong, it’s just you’re tired from two previous days and you still had a long day ahead of you and multiple days after that.”

Yawn said he carried almost nothing along the way, only keeping essentials like water, snacks, and an iPod.

He did have some support. His wife, Mallory, and in-laws, Todd and Jamie Henderson, packed up an RV then followed Yawn along the way, meeting him at various road crossings and providing him a meal and a cot to rest his head on at night.

“They were an invaluable asset during the effort,” Yawn said.

He says he only slept around four hours a night, starting his mornings in the darkness and running several hours into the dark at night as well.

Yawn documented his journey on his blog, noting the number of miles he completed each day.

Day one he completed 74 miles, day two he ran 59, and day three was another 61 miles. Yawn ran additional 50 miles on day four and finished out the trail on his last stretch with 105 miles.

“I woke up knowing that this was going to be my big and final push. No more sleep until I was done,” he wrote in his blog.

Although this was Yawn’s longest single-effort race and he broke a record while doing it, he remains humble.

“Somebody could have come and broke the record the day after I did. It was no skin off my back,” he said. “It was something I did for more of a personal challenge to see what I can do and explore a different part of myself that I’d never been to."

Dublin Walmart holds graduation ceremony for employees in Class of 2020

'You can only play Monopoly so much': Georgia family holds at-home 'Chopped' competition