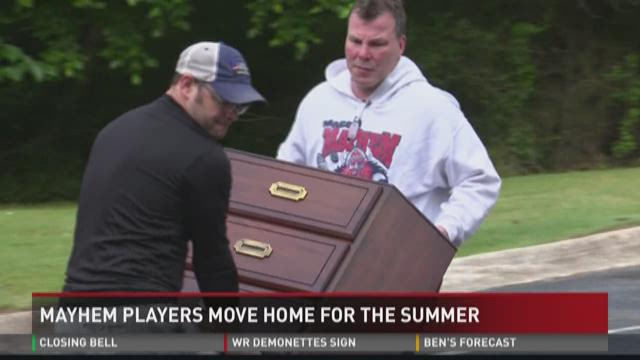 After winning the SPHL championship last week, a lot of Macon Mayhem players are heading back to their hometowns for the offseason.

"It's moving day," says Head Coach Kevin Kerr. "These guys are going to be heading home, some guys have already left earlier in the week."

Coaches and staff spent the day moving furniture out of the team's apartments.

"It's kind of one of those sad days. After we had a great season, now guys are getting ready to leave and do their thing and do their thing for the summer," says Kerr. "A lot of guys will be doing camps and different types of camps and staying busy doing hockey stuff."

Some will be looking for work.

"You know, you've got to pay the bills, right?" smiles Kerr. "I was kind of in the same boat during my minor league days. I'd go home every summer and work with my dad in the pool business and construction business all summer, and come September, I couldn't wait to get playing hockey again."

"Headed back to Los Angeles area," says John Siemer, who just finished his rookie year with the Mayhem. "I'll be running hockey camps, refereeing hockey, so basically just staying in the game."

"We're going to be headed back to, where are we going today?" Team captain Matt Summer asks his son, Mark Thomas.

Summers will find plenty to keep him busy.

"I just do little clinics and camps, one-on-one lessons, small group lessons," says Summers. "Then, in June, we go to Wichita. I used to play there, so we go run a big hockey school there, spend half the summer there."

Summers gets his son's attention.

"We had a mission from day one, high expectations of this organization and this team from day one of training camp, and they fulfilled every expectation that we ever had," says Kerr. "You know, we're going to be looking forward to repeating again next year."

And Summers plans to be a part of that run.

"Sure hope so, we got to defend that title and defend it the right way," he says.

Kerr anticipates a good number of players electing to return for next season. With a new team being added to the SPHL, there will be an expansion draft and Kerr can only protect 13 players from being selected for that squad.