Rachelle Wilson and Trent Mosely are working to preserve the Guy E. Paine house. It's more than 100 years old and was once listed on Historic Macon's Fading Five. 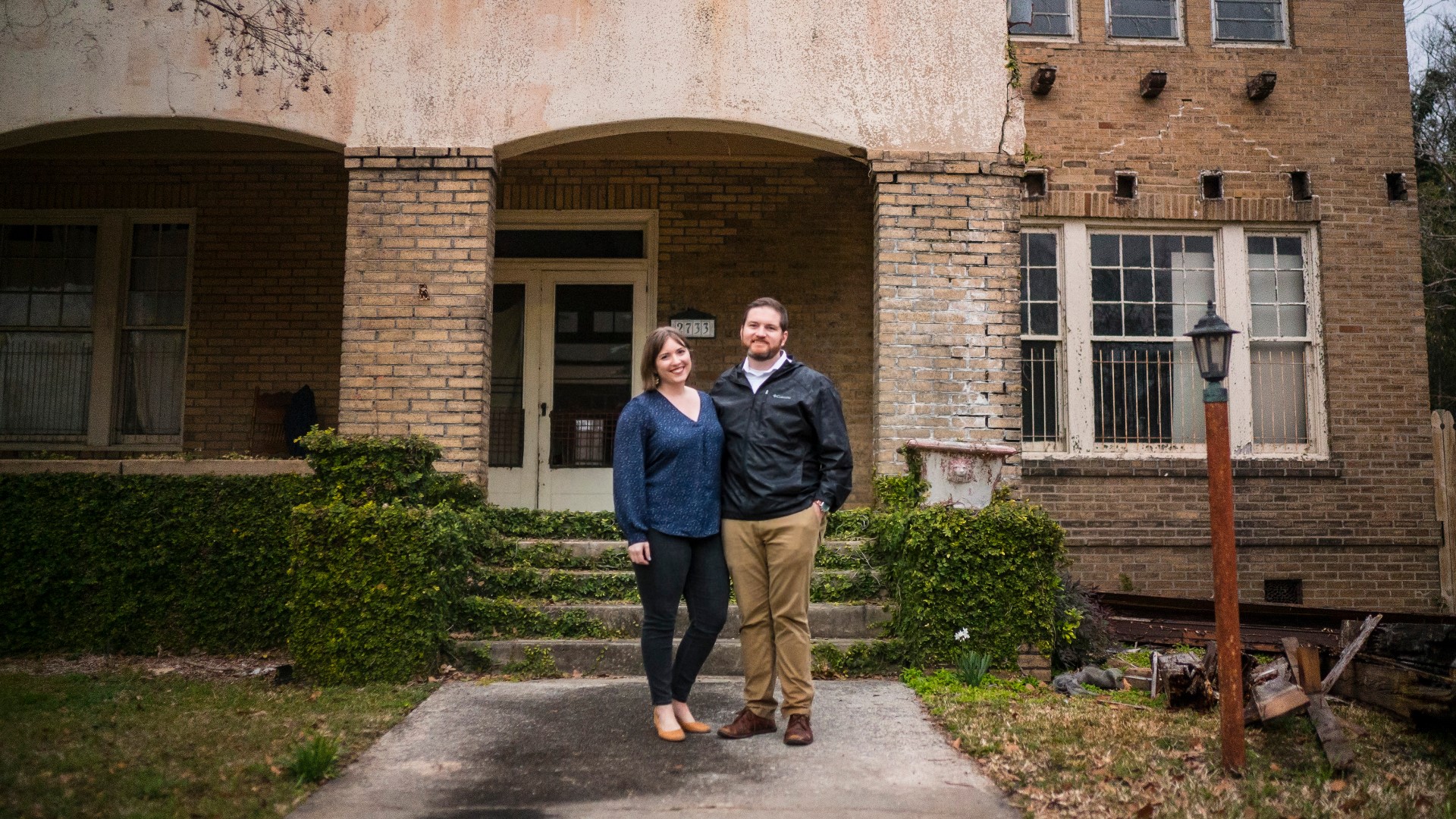 MACON, Ga. — A young couple is taking on the challenge of giving an old house new life.

The home at 2733 Hillcrest Avenue has sat there for over 100 years. It was deemed one of Macon's Fading Five – a list of the city's endangered historic properties that leaders say should be preserved, curated by Historic Macon Foundation.

Located in the Cherokee Heights district, the first owner of the home was a man named Guy E. Paine who was recruited from Chicago to work for the Penn Mutual Insurance Company. The house has been foreclosed twice since 1988.

“It’s pretty much left to decompose since then,” Trenton Mosely said. “We’re in love with it and we want to fix it up and make it as beautiful as it was.”

Overgrown with weeds, the Italian Renaissance-style home sat vacant for over 20 years. Rachelle Wilson and Trent Mosely decided to change that.

“We got engaged in the house the day we closed on January 15,” Wilson said.

The couple met in November 2018 when they were both working with organizations involved with historic preservation -- Mosely with a custom woodworking shop and Wilson with Historic Macon. That’s how they came across the Guy E. Paine House.

Wilson was responsible for photographing the buildings for the Fading Five.

“As we started dating, we used to come by, we used to drive by and just look at it,” Wilson said.

The house features several bedrooms, bathrooms, a second floor, and a large living room. It also has an atrium in the center, where the celling is made of glass to let the natural light beam through and sun kiss the living plants that grow inside the home.

“We just started falling in love with it and we started dreaming of our lives here together and seeing our future with this house,” Wilson said.

They're starting to re-build and renovate this house on Hillcrest Avenue, so they can start building their life together inside of it together too.

"Primarily we want to keep the spirit of the house alive. I mean, there’s a lot of things we could do to change the house considerably, but it’s so unique. I think to change it would almost be criminal because it’s so beautiful on the inside and out,” Mosely said.

In under a month, Wilson and Mosely cleared plenty of plant overgrowth, re-plumed the home, pumped water out of the basement and re-sealed it, started remodeling the bathroom and more.

They’re working on preserving the history as much as possible.

“There’s still a lot of blank canvas to it,” Wilson said.

Wilson and Mosely say their love of history, preservation, and Macon brought them together. They say the home is a “physical embodiment of all the things” they bonded over.

“I think it’s really going to create a special bond between us and be a special thing in our lives and hopefully something we can live through the rest of our lives happily in,” Mosely said.

Wilson says not everyone was on board when the couple first purchased their home.

She says they want people to join them in seeing what this home and many other homes in Macon can be.

“This house is for us, but there are other houses in town that can be that for somebody else,” Wilson said.

The new couple is sharing their preservation story on social media, bringing the community along for their ride to restoration.