The small kitten appeared in the bank's drive-thru lane after a black Cadillac Escalade pulled away. Two boys waiting in line grabbed the cat and named him, "Banks." 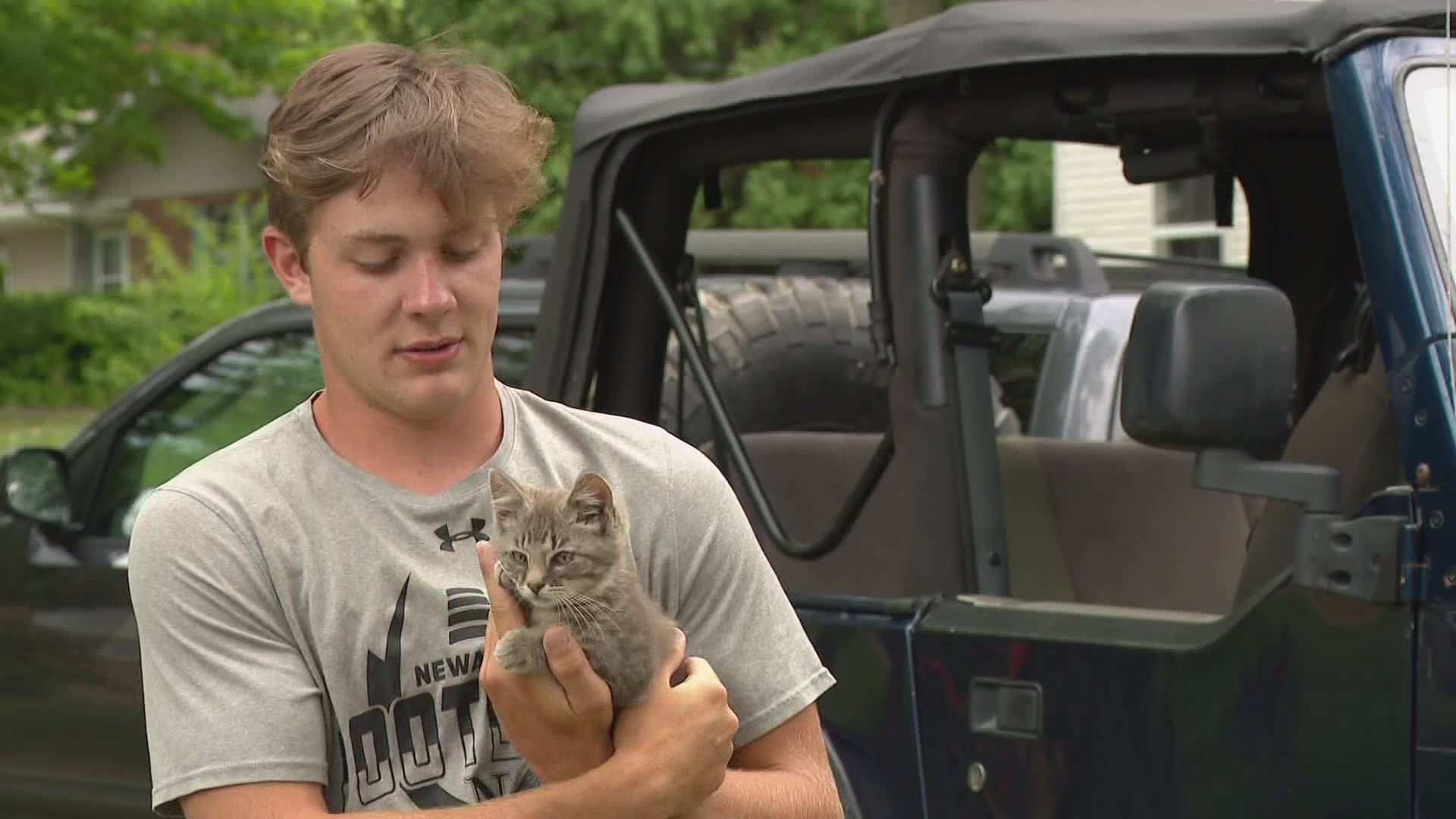 Those activities constitute the majority of what takes place when people pass by the bank drive-thru, right?

It's a pretty simple process. Drive up; card in; cash out.

Except for a recent transaction in Fremont when, instead of cash out, it was 'cat out.'

On Friday, July 24, Jarrod Wismar and Brandon Badgero needed to go to a bank to cash a check. They were in Fremont, and needed the money to go to a local sporting good store to purchase some football gear for the upcoming football season at Newaygo High School.

The boys say they pulled into the Choice Bank in Fremont around 1:30 p.m. Friday.

"There was two cars ahead of us so we waited to see which one went first," said Brandon, 17. "A black Cadillac Escalade drove up to the drive-thru, and when it pulled away, there was a small kitten that was just sitting underneath it."

Jarrod quickly opened his passenger door, got out, scooped the kitten up and got back into his vehicle.

"We could see under the [Escalade] from where we were in line, but didn't see the kitten until it left," said Jarrod, 18. "I'm certain the cat dropped from under the Escalade."

The boys pulled up to the drive-thru, completed their transaction, then decided to drive up to the bank teller's window to explain what had happened.

Credit: WZZM
The ride in the undercarriage of the Cadillac Escalade was no doubt harrowing for "Banks" the kitten, who is seeking a loving home.

The boys left the bank and decided to go to Bellwether Harbor, which is an animal shelter and training center in Fremont.

"Bellwether said they couldn't take the cat either, so we brought it to my sister, Casey's house, which is where it's been since." said Jarrod.

Once the kitten was settled at Casey's, the boys decided to give it a name.

"Banks," said Jarrod. "We found it at a bank, so it seemed fitting."

After nearly three days at Casey's home in Grant, the kitten seems to have nothing wrong with it. Banks has been eating, playing and using the litter box - acting like any normal kitten would.

Brandon, Jarrod and Casey are hoping somebody will offer to take Banks and give him a nice, loving home.

Credit: WZZM
The ride in the undercarriage of the Cadillac Escalade was no doubt harrowing for "Banks" the kitten, who is seeking a loving home.

If you're interested in Banks, Jarrod's sister, Casey would like to hear from you. Casey's email address is: wismarcasey@yahoo.com

If you have a story that should be featured on "Our Michigan Life," email 13 On Your Side's Brent Ashcroft: life@13onyourside.com

More Our Michigan Life stories from 13 ON YOUR SIDE: