Linda Gawkowski started it in 1966. Her daughter, Katy Kohley, got the honor in 1995. Then Katy's daughter, Alaina Kohley, completed the hat trick in 2021. 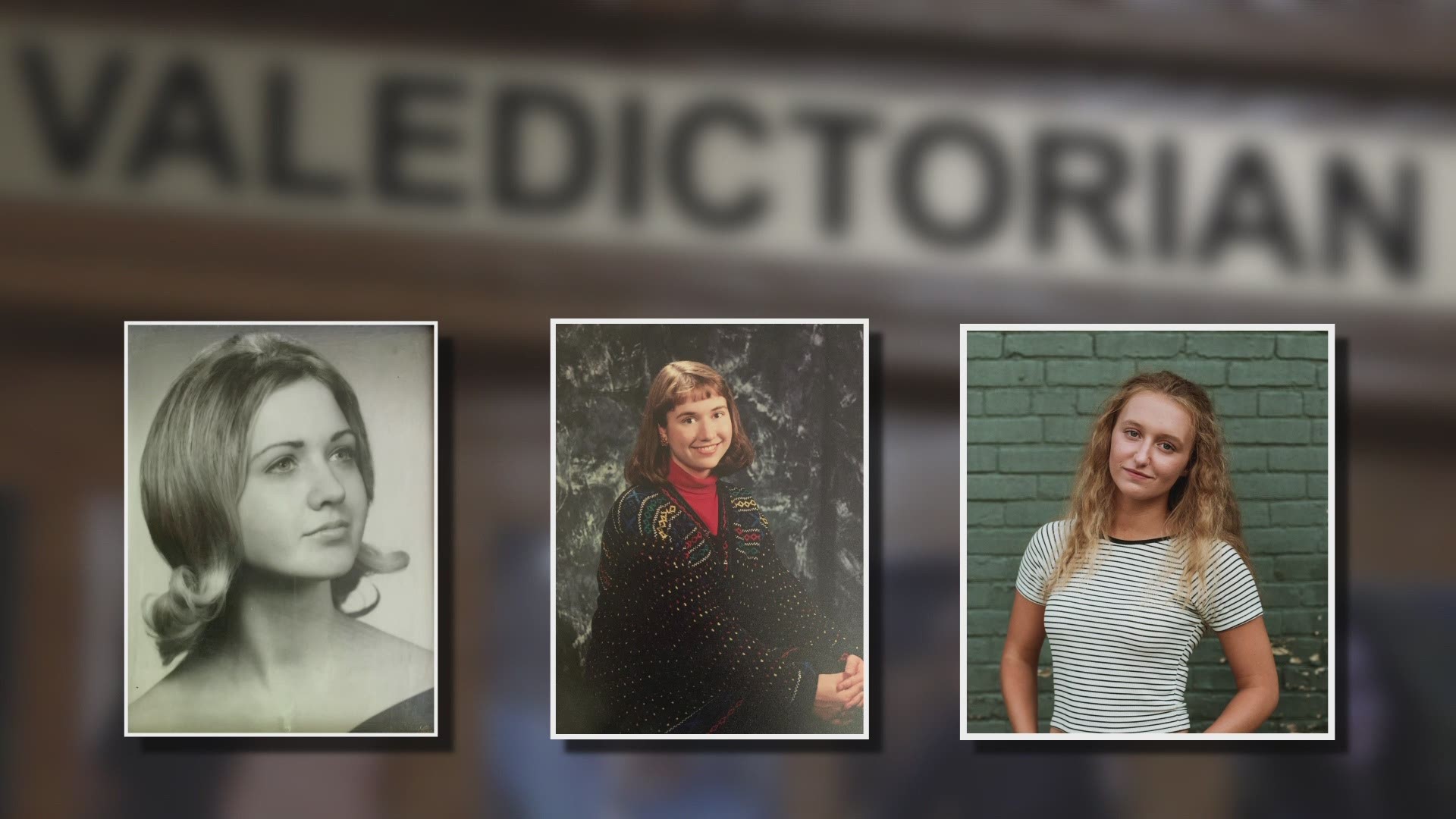 MUSKEGON, Mich. — It is graduation season, and one 2021 lakeshore graduate is carrying on quite a unique family tradition. The Muskegon Catholic Central High School scholar is in 'rare air', becoming her family's third-generation class valedictorian.

When Alaina Kohley turned her tassel at MCC's graduation commencement this past weekend, she extended a family legacy that goes back 55 years.

"My mother started it all," said Katy Kohley. "There was never any pressure on me to achieve the honor."

Katy followed in her mother's footsteps, becoming the school's valedictorian in 1995, sharing the achievement with two other classmates.

Credit: Katy Kohley
Katy Rafferty-Kohley poses for a photo with her parents, Linda Gawkowski-Rafferty and Joseph Rafferty, at her MCC graduation in 1995.

"I wanted to do it for me, but it was really neat afterwards knowing my mom and I both carried that honor from the same school," added Katy, 44.

After high school, Katy would eventually get married and would have a daughter she and her husband named, Alaina.

"When Alaina was born, we never thought, 'Oh, I have to make sure she becomes valedictorian,'" Katy joked. "But, it was evident very early on that she possessed intelligence and drive."

Katy says when Alaina got into junior high school, she told her about the valedictorian accolades, and if Alaina wanted to pursue it, too, she'd do it naturally and without pressure.

"We never sat down and said, 'Hey kiddo; you can do this. Let's put your nose to the grindstone.'"

But Alaina did that anyways. She graduated with a 4.0 GPA, which she'd maintained al four years at MCC.

Credit: Amy Carroll
When Alaina Kohley was named Muskegon Catholic Central's 2021 class valedictorian, she was her family's third-generation to do it.

"I wanted to make my nana and mom proud," Alaina, 18, said. "I knew if I worked hard enough for it that I would be able to achieve it."

Alaina says she found out she'd been named the 2021 class valedictorian on the evening of May 14, which also happened to be her birthday.

"The first thing I did was run downstairs and tell my mom and dad that I was named valedictorian," Alaina said. "Then I thought, 'This is really cool that this achievement has now carried through three consecutive generations in my family."

When Katy heard the news, she says it made her emotional.

"I was proud and so happy for [Alaina] but at the same time I was sad because i so wished my mother could be here to share it with us."

Linda Gawkowski passed away in 2007 at the age of 59 after battling breast cancer.

"I know she's looking down and is so proud of Alaina and this accomplishment," added Katy.

When asked if Alaina feels pressure to keep the tradition going with a 'Kohley-Family-Four-Peat' valedictorian, she replied by saying, "We'll see. I'm not looking that far ahead yet. I'm going to take it one step at a time by starting with college."

Alaina says she'll attend the University of Michigan beginning this fall and plans to major in neuroscience and minor in the sociology of health and medicine.

It's a good thing she's great at studying because there's a lot more school ahead for her. She says she'll eventually go into pre-med.