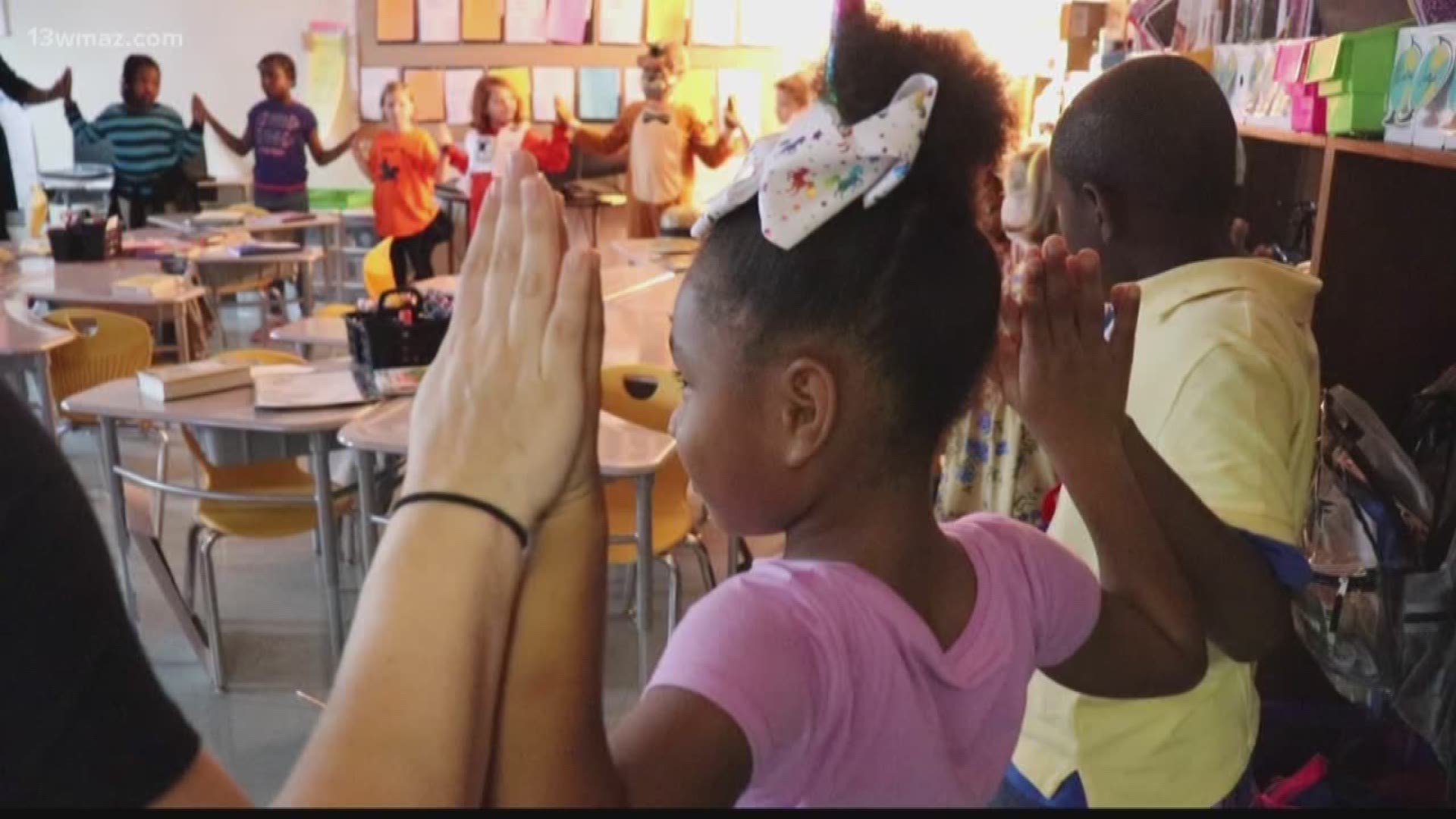 MACON, Ga. — As the morning announcements wrap up, a group of third graders put their hands to their hearts and close their eyes.

“Take a deep breath in,” Maria Andrade, a breathing instructor, says to the group. “Exhale. Feel the rhythm of your own breath. Tell yourself what you’re going to need today to make it a great day.”

For the next few minutes, she leads the students through a series of deep breathing exercises. They're designed to help participants be more mindful of their emotions and responses as a way to have better self-control and ultimately better self-esteem.

“There are also emotional and physiological benefits to deep breathing,” Andrade said. “It changes our brain chemistry and it creates better sleep habits, better work habits. And ultimately the dream is that children can use these tools to stand at attention instead of be in detention.”

The practice is an example of the kind of low cost but potentially high impact intervention educators could use to address behavioral issues and stress in the classroom.

The breathing is part of a pilot at two Bibb County schools that Andrade hopes to bring into more area classrooms. The program is relatively simple -- four deep breathing techniques that take about four minutes with an aim of doing it for at least 40 days.

“40 days is what research has shown it takes to create a habit,” she said. “So we ask teachers to do it for 40 days to basically create a new habit.”

Since September, Andrade has gone to Alex II Magnet School and St. Joseph’s Catholic School to guide classes through the breaths that are part of a larger initiative known as On the Same Breath. She generally visits each class once a week and has teachers continue the practice until she is back the following week.

“The feedback I’m getting is that it really calms the students, that they are starting to ask for it because they enjoy taking that four minutes for themselves during the day,” Andrade said. “And some of the younger students, when they really start crying hysterically, the teachers have used that to calm them down.”

Schools in places like Baltimore and Chicago have seen positive results from implementing time for mindfulness exercises into their curriculum. A 2019 analysis of research published in the journal of “Aggression and Violent Behavior” suggested “mindfulness practices may offer low-cost intervention to reduce stress and violence in the community…. there is ample support that mindfulness can reduce stress and aggressive behavior.”

While the breathing pilot is new to Bibb County, it’s not new to Georgia. Cheryl Crawford grew the initiative out of a yoga program she started back in the early 2000s in the Atlanta Public Schools.

Crawford was a teacher, reading coach and curriculum specialist for years until she had triplets and took time away from the classroom. She started teaching kids yoga when her girls were young and moved programs into the schools as she was asked.

“I was pioneering this whole thing,” Crawford said. “I didn’t know anyone else teaching yoga in schools anywhere, especially in Georgia.”

Over the years, she has used feedback from students to simplify the yoga into two breathing programs or “quests” with plans to add a new one each year. The initiative had been called Georgia Breaths, but the name recently changed to On the Same Breath to reflect interest in the techniques outside of Georgia.

The “Rise Up” quest is focused on moving from worry to wonderful and “Get it Together” is about releasing anger into action and compassion.

“We talk to the kids too about how anger is not a bad thing, but sometimes they are emotions that aren’t serving us in certain situations,” said Andrade, who is training with Crawford and executive director of the program. “There’s lots of very famous people who turn their anger into change and positive change … but if you’re in school and you’re angry because you’re not getting to sit where you wanted or the test wasn’t what you thought, that anger might not serve you.”

Crawford has created physical kits for the quests that include drawings and instructions for each of the four breaths and offers them at cost -- $40.  She wants the program to be accessible so a school can share materials and even use materials she has online at no cost.

“The main tenet is to breathe deeply and connect to the breath purposefully,” Crawford said. “We all have access to it. Breath is free.”

Crawford said she has years of anecdotes from students who share with her the importance of the techniques. This includes one from a student she said was often referred to as “the meanest kid in the school.”

“He was very violent, very angry,” Crawford said. “And he came up to me when I was teaching in high school many years later. I didn’t recognize him and he said ‘Those breathing techniques that you taught me  -- I’m doing them. I’m still not a nice person but I’m not so full of rage anymore.’”

Crawford has bins full of drawings and written work students have sent her about their experiences. This along with social media messages from other former students gives lots of anecdotal evidence of the benefits of the breathing.

It is the promise of what these techniques can do that is driving the Georgia Department of Education to put the program in schools on the state’s turnaround list -- a list reserved for those with college and career ready scores in the bottom five percent of the state.

“When we started to look at these (turnaround) schools and these communities that they’re in and wonder why are these schools historically failing? Why aren’t they able to make progress,” said Mary Salvatore, who is the health and wellness coordinator for the state’s Chief Turnaround Office. “You have to think about the setting that the child is growing up in and what their surroundings are and what they’re coming to school with on their back every day.”

She said sometimes this means they didn’t get dinner the night before or there is stress and trauma in the home that then makes it difficult for the child to focus on academics.

“There’s a lot of research behind those things really affecting a child’s capacity to learn during the day and to be engaged and focused in the classroom,” Salvatore said.

A friend told Salvatore about On the Same Breath, and she was all in after observing Crawford go through the techniques with a group of first graders, who then told her how it kept them from acting out.

“To hear that coming out of such young kids mouths, that they’re able to articulate their feelings and how that breathing is affecting them,” Salvatore said. “I just thought this is the coolest thing, and you know how can we get this into our schools?”

Salvatore is working with Communities in Schools site coordinators in several locations, including three in Bibb -- Ballard Hudson Middle, Appling Middle and Veterans Elementary -- to implement the breathing. The site coordinators at each school are being trained and she hopes they can start using it with students who often have attendance issues and frequent discipline concerns.

Salvatore sees the program as a way to improve classroom management without burdening teachers with some extra or a new curriculum.

“Here are some things that are really just very simple, something that takes less than five miniutes to work into your day,” she said. “And that might end up getting you back 15 minutes because now your kids are focused and you know prepared to sit and learn.”

A professor at Georgia State University is also working on research that could provide hard data on the benefits of deep breathing. Dr. Erin Mason, who works in the College of Education and Human Development, has embarked on a multi-year research project that will look at the On the Same Breath initiative.

She reached out to Crawford last November and this fall has started interviewing staff at schools that are implementing the program. Next, she will interview students who have done the breathing.

Mason, who once worked as a school counselor, said they’ll use the interviews to build a more focused study on how this might be an effective intervention in schools. She’s already hearing anecdotally that there are benefits for the students and staff as well.

“One of the things that is important to me is the focus on building autonomy in these students so they have a coping skill that they can use,” Mason said. “I think the breaths really help with that because they’re simple. They’re easy for students to learn … and they’ve got something they can do for themselves when they’re in the heat of a moment that’s stressful or brings up anger or frustration.”

“I really love that we’re changing the records kids play in their heads for themselves,” Andrade said. “They get to a certain age and they start saying, ‘I can’t, I won’t, I’m not’ and I love talking to them about how they can and they will … rise up from whatever it is, personal or  social that’s affecting their best self.”

Andrade is creating her own branch of On the Same Breath with ABCbreath and is in talks with Bibb and other area schools to bring the program into more classrooms.

In the third grade classroom, Andrade brings the breathing to a close. The kids stand in a circle and repeat a short mantra.