Two men were honored by Tempe PD on Wednesday for stopping an alleged sexual assault on Saturday. One of them is an offensive lineman for the New England Patriots. 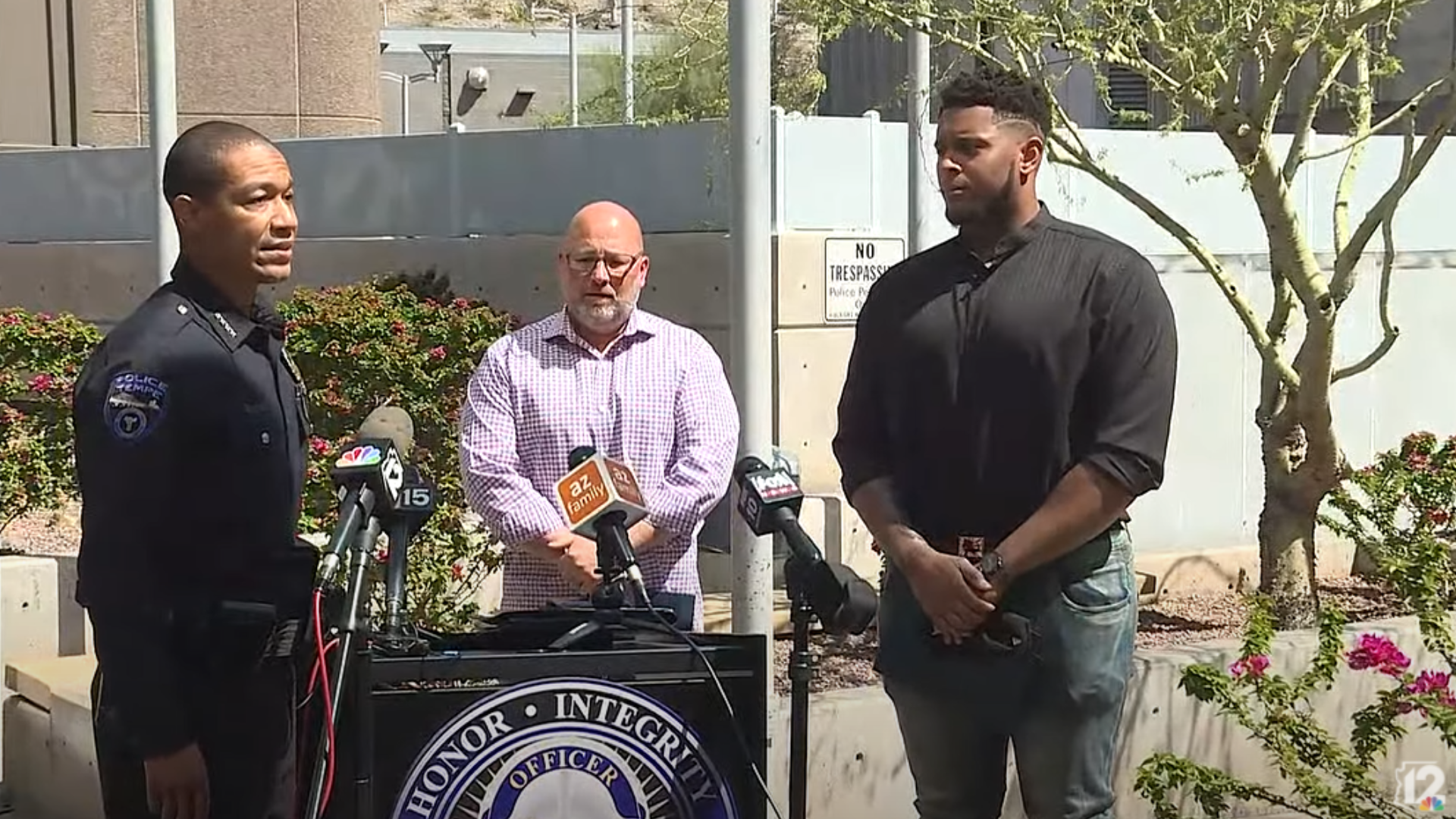 TEMPE, Ariz. — Tempe police held a press conference on Wednesday honoring two Good Samaritans who stepped in to stop a sexual assault at Kiwanis Park in Tempe on Saturday.

The suspect, who has been identified as 30-year-old Kevin Caballero, was seen pushing the 71-year-old victim to the ground and attempting to remove the woman's pants, police said.

Two men intervened in the attack and detained the suspect until police could arrive.

"If not for the swift actions of Mr. Justin Herron and Mr. Murry Rogers, this vicious attack could've been much worse," Tempe police Det. Natalie Barela said.

Justin Herron is an offensive tackle for the New England Patriots and is in Arizona for offseason training. Murry Rogers is a Phoenix resident who happened to be in the park that day. Neither knew the victim prior to the incident.

Herron said he heard screaming that made him aware of what was going on and said he knew at the moment that he had to get over there.

"At that moment, I was in shock," Herron said. "It was 11 a.m., middle of the day, in a very open field and the fact that it happened there at that time was just very shocking. I wish I could tell you what I was thinking, but I could just tell someone needed help. All I could do was rush myself over there to make sure I could help the victim and I could comfort her and be the best person I can be."

Herron is an offensive lineman for the Patriots, who stands at 6-foot-5 and nearly 300 pounds.

"I'm a football player, I'm kind of big. I try not to be too aggressive with people knowing I could potentially hurt somebody," Herron said. "I do have a loud voice. I yelled, told him to get off of her and then yanked him off and I told him to sit down and I told him to wait until the cops come."

When asked if he had any experience in crisis situations, Herron said no, but his parents raised him to help people in need.

"My parents always talked to me about it, if there's someone in need, make sure you can help them and be the best you can be," Herron said. "I don't want this to happen again, I don't want to have to save someone else's life again, but I'm glad I was able to save someone's life on Saturday."

Herron and Rogers met with the victim again this week. Herron said it was heartwarming to see her, but gut-wrenching to see the trauma she is dealing with.

"Nobody should have to go through that," he said.

Rogers said he happened to be there to help because he was at the park earlier that morning reserving a spot for his 15-year-old's birthday party.

He said, like Herron, he couldn't believe what he was witnessing.

Rogers said he and Herron ran toward what was happening screaming for the attacker to get off of the woman.

"After he got off of her, we looked at each other and said we need to make sure he doesn't go anywhere," Rogers said.

Rogers said he wanted to give Herron credit for taking the victim aside and removing her from the area where the attacker was.

Rogers said it was very emotional seeing the victim again this week.

"Over the past several days, I have thought about her and pictured her face, so it was really nice moment, and I'm really glad I got to meet her."

Rogers said the victim called him and Herron "her angels."

The two good Samaritans don’t see themselves as heroes, but their thoughts are with the victim who suffered minor injuries and is said to be doing well while dealing with the emotional trauma.

“We’re there for her. We’re always praying and thinking about her, and I just wish her the best,” said Rogers.

“If someone needs your help, go help them. I never thought this would happen, and I don’t want it to happen again,” said Herron.

Officers said the Tempe Police Department Special Victims Unit is working with other agencies in the Valley to determine if there are any other incidents Caballero may have been involved in.

WATCH THE FULL PRESS CONFERENCE BELOW: