Although he's only 5-months-old, Goose is making a long-term difference in the lives of patients who need prosthetics 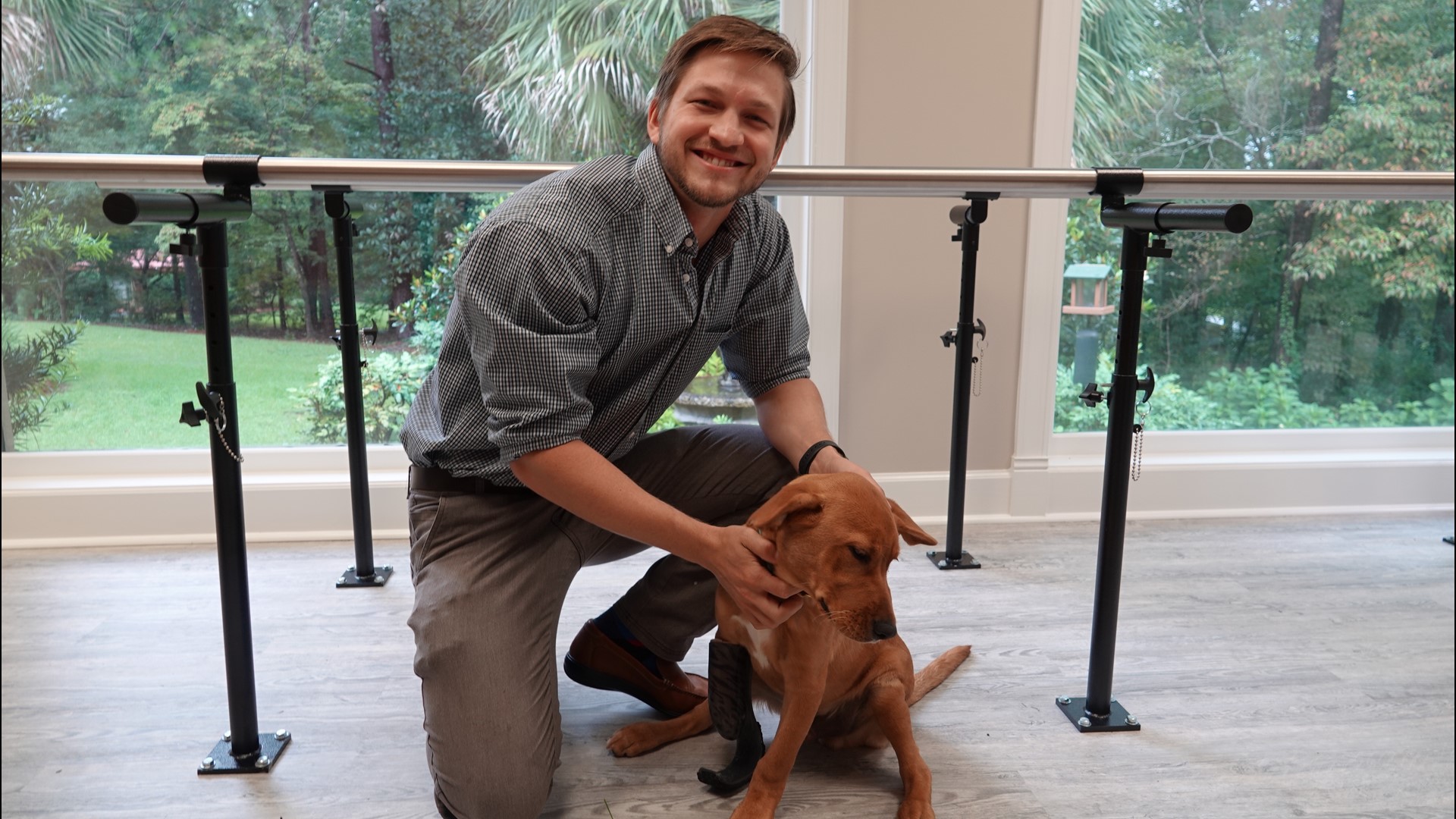 MACON, Ga. — You've heard the saying 'lend a helping hand,' but one Macon prosthetic's office is adding a paw to the mix.

Resident of Prosthetics and Orthotics, Chris Scrivner, and his dog Goose met when the pup was between 10-11 weeks old.

Goose’s breeder was looking for someone to help find a solution for his missing paw.

Scrivner made paws for dogs before, but when he found out that Goose was also up for adoption, he and his wife immediately drove to take the red fox lab home.

Goose is now 5-months-old and is already making a difference in people’s lives.

“We made him a leg on the first day and he started walking within an hour, and so it was really, really impressive that he was able to adapt so quickly,” said Scrivner.

Now, Goose gets a new paw every few weeks to accommodate his rapid growth. As he’s grown, Scrivner has adapted the design and thinks his current paw is his best yet.

The paw is made out of strong plastics with a foam liner in the socket and tire tread material at the bottom of the paw -- similar to the sole on a shoe.

Goose has a crate at each location of Boland Prosthetic and Orthotic Center that acts as his personal “office” and just like his owner, he sees patients every day.

“He’s been awesome. He’s been a huge blessing to our patients and to our family,” Scrivner said.

He says Goose has been especially helpful with patients who might be nervous during appointments. He says the pup has “some magic powers,” especially with children.

“I had a little boy that didn't want to get his cast done and Goose came in and I was like ‘I just put a cast on him this morning' and he was like 'oh okay' and so from then on he was cool, like he just relaxed and let me do it,” he said.

Scrivner has been passionate about prosthetics since he was a child. He says that the work he does is rewarding because he gets to help people when they are meeting a significant life obstacle.

“I believe it's really cool to be able to be the person that someone comes to probably when they’ve hit the biggest obstacles in their life and you get to come up with a creative solution to get them over that hurdle,” he said.

He says he wishes more people were able to see the world of prosthetics and had the exposure he had at early age. What attracted him to prosthetics was the possibility of seeing patients throughout their entire lives.

If you or your dog is in need of care, Scrivner says to give Boland Prosthetics and Orthotic a call and that they will try to find a solution. You can see more of Goose on his Instagram.

RELATED: Son of fallen deputy gets special escort on first day of kindergarten