He was killed after in an officer-involved shooting in Atlanta on Friday, June 12. 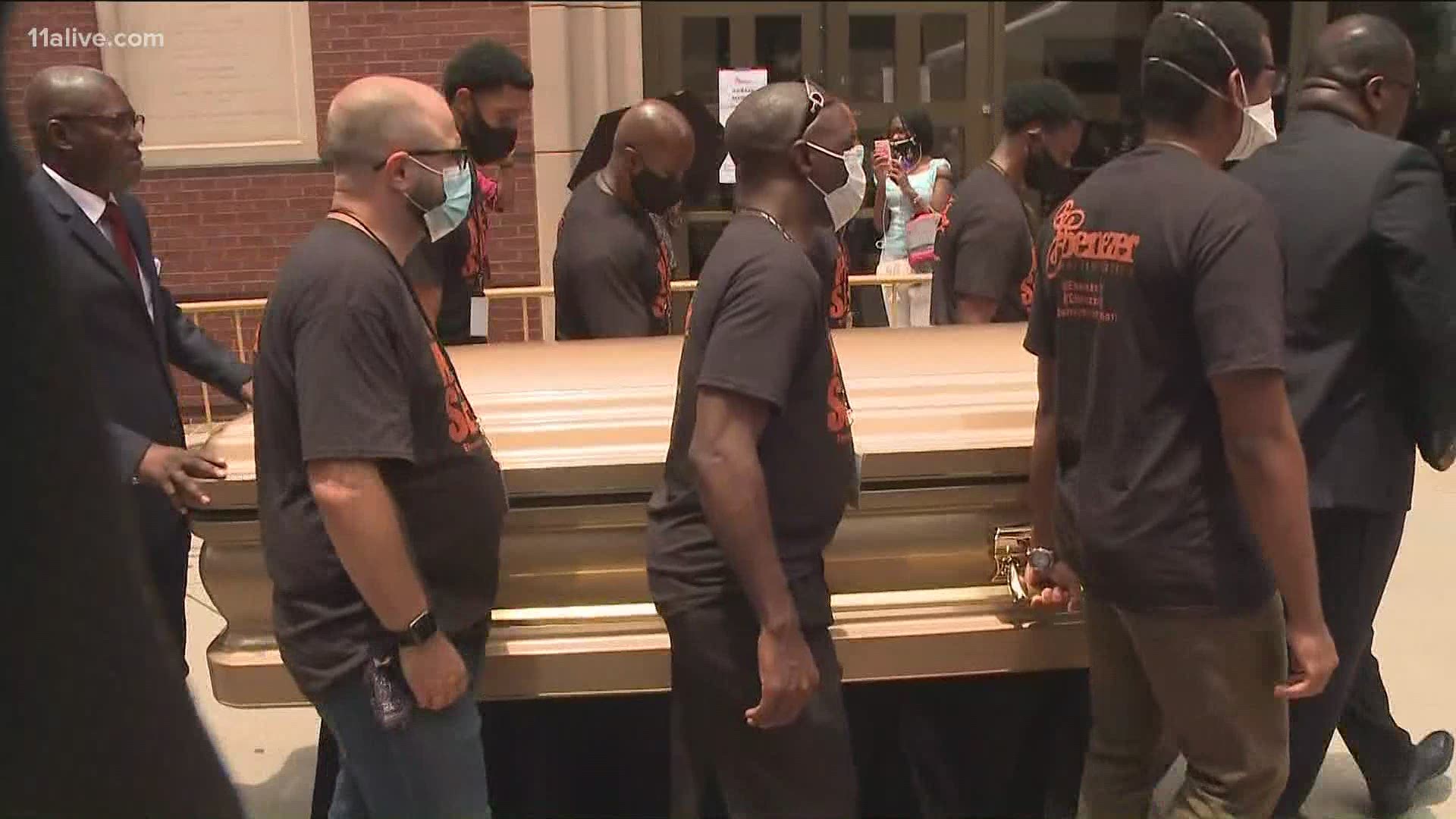 ATLANTA — More than a week after the death of Rayshard Brooks -- and following days of demonstrations in southeast Atlanta, a public viewing was taken place on Monday.

Brooks, 27, was killed after in an officer-involved shooting in Atlanta on Friday, June 12.

The public viewing was held from 3 p.m. to 7 p.m. at the Horizon Sanctuary at Ebenezer Baptist Church at 101 Jackson Street in northeast Atlanta.

11Alive's Joe Henke was outside of the church as guests arrived.

"I sympathize with his family. I also sympathize with the officers as well. I understand they were doing their due diligence, however, I do believe he took a stand for his life, " said Latoya Spikes.

She and her daughter were first in line for the visitation.

"This is history for me. I've never seen the unrest of people passing away just because of police brutality," she said.

Others who talked to 11Alive said they came out because they were worried about their own family when hearing about Brooks' death.

One man told 11Alive he is confused after hearing about the stories of George Floyd, Ahmaud Arbery, and now Brooks.

"I thought this would at least cease after the one in Minnesota," he said. "But then all of a sudden this one right here comes up and then the one further south comes up."

"Why can't the madness stop," he added.

A group of men escorted Brooks' golden casket inside of the church. The church where the Rev. Martin Luther King Jr. and his father preached also will host Brooks’ funeral on Tuesday at 1 p.m. Ebenezer’s Rev. Dr. Raphael Warnock will lead the funeral. Following the service, Brooks’ internment will be private, according to Willie A. Watkins Funeral Home.

- No large purses/bags.
- Purses/bags larger than 6x6 inches subject to search.
- All people entering will undergo security screenings.
- Ebenezer Baptist Church does NOT permit weapons inside.
- COVID-19 screening will occur upon entry, including temperature checks. Guests with temperatures will NOT be permitted inside.
- Face masks MUST be worn inside the building at all times.
- No cameras/cell phones or photography inside the sanctuary. This will be strictly enforced by security.
- Jackson Street and Auburn Avenue will be closed surrounding the church.

BACKGROUND ON THE CASE

Brooks was shot and killed during a confrontation with Atlanta police officer Devin Brosnan and officer Garrett Rolfe in the parking lot of a Wendy's on  University Avenue in southeast Atlanta.

The interaction between Brooks and the officers began as a DUI call when the officers responded to a report of a man sleeping in a car in the drive-thru line. A scuffle ensued and Brooks took the officer's Taser. As he ran away, the Georgia Bureau of Investigation said Brooks turned to fire the Taser -- which is when Officer Garrett Rolfe shot Brooks two times.

Since the night Brooks was shot, demonstrators gathered at the restaurant as well as the Zone 3 Atlanta Police Department precinct to voice their displeasure.

Fulton County District Attorney Paul Howard charged both officers in the incident, including a felony murder charge for the officer who pulled the trigger.

1 / 7
AP
A single white rose sits on the coffin cover during Rayshard Brooks‚Äô public viewing at Ebenezer Baptist Church on Monday, June 22, 2020 in Atlanta. Brooks, 27, died June 12 after being shot by an officer in a Wendy's parking lot. Brooks' death sparked protests in Atlanta and around the country. A private funeral for Brooks will be held Tuesday at the church. (Curtis Compton/Atlanta Journal-Constitution via AP, Pool)

'We will not tolerate lawlessness' | Interim APD chief addresses tensions but reaches out to protesters, officers