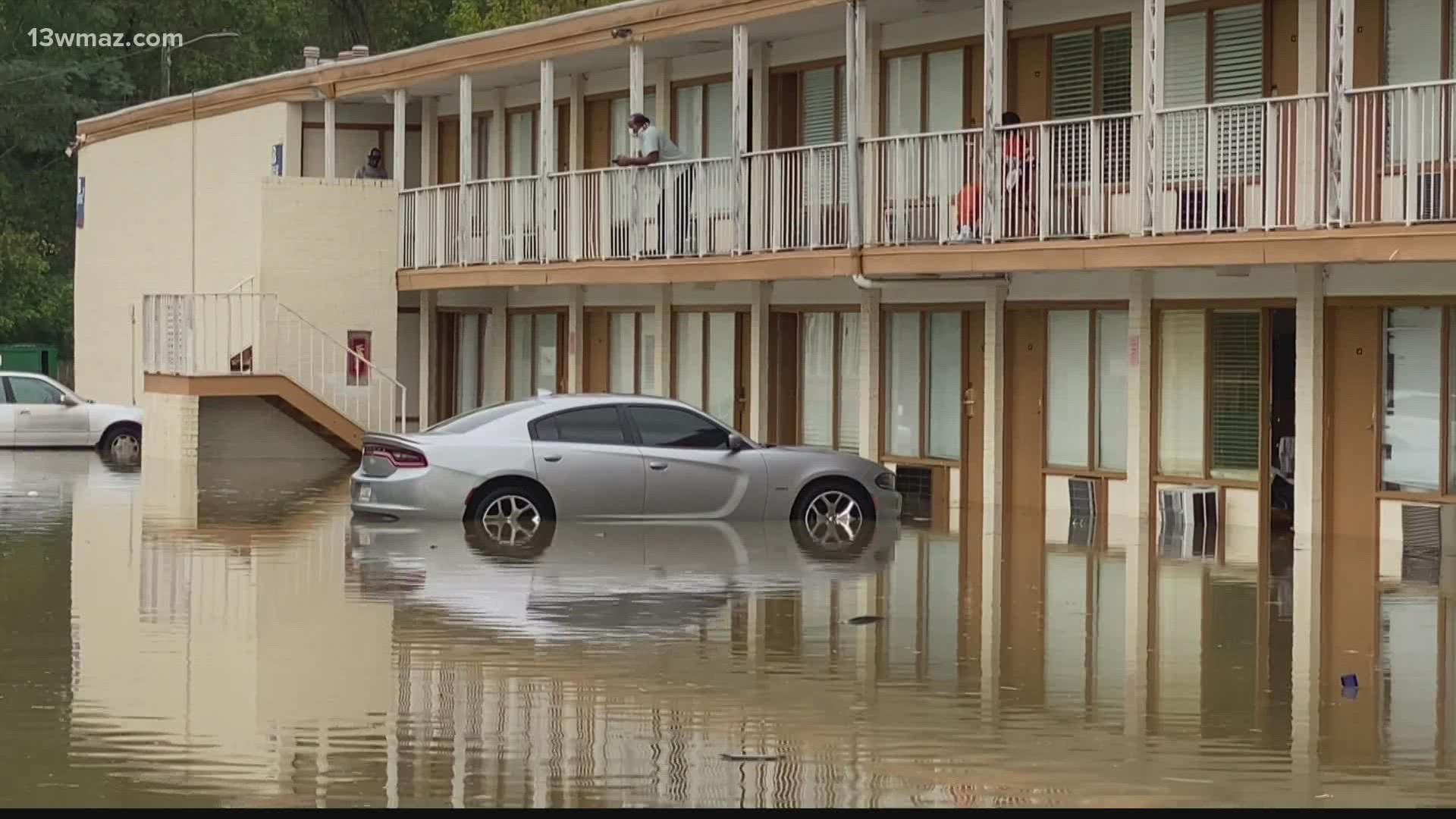 MACON, Ga. — When the Macon Water Authority paused to recognize workers’ recent Platinum Award for excellence, not all the honorees made the meeting.

This week’s record rainfall, dropping in torrents at times, kept crews working around the clock as pockets of stormwater problems simultaneously gushed for attention.

Macon-Bibb County Commissioner Bill Howell, who serves as a county representative on the authority, mentioned 121 separate flooding calls Wednesday, which saw 3.06 inches of rain – the highest in history for that date.

“It’s no surprise to anybody what happened yesterday,” Howell said in Thursday evening’s meeting. “We were bombarded with all the rain we had, especially in my area of the county. I know I started getting calls about 6:30 in the morning.”

Thursday morning, Howell cruised back through the trouble spots in his community to the “choke point” on the south side of the county. Judging by a photo from the day before of Oliver Bateman’s partially submerged deer stand, Howell’s pickup would have been underwater in the spot where he stopped on the drive.

Across neighborhoods, drainage ditches and creeks raged, some threatening homes or pooling into makeshift ponds that were dry ground last week.

Kate Kubesheski, director of wastewater operations for the authority, said things were getting back to normal after last year’s mechanical failures, abundant rain and troubles at plant  – until this week’s deluge.

“We had a lot of rainfall in a very short period of time,” Kubesheski said. “If we had had that rain stretched out over several days, the flows of the plant would have gradually gone up.”

Instead, the system was so overwhelmed, a fourth pump was needed, she said.

An unusual amount of solids from the adjoining Graphic Packaging plant had been settling out in the aeration tanks in recent weeks.

“On Tuesday afternoon in less than an hour’s time, we went from 22 million gallons per day to 38. Then we had more rainfall and it pushed us into the mid 40s,” Kubesheski said.

Thursday’s break in the rain helped conditions settle down at the plant as they continue to adjust valves and pumps to slowly get back to normal operation.

“All we can do is react to stuff as it’s happening and keep trying to move the solids and the flow around until we can get everything contained,” Kubesheski said.

The authority also learned it may not be permitted to fully accept esponsibility for the county’s stormwater enforcement in spring of 2022.

A recent meeting with the EPD indicates their review process could take longer than April, said David King, project manager of Barge Design Solutions, which is working with the authority in the stormwater transition from county to the authority.

The authority assumed responsibility for the system in January but won’t be billing residents and businesses until next year.

To meet regulations and requirements, Macon-Bibb County might have to apply for the five-year permit with the understanding the Macon Water Authority will take over once the paperwork is approved.

King believes the authority completed the necessary work and preparation to meet state standards for the permit.

Howell is very familiar with his community’s stormwater plight and campaigned for county commission on a pledge to address drainage issues.

He lobbied to be one of Mayor Lester Miller’s appointees on the authority.

“A lot of times people put their life savings in buying a house and if they bought it in the wrong place, they’re stuck. … I talked to several people who were in tears yesterday about their property and their plight,” said Howell, while riding around with his 4-year-old grandson Thursday morning.

“Pops, that ‘s a lot of water,” little Burton remarked from the car seat at one point in the tour.

With MWA director of Field Operations Michel Wanna on the phone through the truck’s speakers, the two discussed multiple trouble spots that sprung up overnight.

After studying the region since last spring, the authority and Howell plan a town hall meeting in his district to discuss plans to finally address issues Bibb County that were identified decades before.

“Everything is connected,” Howell said. “Sometimes when you have progress here, you take away from it over there.”

He noted Nowell Estates residents say they didn’t have issues until after the widening of Houston Road.

In the meeting, Howell recognized the employees’ dedication that earned the Platinum Award from the Georgia Association of Water Professionals for both the sewer conveyance and water distribution departments. The platinum distinction marks at least five years of scoring at least 95 in an annual peer inspection and review.

This is the first year the water distribution department earned the honors, but the seventh straight year for sewer conveyance.

“It’s a Macon Water Authority award because it takes everyone in this room,” said Darryl Macy, manager of both departments.

With 17 people currently out due to COVID exposure or complications, Macy said staff has been working extremely hard as new hires have been difficult to come by.

When considering the 121 stormwater trouble spots identified mostly outside of Howell’s well-known flooding areas, Howell realized there were not many spots in downtown where miles of lines already have been cleared.

“All the reports we’ve gotten about they’ve cleared out culverts and cleaned out pipes, I would hate to know how many more would be on this list if we had not done that,” Howell said.

“Thank you for having the foresight to get that done or we’d have had a much bigger problem.”

“The promptness when you guys get phone calls and you show up and to hear people get excited when they see them, it gives a good reflection on the Macon Water Authority,” Brown said. “You guys are awesome in my sight.”

Authority chairman Sam Hart echoed the kudos. “I just want you to know you are received extremely well in and outside of this community because you work hard, and so we really appreciate that, and as I say, you make us shine when we talk about the water authority. So, more power to you and keep it up.”