She spent hundreds and worked more to give her son his dream. For nothing.

Demarkeus King thought he was going to play college basketball. When he showed up for move-in day, he found something else waiting for him 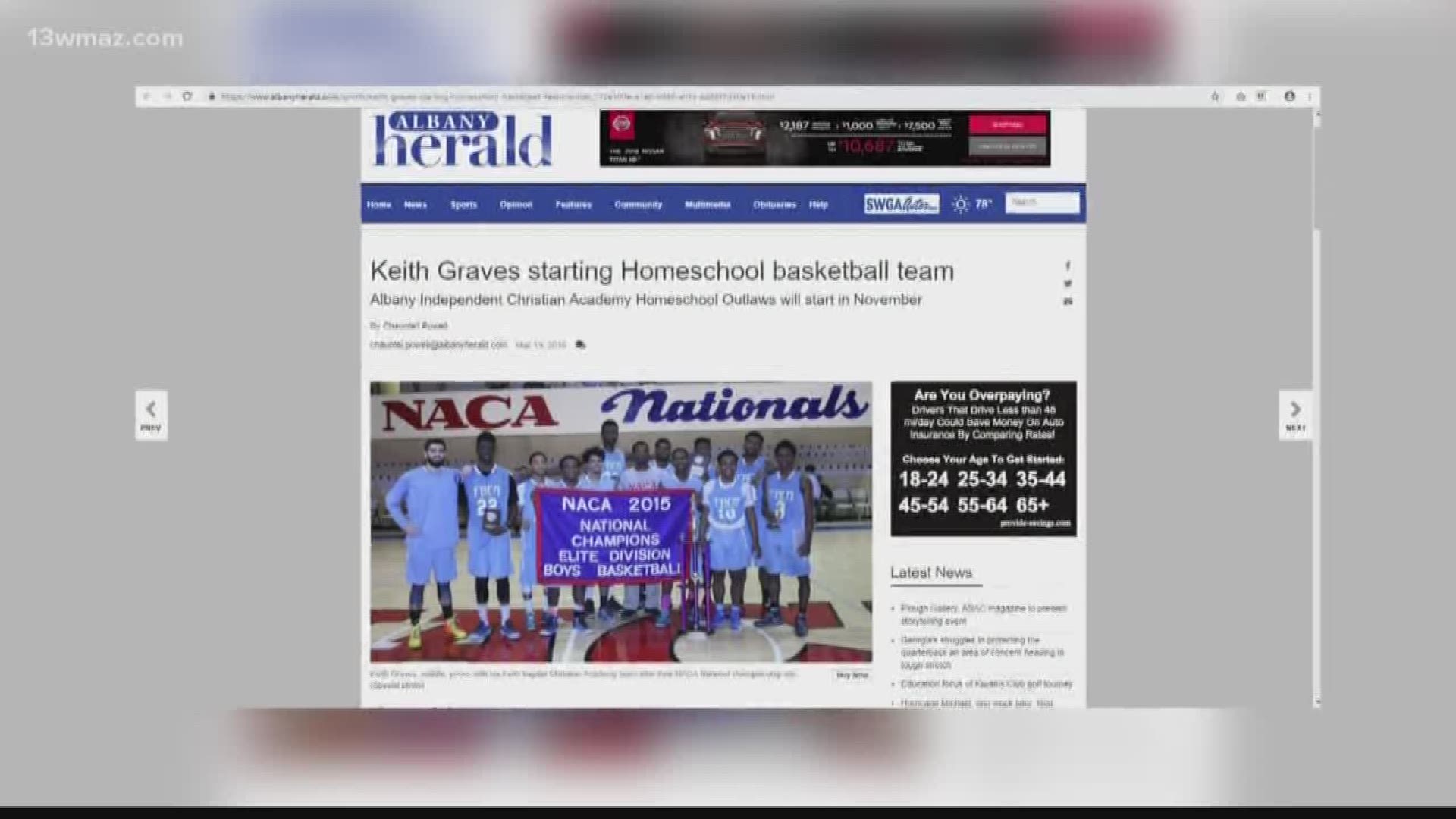 #13INVESTIGATES — Growing up in Telfair County, Georgia, Demarkeus King spent his days on the court, and he started young.

There was a purpose to his practice.

"That would have been the dream...to play in college," said King.

In his senior year at Telfair County High School, his mom says it seemed that opportunity finally came.

"We were under the impression our kids were given scholarships," said Shunda Tucker-Johnson. "We had signings for them."

According to her, a trusted high school coach put her family in touch with a man named Keith Graves, who said he wanted Demarkeus to play for him at South Georgia Christian Academy Prep School.

She says Graves told them tuition was covered, but she needed to pay about $1,600 for housing and a meal plan.

She also says that since Graves first reached out to Demarkeus through a trusted coach, nothing seemed out of place.

So despite never visiting the school, she says she paid up.

She did it, even though she says money is tight for her family.

"Knowing that I had to have this money for him, you know, not only did my family help me but I was working extra trying to, you know, make sure he had what he needed for school," said Tucker-Johnson.

They were dollars she was happy to spend.

"That was my baby, [he was] going to do something that he loves to do," she said.

During the summer, Demarkeus says he played on a travel team led by his presumed new coach, with who he though were his new teammates. They played on several courts, but never South Georgia Christian's.

Still, on August 10, Tucker-Johnson says her family packed up the car and headed for Albany.

They drove to the address Graves gave them for the apartments where Demarkeus would live while at school.

"I'm getting out of McRae, just happy to leave and do something that I love to do," said Demarkeus.

"Nice apartments that were supposed to have two sparkling pools, a tennis court, a workout gym, that we had already paid all the money for," said Tucker-Johnson.

But when they got to the address, Demarkeus says they didn't find apartments.

But more than that, no school.

No academic program, no building, no scholarships -- police confirmed it all.

We asked Dougherty County Sheriff's Office Lt. Milton Thomas: When parents actually show up to drop their kid off, what are they finding?

"Nothing," Thomas responded. "He actually had them set up in a drug-infested area."

And others might have had a similar experience. Sabrina Smith is a Valdosta police sergeant who says she was supposed to move her son in to the same South Georgia Prep apartment.

But she says Graves told her the school was a post-graduate program, not a college. He didn't offer Smith's son a scholarship either.

Still, she says she lost money and her son lost hope.

"To have all of that wiped away, the same person who gave you hope took that hope away," said Smith. "As a mother, there's nothing more personal."

Lt. Thomas says there could be others.

And he says his office is investigating someone for it.

Police have not sought any charges, but say their investigation into Graves has a focus.

Police say they have not been able to reach Graves but 13WMAZ did, through Facebook. We asked him about the parents' allegations.

He said he only ever told parents South Georgia Prep was a summer basketball program, never a school.

Graves says he didn't ask parents to drop their kids off in Albany on August 10 because he wasn't in the country at the time.

He said he'd been coaching in Scotland since August 4.

We asked Lt. Thomas what he made of that. His response was clear.

Thomas says that since he hasn't been able to contact Graves yet, he is asking anyone with information about where he might be to come forward.

Shunda Tucker-Johnson says she's had similar luck. Even though she asked Graves for a refund in August, she's not holding her breath.

But she's speaking out anyway, because her dream now is to make sure no one else goes through what she says her family did.

"I don't want to see another family hurt, another child hurt," she said. "Another given a promise that'll never come true."

Lt. Thomas says the Dougherty Sheriff's Office isn't sure where Graves currently is, but think he might be in Central Georgia.