'It's not racial' | SFA officials say 'swatting' incident involved group of girls, could lead to charges

The school’s police chief also says officers did not storm the room with guns out like it was the “wild west,” despite some rumors on social media. 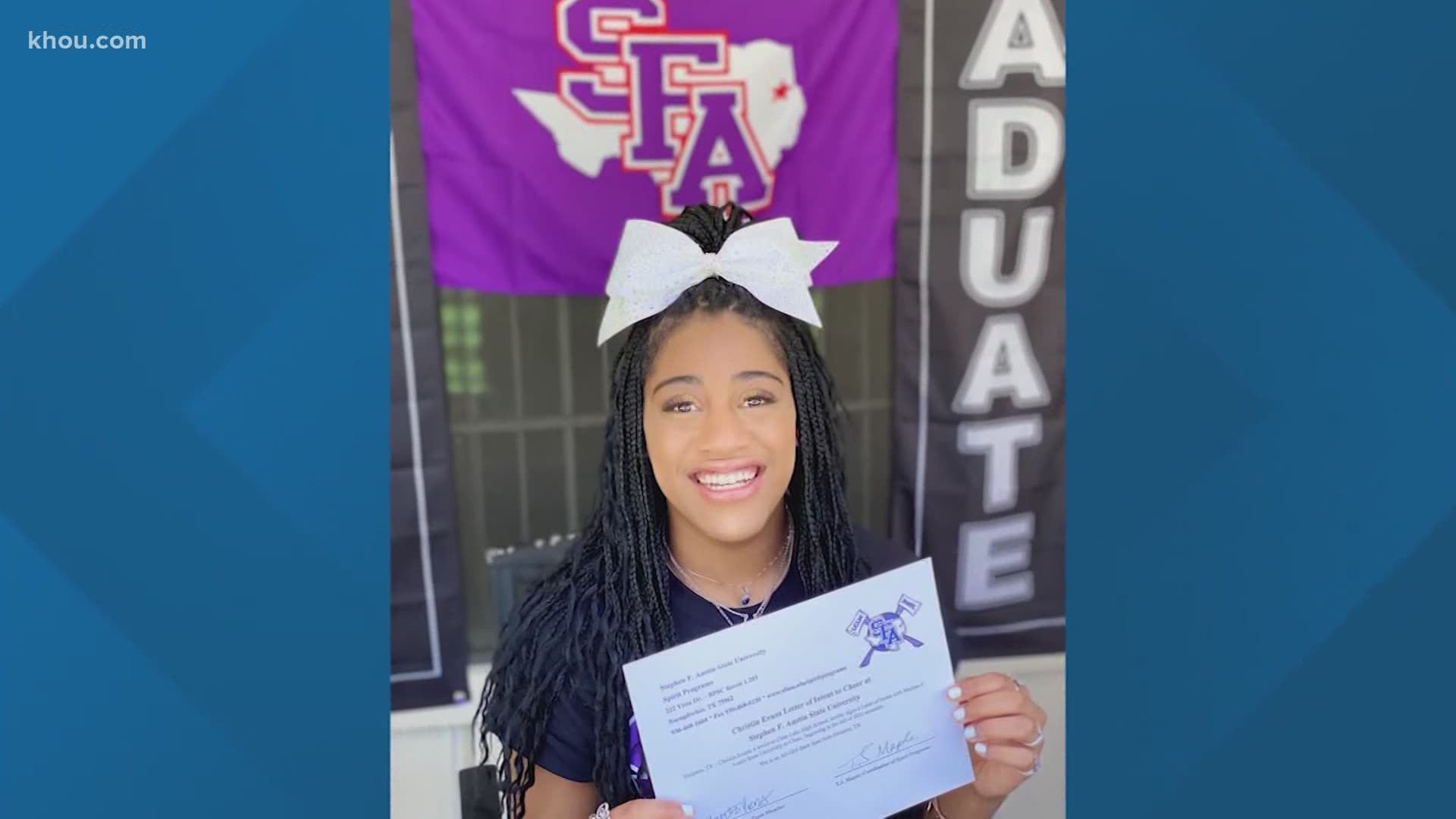 HOUSTON — Stephen F. Austin State University leaders said Wednesday a false police report that sent officers into a student’s dorm as she slept was not racially motivated but could lead to criminal charges.

The incident continues to be investigated and will be referred to the district attorney’s office, the school's police chief said. The school's president also said it is being investigated as a "student rights" case.

The victim, a Black freshman from Houston, said police entered her room on Sept. 14 while she was sleeping with weapons drawn in what now appears to be a “swatting” incident. Christin Evans was ultimately cleared of any wrongdoing and has moved out of the dorms, but she told news outlets now it's really hard for her to be back on campus for classes.

“My heart goes out to the innocent young lady, the victim, in this case,” said SFA President Dr. Scott Gordon at a press conference Wednesday morning. “This is a case of false reporting. She has our full support. Her family has our full support, and we will work closely with them so she can continue on her pathway to success.”

PREVIOUS COVERAGE: SFA student wakes up to police in her dorm after false report filed

“Those who were involved will be held accountable,” he added.

Dr. Scott said the incident involved nearly a dozen “young ladies” with a “core group” of about six.

He described it as a “complex dynamic” that is still under investigation from a variety of angles.

SFA Police Chief John Fields said Wednesday his department is taking it very seriously, as they do every incident reported at the university.

Chief Fields said some have perceived the events as racially motived, but “I can assure you it’s not racial, it’s far from that.”

“The investigation evidence has identified the core group that Dr. Gordon mentioned, three black females and three white caucasian females. All students appear to be willing associates up until that incident.”

Chief Fields said it was not the students who initially called police to the dorm that night, despite some media claims. It was the students’ community assistant who called and initially gave the false report. The call was described as a threat involving a killing, claiming Evans was going to “shank” others with scissors, causing another resident to have a "manic" episode.

Chief Fields said his officers are trained to handle situations such as this, which they understood to be a possible stabbing or even killing.

“They responded within policy of what they are trained to do.”

Officer says he did not intentionally point a gun at Evans

“Officers knocked on the door (Ms. Evans’) four times,” but eventually had to go in through a shared bathroom after being let in by her suitemate.

Chief Fields said only one officer had his weapon un-holstered with a light on it because there were no lights on in the room.

“At no time was he intentionally trying to point at the subject.”

Another officer had his Taser out and a third officer did not have a weapon drawn, the chief said. When they realized Evans was in bed sleeping, the threat was “deescalated.”

Chief Evans said his officers were professional in dealing with Evans, and she was asked to come outside the room to have a conversation, a claim he said is backed up by body cam video. The department has asked for the parents’ permission to release the video.

“Once that is released, everyone will see exactly what happened,” said Chief Fields.

“At no time did we go in like it was the wild, wild west like it’s been presented in the media and some of the other social media posts.”

The university’s leaders said they continue to provide resources to the victim, and the case is being handled as not just a criminal mater but also a “student rights” case.

Chief Fields said the evidence will be handed over to the district attorney’s office where charges would be considered.

Randall Kallinen, the Evans’ family attorney said, “We would like to see the entire call and give it to us first because this is a 17 year old minor sleeping at night.”

Kallinen wants to see the accused students removed from campus while this case is being investigated.

“Most schools that I know would have kicked these kids off campus and then let them have their due process to try to get back in,” Kallinen said.

He said they plan to hold a protest on the university campus on Saturday at noon.

Stephen F. Austin State University is located in Nacogdoches, Texas, about 150 miles northeast of Houston. As of 2018, the university had more than 13,000 students enrolled.

"During the past two days, I have received briefings on the details of the case involving the false reporting incident that occurred on September 14.  As a result of these briefings, I have become very concerned about some irregularities in this case, specifically the amount of time it took for this case to be turned over to the Office of Student Rights and Responsibilities and the fact that I learned of this case from the victim’s mother many days after the incident.

The delay in reporting this case to the Office of Student Rights and Responsibilities was unacceptable and will be addressed.  I will engage an outside, independent investigator to conduct a review of the Division of University Affairs. This will include the policies, procedures, practices and reporting structure within housing, student affairs and student conduct.  Upon completion of this report, I will evaluate all findings and recommendations and make decisions on how we move forward to ensure our future procedures are seamless and timely."   – Dr. Scott Gordon, President