'It's stuff you can't even tell a therapist:' GBI interview footage of Bo Dukes shown at trial 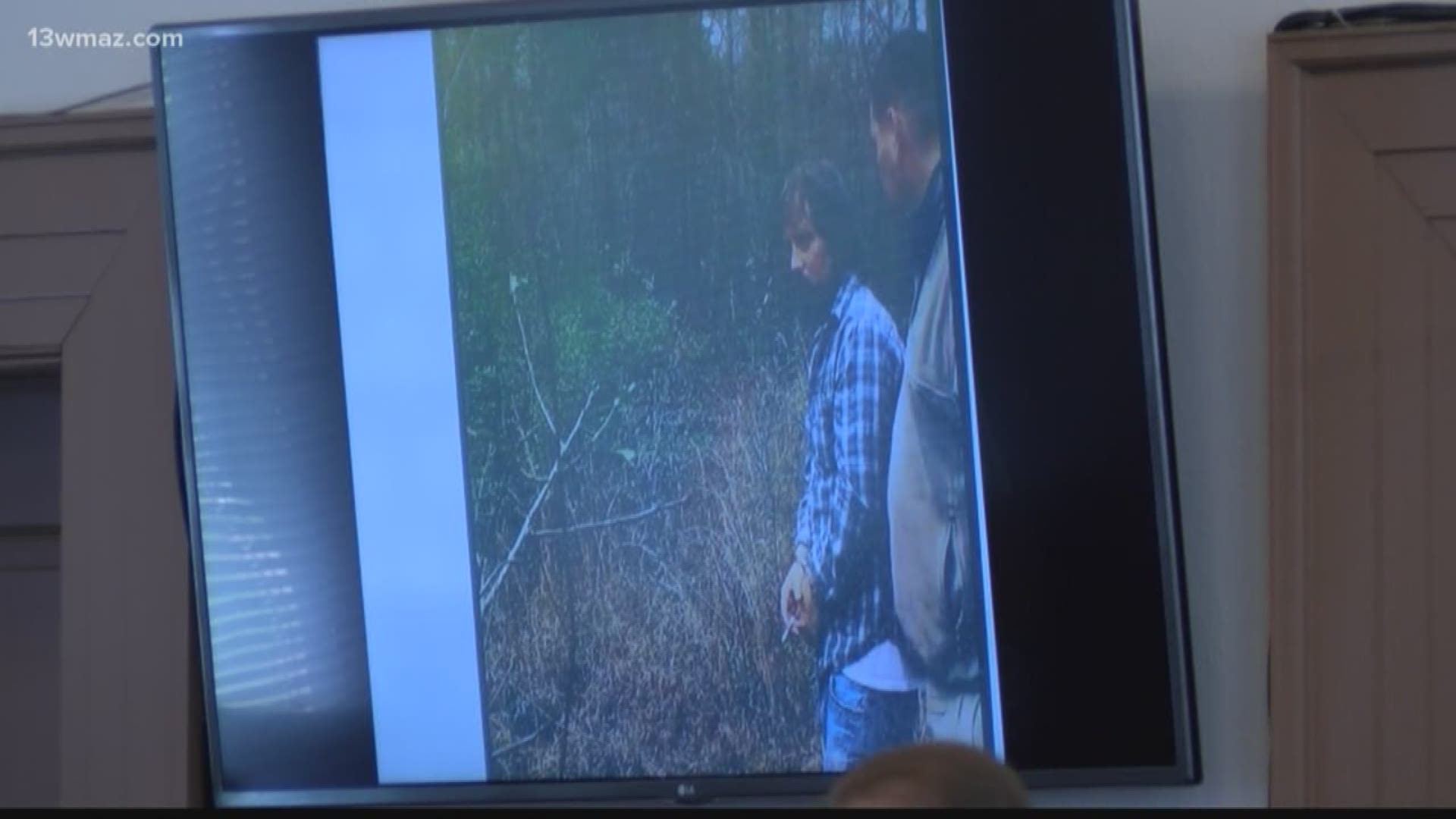 Grinstead is the south Georgia beauty queen and teacher who disappeared from her home in Ocilla in Irwin County back in 2005.

Here's a summary of what happened Wednesday in Wilcox County Superior Court:

Video footage of a GBI interview with Bo back in February 2017 was shown, before Ryan Duke's arrest. Ryan is the man accused of actually killing Grinstead. In the recording, Bo tells GBI Agent Jason Shoudel about the night Grinstead went missing and what happened in the days after. Bo said Ryan told him he killed her and took her body to the Hudson pecan orchard. Bo said he helped Ryan burn her body for two days.

In the recording, Shoudel confronted Bo about why he didn't say all of this in his previous June 2016 interview with him. Bo said it was just a secret he kept for a long time. After the February 2017 interview, Bo took Shoudel to the pecan orchard to point out the general area of the burn site.

District Attorney for the Tifton Judicial Circuit Paul Bowden said Defense Attorney John Fox asked for an agreement of derivative immunity, if Bo was needed to testify in any court proceedings. Bowden said derivative immunity means they cannot use what someone says in a witness testimony in a court proceeding against them, but it does not prevent them from being prosecuted or the outcome if they are charged.

GBI Agent Todd Crosby described the search for Grinstead's remains at the Hudson pecan orchard in February 2017. Forensic anthropologic consultant for the GBI, Dr. Alice Gooding, said fragments of human bones were found at the orchard. Pictures of the fragments were shown, and she said they had been burned.

Jesse Worley, latent fingerprint examiner with the GBI, said she found two latent prints that matched Ryan's on the glove.

Court will be back in session Thursday at 9 a.m. in Wilcox County Superior Court.

Here's a complete breakdown of what happened during the day:

Two forensic biologists were called by the state to testify on the work they did with the GBI on the Grinstead case.

Both Lisa Ellison and Ashley Hinkle tested the glove found in Grinstead's yard back in 2005 for DNA at different times. Ellison tested the glove in 2005 and left the GBI in 2006. She said Grinstead's DNA and a male's DNA were both found on the glove. Hinkle confirmed this in her testimony.

Hinkle also tested the blood found on Grinstead's comforter, but she said you can't determine what kind of blood it is, whether it's from a cut or a nosebleed or menstruation.

Jesse Worley, latent fingerprint examiner with the GBI, was called next to testify and discuss her test results from three latent prints found on the glove. She said two of the impressions matched Ryan, and the third was inconclusive.

The court recessed around 4:30 p.m., because Judge Robert Chasteen, Jr. said the next witness would be 'considerably long' and he didn't want to break it up between two days.

Court will be back in session on Thursday starting at 9 a.m.

GBI Agent Todd Crosby was called to the stand and detailed search efforts that took place at the Hudson pecan orchard on Feb. 27 and 28 in 2017.

He demonstrated how dirt was screened and searched for burned material or human bones to the jury using a short rod. Several pictures were shown to the jury of the search sites in the orchard, roped off in a grid.

Crosby said the search was extensive, and a lot of agents were called out to the site to help. They said they mostly found animal bones, except for one spot. The defense did not ask him any questions.

Dr. Alice Gooding, a forensic anthropologic consultant for the GBI, was called up to the stand to follow up with the results of the search. She said human remains were found at a site excavated on Feb. 28, 2017.

Pictures were shown to the court of hand fragments, skull fragments, fragments from the spine and even a tooth that were found at the site. Gooding explained she could tell the bones were burned because of their bluish, grey color and their weight.

Before stepping off the stand, Defense Attorney Rigby asked Gooding how hot a fire would have to be to burn human remains. She said the threshold would have to be about 1,200 degrees, the same number Bo allegedly told his army buddy, John McCullough. The defense did not ask her any questions.

After lunch, Shoudel returned to the stand for around 30 minutes.

Fox continued to question Shoudel, as to point out differences between two interviews Bo's army buddy, John McCullough, gave to the GBI in 2016 and 2018.

McCullough testified on Tuesday in the trial, and said Bo had told him he'd helped someone burn Grinstead's body in a pecan orchard when they were on Christmas break in Ocilla together in 2006.

Shoudel was finally dismissed around 2 p.m. After him, District Attorney for the Tifton Judicial Circuit, Paul Bowden was called to the stand for a short testimony.

Bowden said neither himself or District Attorney Brad Rigby made deals with Bo for reduced charges or a lighter sentence at a meeting between all parties, including Bo and his defense lawyer, back in February 2017. Bowden said Bo was also not offered immunity for showing them the pecan orchard.

After a short recess, the recording finished up and the prosecution began questioning Shoudel again, moving into the third hour of him on the stand.

After the interview on Feb. 21, 2017, Shoudel said he went with Bo and another agent to the Hudson Pecan Company pecan orchard, to determine where the body could've been burned back in 2005.

Pictures of the visit were released to the jury, showing Bo standing in the general area of the burn site, on the outskirts of the pecan orchard near some pine trees.

In late February 2017 after the meeting with Bo, Shoudel said he went to visit Ryan at his residence on Pleasure Lake Lane and interviewed him at the Ocilla Police Department.

Shoudel said he went to the orchard with Ryan soon after, who was in custody at the time and in handcuffs. He said Ryan pointed out the same general area of the orchard Bo pointed before as the location where they burned the body.

Defense Attorney John Fox began to cross-examine Shoudel, asking how investigative summaries are done and entered into the case file. Further along in the questioning, Shoudel revealed Bo's DNA taken during the June 2016 interview didn't match anything on file.

The court recessed for lunch and expects to be back in session around 1:30 p.m.

The prosecution started questioning GBI Agent Shoudel, and wasted no time getting into another recorded interview--this time, a video recording.

The interview took place at the Rochelle Police Department on Feb. 21, 2017, and showed Dukes and Shoudel talking nearly a year after their other recorded interview in June 2016, where Dukes denied speaking about burning a body to army buddy John McCullough.

This was just before Ryan Duke's arrest for allegedly killing Grinstead.

MORE: A Break in the Case: Arrest made in death, disappearance of Tara Grinstead

In the recording, Bo recapped what exactly happened with Ryan the weekend Grinstead went missing in October 2005:

Bo said that Saturday night, there was a party at his trailer in Fitzgerald. He said he drank, passed out and was woken up the next morning by Ryan.

According to Bo, Ryan confessed that he broke into Grinstead's home using a credit card, got in bed with her and strangled her to death. He said Ryan told him he'd then used Bo's white Ford F-150 to move her body to the pecan orchard, and stopped at a laundromat dumpster to throw away her keys on the way.

In the next day or few days, Bo said he told Ryan's brother, Stephen, what Ryan had told him. Bo said he then traveled to the pecan orchard with Ryan, where Ryan showed him Grinstead's 'unclothed' and 'discolored' body.

"He'd only been [to the orchard] a few times, I was surprised he found the place," Dukes said, in the recording.

Bo said he saw marks on her neck, and together, they burned her body for two days.

"It's stuff you can't even tell a therapist," Bo said, in the recording. "You want to talk to somebody, and you can't tell them."

But Bo said to Shoudel in the recording he'd told multiple people over the years, including his ex-girlfriend Brooke Sheridan, his ex-wife and multiple friends and family members.

In the recording, Shoudel confronts Bo about their previous interview on June 16, 2016. Shoudel asked Bo point-blank why he didn't tell him what happened then. Bo said he was just keeping the secret for a long time.

Shoudel mentioned the glove found in Grinstead's front yard the morning after, but Bo said Ryan told him he didn't use gloves. He also said Ryan never told him why he killed Grinstead.

Shoudel asked Bo if he would help with the investigation and try to get Ryan to say something through Facebook messenger.

"I think he knows something's up," Bo said, in the recording. He reluctantly agreed to help.

After a slew of testimonies from witnesses called by the prosecution on Tuesday, the third day of trial proceedings started on Wednesday in Wilcox County Superior Court for Bo Dukes.

Dukes is the man accused of concealing Tara Grinstead's death back in 2005. Grinstead is the south Georgia beauty queen and teacher who disappeared from her home in Ocilla in Irwin County that year.

The court picked up where they left off with GBI Agent Jason Shoudel Wednesday morning starting at 9 a.m.