Paws to Care volunteers say, during the last year, their calls for visits have nearly tripled. 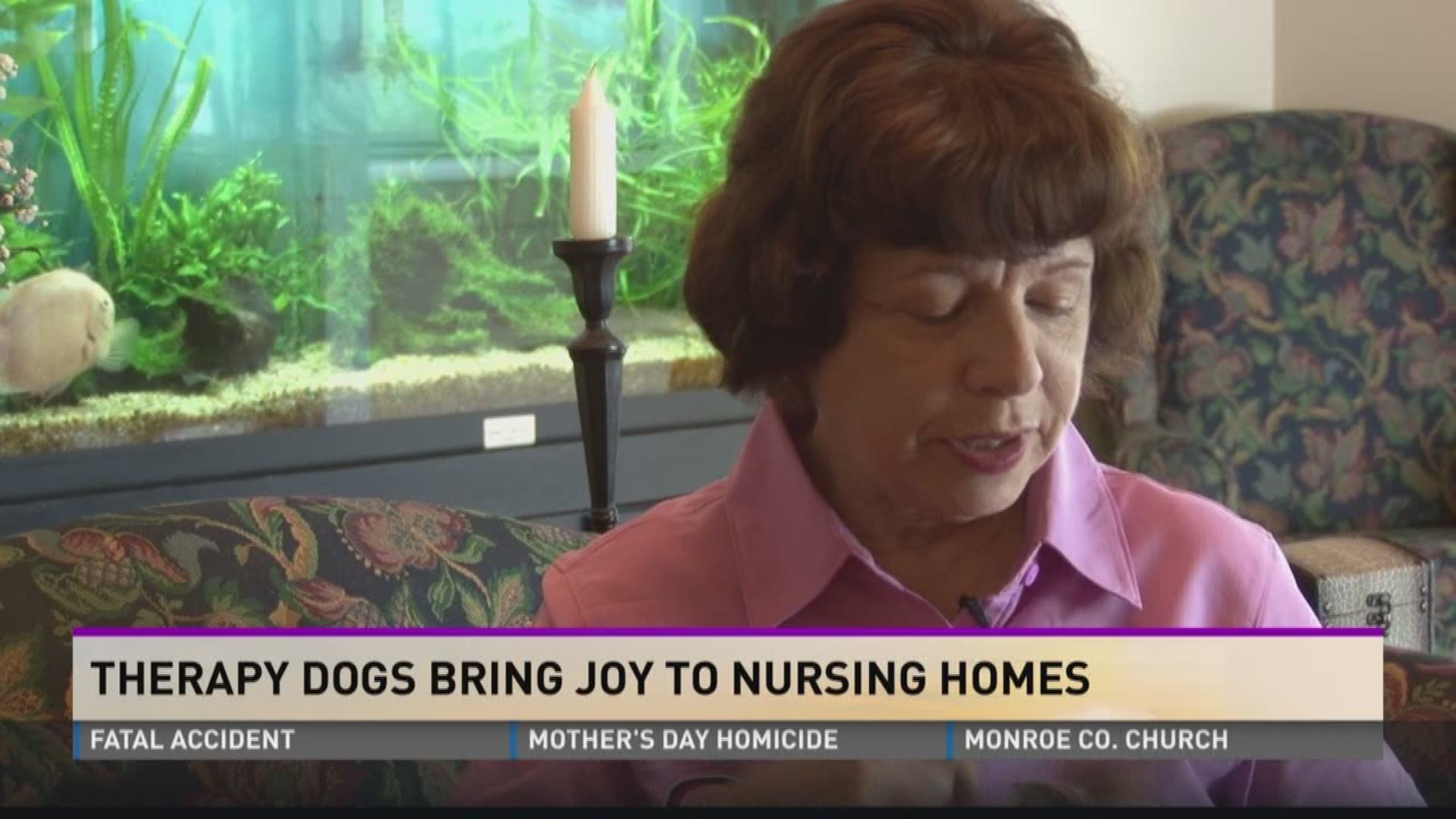 It is safe to say many people enjoy the company of a dog.

Now, many groups are harnessing that feel-good potential to do good in people's lives.

The group Paws to Care in Monroe County went from training dogs, to using those dogs for therapy.

Volunteers say during the last year, their calls for visits have nearly tripled.

Each week at Bolingreen Health and Rehabilitation, the people who live here get some special visitors.

“I've loved dogs all my life,” said Martha Jenkins. She sneaks a treat to a dog with his head rested on her lap.

She, along with many of the other residents, look forward to the days when Paws to Care brings their crew.

“If they didn't come on Sunday, I don't know what I'd do,” said Jenkins. “I wish they'd come every day.”

The room is filled with every type of dog, from a Yorkshire Terrier to a Doberman. Some are performing tricks to the applause of the residents. Others, however, are snuggled up in their arms for a more quiet moment.

“It's my way of giving back to the community," said founder of the group, Chan Johnson. “It's just priceless.”

Johnson totes around a Chihuahua named Bruno, with a tiny vest that displays his therapy dog status.

Johnson was originally a dog trainer, but she eventually became fascinated with research about using dogs for therapeutic purposes. She became, what's called, a tester and observer. She helps dogs get certified for visits.

Recently, their requests for therapy dog visits have increased dramatically.

“I would say, in the last six months to a year, it's probably tripled,” Johnson said. “People are becoming more aware of the benefits.”

Darcy Sun incorporates studies like this into her class. She's a volunteer with Paws to Care, as well as a professor of Health Services at Middle Georgia State University.

“Sometimes we'll notice people are not very responsive, so we put the dog on them and let them touch the dog, and they wake up,” Sun said.

“She seems to sense when people are uncomfortable, when people are lonely, have needs or wants,” said Paws to Care member Michele Dreisbach, petting her dog Indy. “She responds to that in a way that I can't.”

Dreisbach says they also visit hospitals, camps, children on the Autism spectrum, and schools, adding the extra time she spends training her dog is well worth it.

“Sometimes we're the only visitors they get.”

All of the Paws to Care dogs are certified with the Alliance of Therapy Dogs. To receive certification, it takes an initial test, three observed visits, and then paperwork.

Administrator of Bolingreen, Michael Barry, says they originally brought in the therapy dogs as a sort of experiment to see how people responded. Now, he says they are a vital part of their health services.

“Medicine, physical therapy, that ain't going to beat having a pet love on you and lick on you and make your day,” Barry says.

He says there has been a movement away from the traditional idea that hospitals have to be strictly clinical.

“It makes it more home like. This is their home, and the dog adds that flavor to it.”

All of the participants say the dogs provide good company and give them something medicine can’t —unconditional love.

Dolly Bradford sits with a pup donning a “free kisses” bandana perched on her lap.

“They love everybody,” she says with a smile. “I just don’t want to turn them loose!”

To find out more about how to get your pet certified, visit www.therapydogs.com