On Tuesday, Coliseum Medical Centers had 14 COVID-19 patients. The last time their number was that low was back in June. 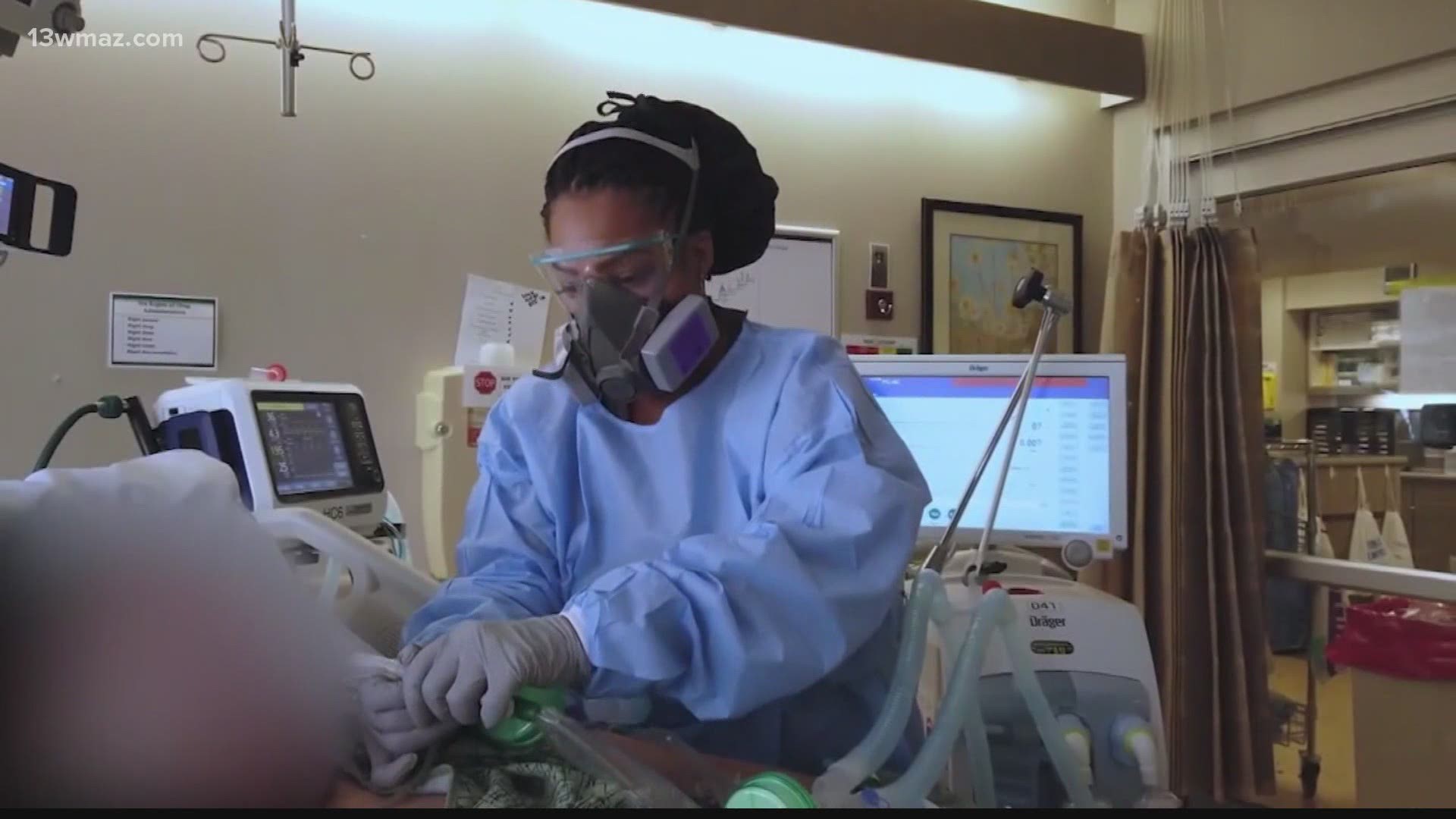 WARNER ROBINS, Ga. — After a year of overflowing ICUs and hospital diversions, hospitals are getting a break.

"More people have died in this hospital in the last year than in my previous 13 years of working here," says Fairview Park Hospital CEO Don Avery.

Some medical professionals have called it "a war zone."

"For those employees, it's really like being in battle with people alongside you, seeing them die daily," says Avery.

Back in January, Coliseum Medical Centers was caring for around 90 patients.

"I think at that point, I would have been happy to get down to 50. It just felt so overwhelming," says Dr. Jennifer Hoffman, but, at least for today, our Central Georgia hospitals are getting some relief.

On Tuesday, Coliseum had 14 COVID-19 patients, a number they haven't seen since last June.

"Everyone is really excited and we're hoping those most recent surge is the last one, but you know, time will tell," says Hoffman.

Just two months ago, Houston Medical Center was full with close to 140 patients.

"It's nice. It really is nice," says Chief Medical Officer Dr. Dan Stewart. "As we go along further and vaccinate more and more of the population, I think we're gonna have good enough herd immunity that any wave we see is probably going to be blunted."

Tuesday marked one year since Fairview Park Hospital admitted their first patient with the virus.

"I can remember getting that phone call and I was almost surprised because for some reason, I had in my mind that COVID was a big city issue or a west coast issue or an international issue, but it wasn't going to get to middle Georgia."

Back in January, they were dealing with their highest number of patients yet at 68.

"Certainly, if I'd sat and thought critically about it, I would have said 'Well, certainly this is going to end' or 'Certainly, it's going to diminish significantly.' But, I will tell you, when you're in the middle of it, it feels like there is no end in sight."

Tuesday, they were down to just one patient.

"Even if we just have one patient, to that patient and to that family, it's a big deal and it's still everything to them," says Avery.

To date, Fairview Park has had 940 COVID-19 patients total, with 122 deaths at the hospital.

Coliseum has had 210 COVID-19 related deaths since the start of the pandemic.

On Wednesday, they had 37 patients across their entire system.

Hoffman says she is worried we could see another wave with spring break coming up, but it's hard to tell.

She also says there are still so many unknowns about the new variants, and Stewart agrees.

"They are anticipating another wave. I think most of it driven by some of the variants and again, that's an unknown. We don't know exactly what the variants will do," he says. "Will the vaccine provide adequate protection? Certainly, hopefully, it will, or we will be right back in the soup again and have people who think they're protected get sick."

All three agree, vaccinating those most at risk has helped drop their numbers.

Avery says this past year has been unlike anything they've ever seen.

"I think hospitals across the country have really learned what resilience means," Avery says.

Stewart says this pandemic is something that flipped everything on its head.

"It's almost been like 9/11," he says. "In many regards in the medical field, it's been kind of like that. It wasn't anything we expected, but we had to respond."

Hoffman is seeing her mother for the first time in a year this week. Both of them are now fully vaccinated and, according to the CDC, can now safely be around each other.

"It's been my greatest professional challenge of my entire life," she says. "There's been an awful lot of suffering and an awful lot of death, some of which felt avoidable to me," but they each say it feels like the worst is finally behind us.

"To see those numbers decline, they're declining everywhere, which does give us hope that there is a time in the hopefully not-too-distant future that we will be beyond this pandemic," says Avery.