Despite feeling colder than normal, this year's winter has been close to average 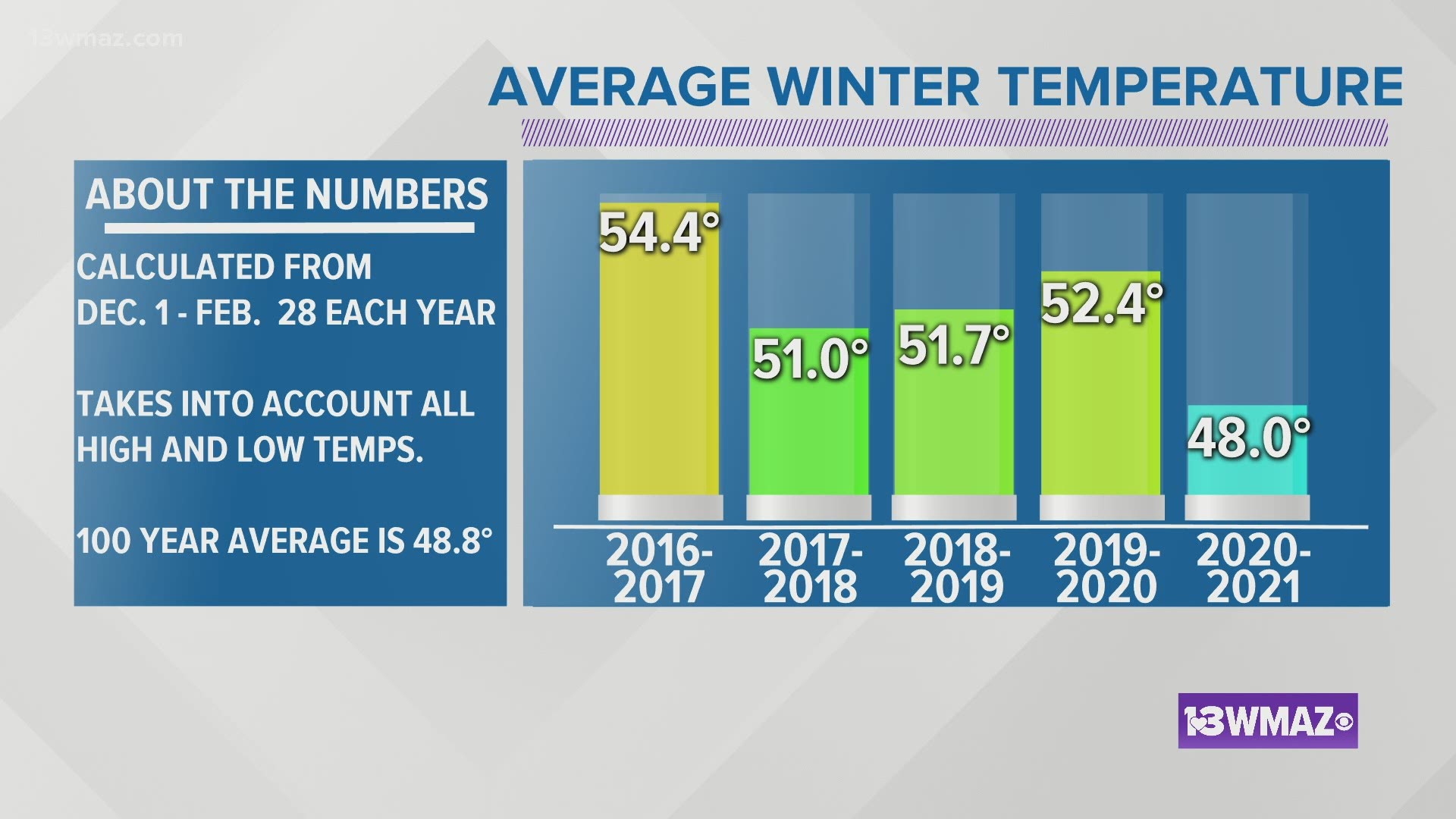 MACON, Ga. — This winter has felt different from the past few winters. We've had our fair share of 20 degree lows and afternoons in the 40s, so you may be thinking that this winter has been colder than normal.

We wanted to see how this winter stacks up to the average of the last 100 winters, and what we found was interesting. Despite feeling colder, this year's winter is very close to what a "normal" winter should be like as far as temperatures go. Rainfall is running slightly below average. Let's dive into the numbers.

We calculated the 100-year average winter temperature in Macon to be 48.8 degrees Fahrenheit. This takes into account every high and low temperature each December through February for the last 100 years.

So far, this winter's average temperature is 48.0 degrees. That's very close to, but slightly below the 100-year moving average of 48.8 degrees.

Why does this winter feel so different? Look at the previous four winters! Our weather in Central Georgia has essentially been running a fever during the winter time.

Each winter for the past several years has been two to six degrees warmer than normal.

While that might not sound like much, two to six degrees is very noticeable. In the morning, that means not as many frosty days where we have to scrape frost off our windshields.

In the afternoons, it means we've been able to take off our jackets and break out the shorts every once in a while. This winter, we simply haven't been able to do that and you've likely noticed. Even though this is a "normal" winter temperature-wise, it is noticeably different from recent years.

We ran similar calculations for precipitation. If you add up each December, January, and February rainfall total for the last 100 years, you'd find that Macon's average winter precipitation is 12.94 inches.

This winter's total precipitation comes out to 10.18 inches. With no major rain chances in our forecast coming up, there is a good chance this finishes a little below the average.

The bottom line? This year's winter is pretty close to what you'd expect for Central Georgia compared to the 100-year running temperature and rainfall averages.

The total rainfall for this winter stands at 10.18 inches, and may come in a little under the 100-year average of 12.94 inches per winter.

The big difference is this winter has been cooler than our very warm last few winters.