'We’d do what we had to do' Local Tuskegee Airman recalls his service, changes in America since WWII 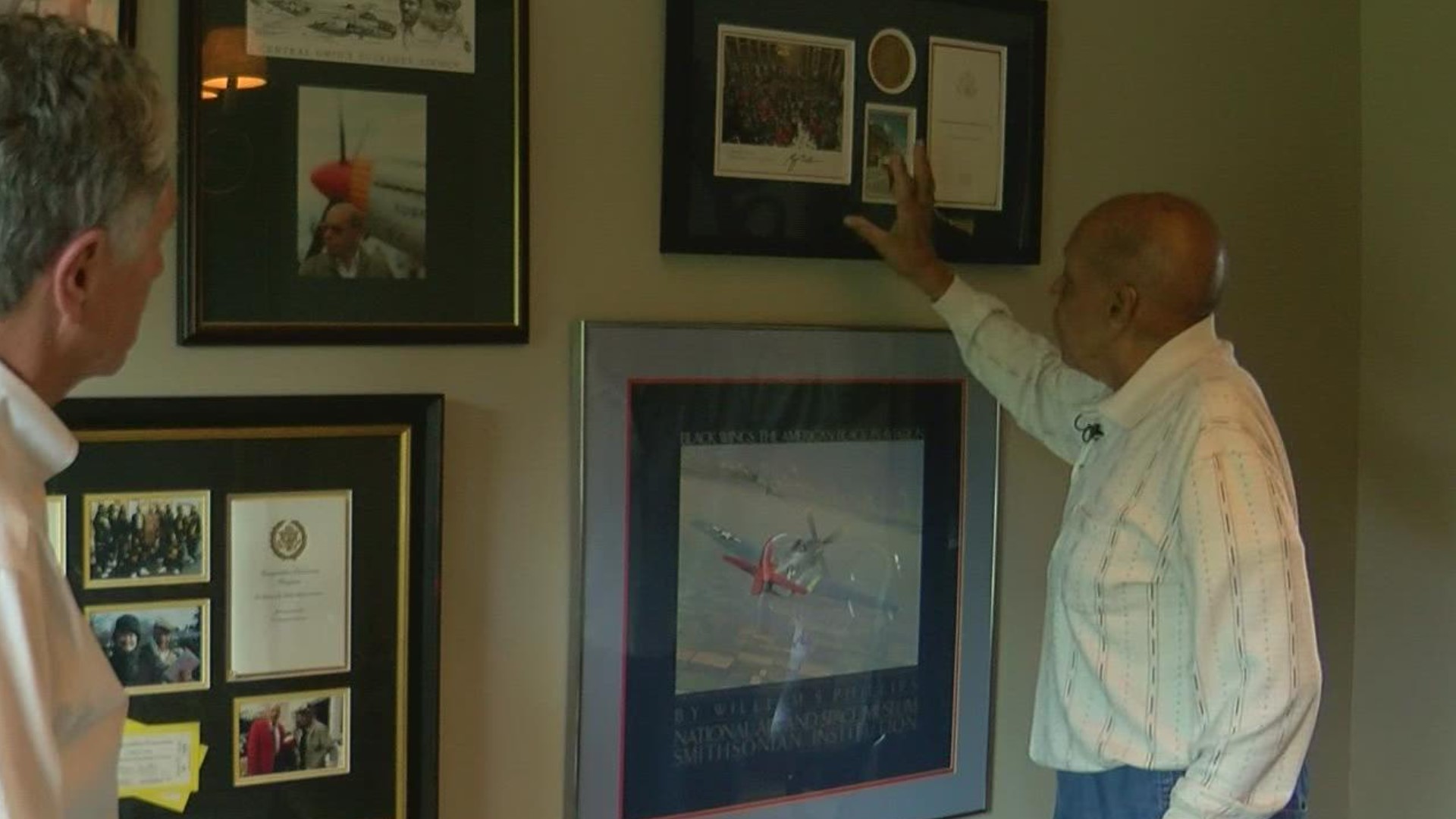 PORT CLINTON, Ohio — On this Veterans Day, there are fewer and fewer remaining heroes from World War II. Just about 200,000 remain out of the 16 million Americans who served.

We take the day to honor and thank a former Tuskegee Airman who is living in Ottawa County.

The Tuskegee Airmen are legendary now as the famed Red Tails. These are Black Americans who fought racism and prejudice to break down barriers, become fighter pilots, and help win the war in Europe.

Their story wasn’t widely known until 1995 when books - then movies - came out to tell the great story.

Harold Brown is 97 years old, in great health with a sharp memory. He flew 30 missions in 1944 and 1945 for the 332nd fighter group based in Italy. They had one priority: protect American bombers raiding German factories and bases, preventing an attack from Nazi planes.

Credit: WTOL 11
Harold Brown, one of the original Tuskegee Airmen, shares his personal war stories with students at the Liberty Aviation Museum in Port Clinton.

The Red Tail pilots were all trained at Tuskegee Air Field in Alabama. Harold had joined the Army after high school graduation in Minneapolis in 1942. One of the best in his class, he fulfilled a dream to fly airplanes and serve his country. His first mission was June 6, 1944.

The P-51 Mustangs were the very best, once they actually got in the air. The scariest part of a mission he says? Take-off.

“I don’t care how many missions you had, that was the one thing you were a little anxious (about). 'Is this engine going to work as good as advertised?' If it does, then you’ve done the hardest thing to do for the mission, and that was to get airborne,” Brown said.

Credit: Associated Press
Harold Brown of Port Clinton, Ohio, was a Tuskegee Airman in World War II, flew 30 missions in 1944 and 1945 for the 332nd fighter group based in Italy.

On his 30th mission, Harold’s plane was hit by shrapnel from a train he was attacking. His plane went down in Germany. He spent the final two months of the war in a POW camp till V-E Day.

When he returned home with other Black veterans, the America he fought for was still racist and segregated. But after spending 23 years in the Air Force, retiring as a lieutenant colonel, then having a career in education, Harold sees a different American now.

Here, quoting one of his fellow Red Tail pilots, Herald recalls, “He said, 'there was no doubt in my mind that I knew this country had the capacity to make change. It was going to take time and I would have to be patient, but it will happen,' and that was pretty much the thinking of all of us. You know we had jobs to do. We were on the military, you know. We’d do what we had to do. All of us advanced and did well.”

Credit: Associated Press
Harold Brown of Port Clinton, Ohio, was a Tuskegee Airman in World War II, flew 30 missions in 1944 and 1945 for the 332nd fighter group based in Italy.

Over the years, the Tuskegee Airmen have gotten recognition, getting a Congressional Gold Medal in 2007. Harold was inducted into the Minnesota Aviation Hall of Fame and is featured in a PBS documentary. He wrote a book with his wife called “Keep Your Tailspeed Up: The Story of the Tuskegee Airmen."

He’s one of eight remaining Red Tail pilots still alive, and today and every day, we thank and salute him.