SANDERSVILLE, Ga. — If you're trying to get to know a community, a stop at the county courthouse is probably a good place to start. Without even going inside, the often ornate buildings tell you something about the history and the people who live there.

Every Friday this month, Suzanne Lawler takes you into the hallowed halls of four Central Georgia courthouses. For our second week, we're headed to Sandersville.

RELATED: 'When you walk in here, you're walking back in time:' Monroe County Courthouse sees 123 years of trials

The clock tower is a mainstay of the Washington County Courthouse, which was built in 1869. The town has parts ordered, so the bell will ring just like it did 150 years ago.

But it's not the first courthouse in the city to burn to the ground.

The Washington County Courthouse sits prominently on the town square in Sandersville.

"It's the tallest building or structure that we have around, so everyone can see it," said County Administrator Dustin Peebles.

He loves that there's a spot on the courthouse grounds that's preserved from the past.

"It's a neat little feature, and people seem to look over it, and I can tell you as well, I've not seen one anywhere else," Peebles said.

It's a horseshoe-shaped piece of concrete. It had a purpose back in the days of the horse and buggy.

"Kind of an assistance for ladies that would've been coming into town to come to the courthouse to get off of their stagecoaches or wagons or horses at that time," Peebles said.

Those were much different times, and this high Victorian, eclectic-styled building was vital in more ways than one.

"A lot of people didn't have any watches or clocks in the house, but when they hear the clock go off from the courthouse, they knew what time it was," County Commissioner Frank Simmons, Jr. said.

Not only did folks some decades ago depend on the clock, they used it for other necessities.

"This is a place you liked to go, and you'd go in there and use the bathroom, because we didn't have a bathroom at our house, and sometimes we'd just come to town to use the bathroom," Simmons said.

The townspeople of Sandersville are resilient -- they've built three brick courthouses, two of which burned to the ground.

The first fire happened in 1855, and it was so big that only five structures in the town survived. The next fire came nine years later in 1864, thanks to General William Sherman and his March to Sea.

"General Sherman of the Federal Forces invaded the town of Sandersville and occupied the town for about two to three days," Daniel said.

Daniel and his fellow re-enactors battled in front of the courthouse to mark the 155th anniversary of Sherman's occupation here.

"The Confederates had used the courthouse here as what he called a fort. They had fired on him from the courthouse, so that gave him permission to burn what was a military facility is what he said, so he burnt the courthouse and a couple of other buildings in town," Daniel explained.

After that devastating blow, the town built what you see today.

"Looking right here at the trusses, these would have been installed in 1869 when they rebuilt the courthouse after Sherman burnt it," Peebles said.

With that kind of history, you can see why the courthouse sits on the Civil War Heritage Trail and landed on the National Register of Historic Places in 1980.

"It's been here, and it will always be here as far as we're concerned," Peebles said.

The sheriff's office used to sit in the courthouse, and the sheriff lived in the jail right behind the building. Today it houses the Historical Society, but the jail is still there. 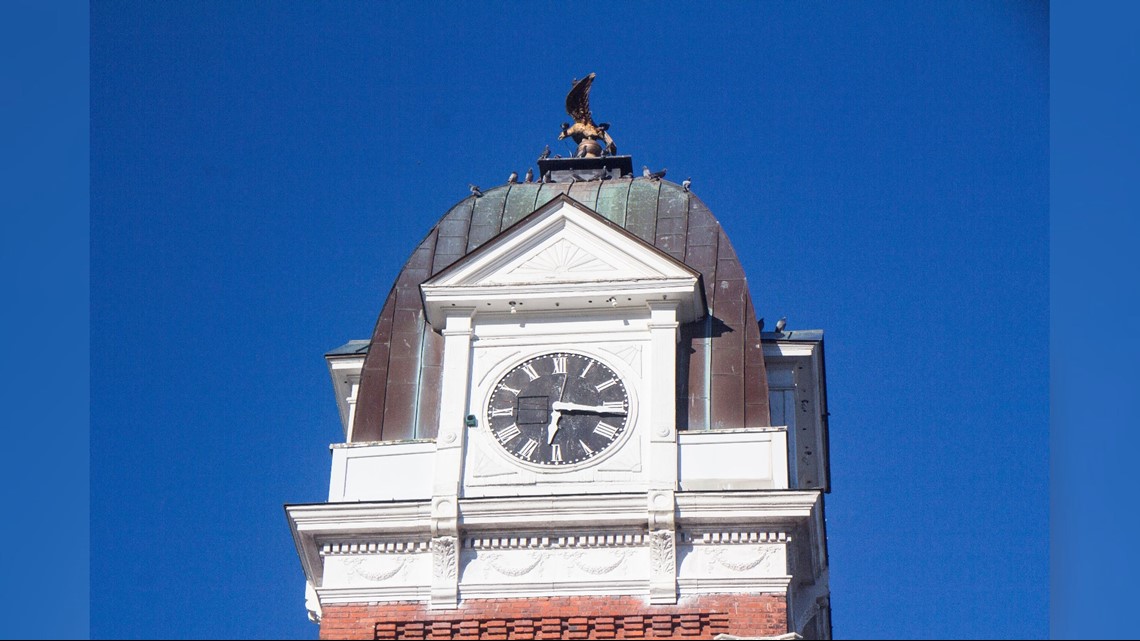 Join us next week, Friday, November 8, to find out which Central Georgia courthouse we feature next.

MORE NEWS OUT OF WASHINGTON COUNTY