'You just miss him so terribly': Coliseum remembers 1 year of COVID-19 survivors and victims

Between their two hospitals, they've had 1,391 COVID-19 patients in the last year and 225 deaths 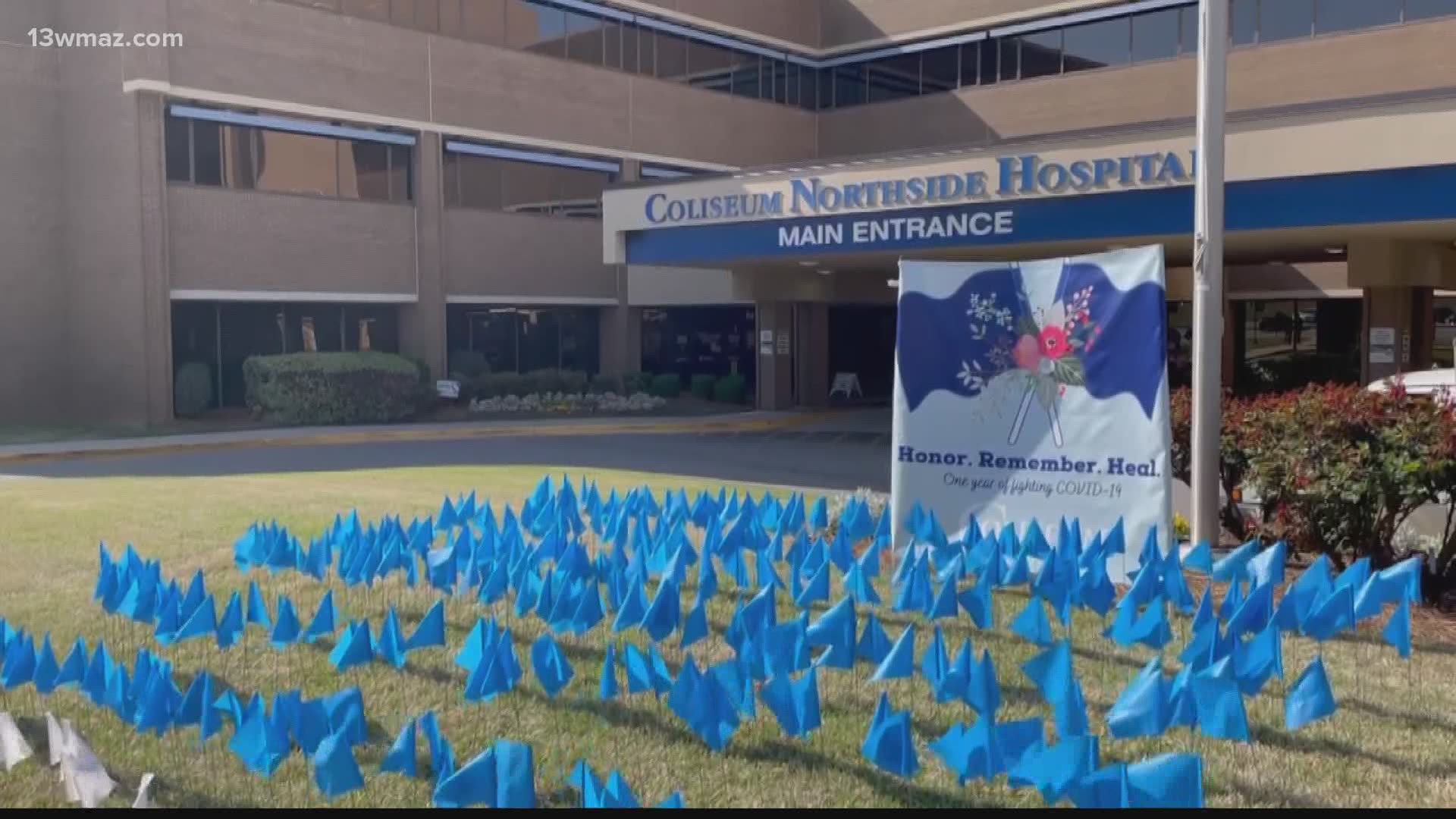 On Wednesday, there were 1,075 flags on the Coliseum Medical Centers lawn and 316 at Coliseum Northside Hospital. The blue represent the ones who fought the virus at the hospital and survived. The white ones remember the ones who died from the virus.

People like Shelly Berryhill, a Hawkinsville City Councilman, make up the 863 blue flags at CMC.

A year ago Wednesday, he was Pulaski County's first COVID-19 case.

"I had COVID-19, a condition that, at that time, no one really knew how to treat," he says. "I was just talking to some of the nurses and apparently, I fought them hard the whole time."

He says he wouldn't be standing here today after being in the hospital for a month if it weren't for the doctors and nurses who took care of him.

"Thank you for battling the unknown on our behalf. We stand before you today because of you."

But for the Ramey family, they weren't so lucky.

They lost Glenn, a husband, a father, and a grandfather, in January.

Glenn and his son Mathew got sick at the same time around Thanksgiving.

"He'd turn over Heaven and Earth for his family," says Mathew.

Glenn is represented in one of the 212 white flags on Coliseum's lawn.

His wife, Kathy, says while he was still awake, they were able to text and FaceTime to keep in touch.

"He just said he wanted... what he was going through, he wanted to bring glory to God through it," says Kathy. "Most of the time we're OK. There are triggers. A friend of mine the other day said, 'It may happen in the potato chip aisle at the grocery store.' You never know when you're gonna have that trigger and there's gonna be that memory or where you just miss him so terribly."

Glenn's daughter Ashley Lipson says she and her son, Maddox, miss him every day.

"He was the best dad," she says. "Such a giver for us or for anybody who needed it and such a teacher."

Mathew says there are some days where they remember the good times, but just three months after his death, it's still hard.

"It's just all the little firsts of things that we do without him are what hit pretty hard."

CEO Stephen Daugherty says this past year was a life-altering experience for not only their patients, but for the community and his staff.

"They were, at a time of uncertainty and danger, were the firemen of healthcare. Human nature says run away from that. Our healthcare team ran towards it."

That's exactly what Catherine Whidby, Julia Rodgers, and Trish Dasher did in the ICU.

Whidby says she came into the ICU right at their peak and it was unlike anything she could have imagined.

"I think if you would have told us a year ago what we would've gone through this year, no one would have believed you," she says. "I think it has changed the way that we look at nursing all together."

Rodgers says this has been one of the hardest years of her life.

"Most of the ones that have passed, at least one of us ICU nurses were in the room with them holding their hand while they passed away and that's what brings tears to my eyes the most, is remembering everybody I've went in the room and held hands with or had to call the family and let them know they didn't make it," she says. "It's something I will never forget and I hope nobody else has to live through this and I don't wish this on anyone.

At their peak, Coliseum was caring for close to 100 patients.

Now, they only have seven.

"We actually have time to take our gowns off, wash our hands and do whatever we need to do outside of the room and then come back if we need to. It's a weight lifted off your shoulders," she says.

She says now, instead of looking at her fellow nurses with tears in her eyes from exhaustion and heartache, they can look at each other and crack a smile and take a second to check on each other.

Dasher says folks like Berryhill are what got them through their lowest points.

"It is very emotional. I do feel like the emotions are up and down from seeing Mr. Berryhill, one of our first patients that we all took care of, seeing his recovery has been amazing," she says. "We've also seen so many patients that have died without their families there and it's just been really hard."

More than anything, the vaccine is what gave her hope.

"I'm so glad I got vaccinated. It gave me a glimmer of hope through all the dark times."

The flags will be in front of Coliseum Medical Centers and Coliseum Northside Hospital for the next couple of weeks and they're encouraging people to bring flowers to the memorial sites.