Flippy the burger-flipping robot is on a break already

Flippy the burger-flipping robot is on a break, already 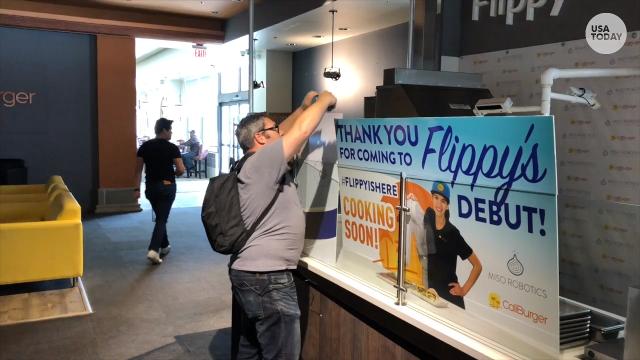 But the burger maker isn't blaming balky robotics for the snafu. Rather, it says humans -- or in this case, not enough of them -- are at fault.

After word got out about a human-replacing robot that could grill as many as 2,000 burgers a day, the Cali Group, which operates the Cali Burger chain says it was swamped with more interest, both from curious diners and potential robot buyers, than it could handle.

When news coverage about Flippy went viral, the Cali Group said it realized it needed to spend more time on training humans to keep up.

While Flippy held up its end of the deal, the restaurant is short of humans to prepare the patties for the grill and then pile on the lettuce and other fixins', said Anthony Lomelino, chief technology officer for Cali Group. For now, there's no robot for those tasks.

The robotic arms of "Flippy's Kitchen" is still on static display at Caliburger. The stage where patrons would normally line up for a peek was dark when USA TODAY visited Thursday, and there was little sign that Flippy would be coming back, but just when was "TBA" -- or to be announced. The restaurant was operating without the robot using its regular, human-run kitchen.

Flippy may be temporarily down, but he's far from out.

So far, tests by restaurants using robots have been mostly viewed as public-relations stunts. In the San Francisco Bay Area, the Zume Pizza chain uses a pizza-making robot to cook the pies while Sally the robot, also in the San Francisco area, makes your salad.

But whether it's burgers, cars or farming, robots are gradually becoming capable of doing jobs that employ millions of workers. In late 2017, a study by the Pew Research Center showed three-quarters of Americans said it is at least "somewhat realistic" that robots and computers eventually will perform most of the jobs now done by people. The survey found respondents worried about the fallout, such as income inequality that would result from mass unemployment.

In the decade leading up to last year, restaurant jobs that focused on fast food rose 40%  to 4.9 million, according to the Bureau of Labor Statistics. That's faster than health care, construction or manufacturing.

Fast-food workers have been pushing for higher wages. Some big chains, facing high turnover and voter mandates, have complied.

But not all. Many workers are still fighting to earn $15 an hour. Caliburger pays employees from $13 to $14 an hour, depending upon the location.

"People who work in fast food aren’t scared of robots. What’s really scary is getting paid so little we need food stamps and public assistance to take care of our families," says Rosalyn King, a McDonald’s worker from Detroit who is active in the union-backed Fight for $15 movement.

For Caliburger, which advertises $3.99 "Southern California-style" hamburgers, keeping employees in the kitchen is difficult, the company says.

“We train them, they work on the grill, they realize it’s not fun ... and so they leave and drive Ubers,” says John Miller, CEO of the Cali Group.

Caliburger hopes to have 50 restaurants open by the end of the year. After Pasadena, it hopes to have a Flippy at its locations in Seattle; Washington, D.C.; and Annapolis, Md.

Once Caliburger works the kinks out, Flippy robots will certainly take jobs away, says Julie Carpenter, a research fellow with the Ethics and Emerging Sciences Group at California Polytechnic State University at San Luis Obispo, Calif. But she doesn't see fast food going 100% robotic. Restaurants will still need cashiers, people to open and close up, and workers for other tasks.

As for reception from the public, she says, "people might think it's cool, or angry that machines are taking over."

Cali's Lomelino was enlisted to get Flippy up and running, and is now training the store manager about the ins and outs of working with robots. Specifically, that means putting burger patties together, seasoning them, and prepping them for the robot to grab, grill, flip and making them ready for customers.

"Mostly it's the timing," he said. "When you're in the back, working with people, you talk to each other. With Flippy, you kind of need to work around his schedule. Choreographing the movements of what you do, when and how you do it."

The moral to the story: technology is cool and can do many wonderful things, but advancements like robots that can cook a hamburger won't happen overnight, Lomelino said.

His advice to other restaurants looking to enter the robotic revolution: "Be ready  for a whole lot of inbound calls."

Credit: Jefferson Graham
The Pasadena location of Caliburger has a stage devoted to the new robot making hamburgers, "Flippy's Kitchen"