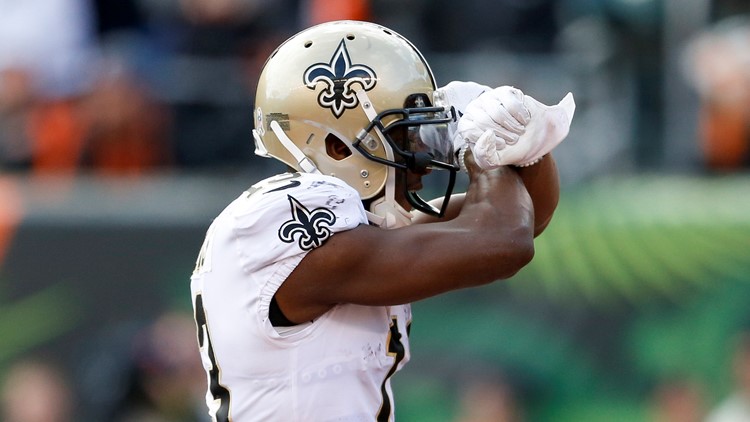 PITTSBURGH — The 32 things we learned from Week 10 of the 2018 NFL season ... with a little extra flavor from our coverage of the Steelers' win over the Panthers:

2. New Orleans piled up 509 yards on the way to embarrassing the Bengals 51-14. Cincinnati's effort — or lack thereof — earned some NFL history as its defense became the first scorched for at least 500 yards in three consecutive games.

3. Dez Bryant won't get to "Threaux up the X" (nice Cajun twist) this season after tearing an Achilles on Friday, just days after signing with New Orleans. But Bryant's new teammates have apparently taken an immediate liking to him, using the opportunity afforded by their scoring outburst to pay tribute by throwing up the X all day at Paul Brown Stadium. Mark Ingram, Alvin Kamara and Mike Thomas all did so after scoring TDs.

All of the @Saints showin' love to @DezBryant today #ThrowUpTheX pic.twitter.com/EJJB24NWKe

@DezBryant already has this shirt ready to fire “Threaux up the X” it reads pic.twitter.com/6qXYcQf3Of

3a. And Dez sure has taken a shine, perhaps even a long-term one, to New Orleans given his apparent plans to try and stick around beyond 2018.

I am I love the saints and the culture https://t.co/q2ClAu98PA

4. The Saints' 51 points were the second most scored in a game this season.

5. The Steelers' 52 points in Thursday's win over Carolina were the most.

6. However it must be noted that New Orleans' Thomas Morstead didn't punt once Sunday, while Pittsburgh's Jordan Berry was pressed into service twice against the Panthers. I asked Steelers QB Ben Roethlisberger — he didn't want to talk about Le'Veon Bell — how much better an offense that's averaged 35.4 points during a five-game win streak can get. “Well, it’s almost perfect. We had incompletions. I don’t know what our numbers were on third down and in the red zone," replied Roethlisberger. "When you score points, that’s always a good thing — but we did punt twice, we never want to punt.”

6a. For the record, Big Ben had all of three incompletions (compared to his five TD passes) on a night when he posted a perfect 158.3 passer rating for the fourth time in his 15-year career. And, since he asked (and you were wondering), Pittsburgh was 8-for-11 on third down and scored TDs on all four red-zone trips.

6b. Only Drew Brees (10) and Peyton Manning (9) have more games with five TD passes than Big Ben's six.

6c. But leave it to Steelers coach Mike Tomlin to throw cold water on his team's stellar performance — one that came against a Carolina squad that looks like a solid playoff bet. “Really big performance, against a really good team on a very short week. So it’s a lot to be proud of,” Tomlin said. “But we’re probably not that good, you know?”

7. If you say so, Coach T. But y'all are pretty damn good — so good, in fact, that it's worth wondering if seeing the Steelers' well-oiled machine was enough for Le'Veon Bell, in conjunction with Bryant's ill-fated injury, to determine there really is very little upside for him (aside from collecting the remaining $6 million from his pro-rated $14.54 million franchise tag) to play this year, a decision he must make by Tuesday afternoon. Even if Bell reports, I think it's in the franchise's best interest — and probably Bell's, too — to render him inactive on game days, at least as long as replacement James Conner and this offense continue to cruise. That tack would also allow Pittsburgh's brain trust to make an informed decision on a protected asset when it comes to determining Bell's future in the coming months. But, boy, Bell's tweets Thursday — he was back in Pittsburgh that night, per Steelers owner Art Rooney II — seemed to paint a picture at that time of a player itching to rejoin his teammates.

Juju is so special man...

7a. A final note on the Steelers, who are once again playing defense, too. After a slow start on that side of the ball, Pittsburgh hasn't allowed more than 21 points during its win streak, and only one team (Atlanta, 324) has eclipsed 300 yards of offense during that five-game stretch. The Panthers were limited to a season-low 242 on Thursday. "We just got whooped, man," said Carolina QB Cam Newton, who threw an awful pick-six under duress from T.J. Watt and was sacked a season-high five times. Added Newton: It was a "humbling piece of pie."

8. Does anyone want the AFC's final playoff berth? The Ravens are regressing while the Jaguars, Dolphins and Bengals all lost Sunday. The Titans or, maybe, the Colts might just fill the breach.

9. Chasing a GOAT? Peyton Manning probably isn't the GOAT in a Brady-dominated quarterbacking universe, but he does have the most touchdown passes in NFL history (539). Fow now. Saints QB Drew Brees added three to his total Sunday and now has 509, a figure that propelled him past Brett Favre for second place.

10. Chasing a GOAT? In Larry Fitzgerald's case, there is no doubt. He now has 15,902 career receiving yards, overtaking Terrell Owens for second all time but still nearly 7,000 shy of Jerry Rice's (perhaps unbreakable) record.

11. Patrick Mahomes didn't manage to establish a new NFL record for most consecutive 300-yard passing games — his streak ended at eight — but he did set a new single-season Chiefs standard for TD passes with his 31st. In case you're overdosed on BBQ, Kansas City has six games to go.

12. Kudos to the Cardinals, who held the Chiefs to a season-low 26 points and 330 yards at Arrowhead and, to the surprise of many, covered a 17-point line.

13. It continues to fall short of the greatness — and maybe the Hall of Fame? — bar, but Frank Gore's consistent production is worthy of further praise. Sunday, he became the first man in league history to post at least 500 rushing yards in 14 straight seasons.

14. How good is Sam Darnold? We're actually not sure yet, but the Jets' first six losses had come by an average of 12 points (and never more than 20) with him on the field. They lost to lowly Buffalo 41-10 Sunday. New York gained 1 yard in the first quarter.

15. How bad is Todd Bowles' Jets defense? Matt Barkley posted a passer rating better than 100 (117.4) for the first time in his career against it ... on his 12th day as a member of the Bills. Buffalo had a season-high 451 yards (118 more than any other game this season) and scored four offensive TDs, one on a pass to LT Dion Dawkins. The Bills entered the game with eight TDs in nine games.

15a. However Barkley loses points for self-scouting (dare we say self-awareness?) by proclaiming afterward: "I knew that I could play in this league. To get back out there after two years, I don't want to be cliche by saying it's like riding a bike, but I've done this for years. I believe I was made to play football, and tonight was just an example of going out there and doing what I was made to do."

17. Welcome back, Khalil Mack. He collected two sacks of Matthew Stafford after missing two weeks with an ankle injury.

18. With the victory, the NFC North leading Bears (6-3) defeated a division rival after losing 10 straight to Black-and-Blue opponents.

19. No one struggles with "Kamara," so why is "Amukamara" a bridge too far — especially when the Bears corner is playing so well?

20. Since the Chargers last played at home in the StubHub Center on Oct. 7, they've traveled more than 14,000 miles while playing in Cleveland, London, Seattle and Oakland. The Bolts won all those games and, now, six in a row overall after dispatching the Raiders on Sunday.

21. I was struck by how cool and collected the Redskins were while visiting them in Ashburn, Va., last week even as they were scrambling following the loss of three offensive starters to injured reserve. But despite having three subs start on the O-line Sunday in Tampa, Washington improved to 6-3 and remained alone atop the NFC East.

22. Bill Belichick and the Patriots are 0-2, losing by a collective score of 60-20, against rookie head coaches who used to work in New England. Mike Vrabel and the Titans crushed New England 34-10 on Sunday, seven weeks after Matt Patricia and the Lions pulled off an upset of their own.

23a. However Brady did catch a 6-yard pass before being brought down by the Turf Monster. He's now 935 shy of 1,000 career receiving yards.

23b. Gisele's right ... if only he could throw it to himself

23c. Titans counterpart Marcus Mariota responded by catching a 21-yard pass on a day when Tennessee routinely outclassed New England. “I wanted to see if it looked any better than theirs," Vrabel said of his team's version of the play.

24. Empty Calorie Award to the Buccaneers. Their offense put up 501 yards ... and three points. Per Elias, that had never happened before in the league's 99 seasons.

25. Todd Gurley's MVP case continues to build steam. He's now one of four players ever to score a touchdown in 10 straight games to start a season. The others? All Hall of Famers (O.J. Simpson, Lenny Moore, Elroy “Crazy Legs” Hirsch).

27. The Seahawks' 273 rushing yards were their most ever in defeat.

28. Recent decades notwithstanding, the Browns have a long and illustrious history. But no Cleveland player — not Jim Brown, not Leroy Kelly, not Bobby Mitchell, not Marion Motley — had ever had a 92-yard run ... until rookie Nick Chubb did it Sunday.

28a. It was also the longest play from scrimmage in the league this year and longest run since 2014.

30. But no congrats offered to Jones' Falcons, whose win streak was snapped at three by Cleveland. Now 4-5, Atlanta must climb a steep mountain if it's to become the only NFC team to reach postseason every year since 2016.

31. Playing for the first time since Sept. 30, Leonard Fournette posted 109 yards from scrimmage and two TDs. Wasn't enough to keep Jacksonville from bottoming into last place in the AFC South.

32a. Dearest mother — your beloved son (Luck) has at least three TD salvos in six straight skirmishes, something no other Union general (or NFL QB) can claim at present. Delightful.

32b. This week's Bortles fact ... Sunday was the first time this season he threw multiple TD passes (2) but wasn't picked off. Diggin' deep, Blake ...