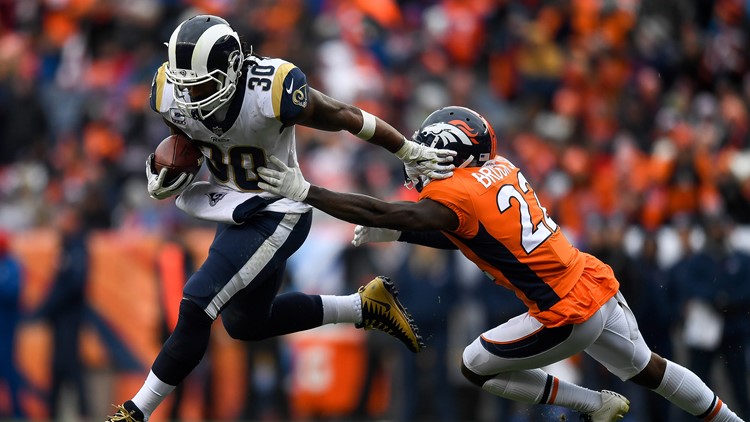 Photo by: Dustin Bradford
Running back Todd Gurley of the Los Angeles Rams rushes against defensive back Tramaine Brock of the Denver Broncos in the third quarter of a game at Broncos Stadium at Mile High on October 14, 2018. (Photo by Dustin Bradford/Getty Images)

32 things we learned from Week 6 of NFL season

1. Who's the MVP front runner? Good luck figuring that one out. Drew Brees? Patrick Mahomes? Jared Goff? Khalil Mack? Move Todd Gurley to the head of the list — for now — after he ran for a career-high 208 yards and two TDs in Sunday's 23-20 win at Denver. Context: Gurley's 870 yards from scrimmage and 11 TDs pace the NFL.

2. Gurley's Rams remained undefeated despite failing to score at least 33 points for the first time this season.

3. The Jets wore all white (not unusual) and gray facemasks (unusual — the club's third different-colored facemask this season) while replicating the look of the 1968 team's Super Bowl III victory over the Baltimore Colts. The J-E-T-S beat the Colts (Indianapolis version) again Sunday, when they also celebrated the 50th anniversary of the only squad in franchise history to hoist a Lombardi Trophy. (Colts QB Andrew Luck even got into the act, toiling like Baltimore's Earl Morrall in Super Bowl III. Luck threw three INTs for the ninth time in his career.)

4. It's been a rough year for kickers, but the Jets' Jason Myers bucked the trend. He made all 10 of his kicks — seven field goals, three PATs — for 24 points, second most for a player in league history who didn't score a TD (Tennessee K Rob Bironas had 26 in 2007). Context: Myers outscored the high-octane Rams and 13 other teams in Week 6.

5. Continuing this theme, new Chargers K Mike Badgley made all six of his tries (5 PATS, 1 FG) in his NFL debut — notable because the Bolts have gotten such spotty production from the position lately. Context: Injured Caleb Sturgis only has one perfect game this season. Since moving to L.A., the Chargers have suffered at least one missed kick in 14 of their 20 games.

6. Tom Brady became the first quarterback in the NFL's 99 years to win 200 regular-season games as he and the Patriots handed the Chiefs their first loss of the 2018 campaign. With victory 200, Brady pulled even with Tim Wakefield and now has 57 more wins than David Price, who started the other big game in New England on Sunday night.

7. Since the NFL added overtime in 1974, this is the first season that has featured at least one game with bonus football each of the first six weeks.

8.Substitute Dolphins QB Brock Osweiler is 4-0 in overtime during his career. Context:Aaron Rodgers is 1-7-1 all-time in OT.

9. Osweiler started because Ryan Tannehill was a late scratch. Miami coach Adam Gase wasn't able to bask in the glow of his team's upset of Chicago for long, replying after being asked for the umpteenth time about Tannehill's injury: "I don’t know. I think there’s some kind of like HIPAA law (Health Insurance Portability and Accountability Act) or something like that. I can’t talk about it. I don’t know. I don’t sit there and ask him all these questions. I just know the guy couldn’t go today. All right? Go ask him. I’m tired of answering this question about this guy. ... I’m over it. Me and him, we know that he’s not right right now, OK?" OK.

10. Shoutout to Dak Prescott, Cole Beasley and the Cowboys passing game — subject of much negative publicity this season, including this space on more than one occasion. Prescott rushed for one TD and hit Beasley (101 yards) for two as a more-balanced Dallas offense took a supposedly elite Jacksonville defense to the woodshed. Context: It was Prescott's first three-TD game since Dec. 10, and Beasley's first two-TD day since Nov. 5.

11.Falcons QB Matt Ryan has at least at least three TD passes in three of his last four games. Context: He didn't pass for three in a single game in 2017.

14. The Bucs almost got Winston into the win column on the final play Sunday in Atlanta, but DeSean Jackson couldn't cleanly handle the final in a series of laterals —the ball was thrown at his feet at the Falcons 5-yard line — on the final play of a game Tampa Bay lost 34-29.

16. Lotta funky uniform combos Sunday, none of them winners — figuratively or literally. The Titans wore monochrome navy for the first time since switching to navy helmets this season. Meh. The Panthers wore white jerseys and black pants. Ugh. The Jaguars wore black jerseys and very teal pants. Eww. The Jags are now 0-2 in those very teal pants. (Meanwhile, the Browns remain winless this year when not wearing their very nifty all-brown Color Rush duds.)

17. Ben Roethlisberger should move home. Context: The Lima, Ohio, native — he played his college ball at Miami of Ohio — is 26-4-1 in NFL games played in Cleveland or Cincinnati after Sunday's comeback win at the Bengals' Paul Brown Stadium.

18. Le'Veon Bell is apparently showing up to work this week ... the Steelers' bye week. He may even get his wish and not have to play very much. Context: Replacement starter James Conner now has three 100-yard, two-TD games this season to go along with 710 yards from scrimmage. Bell had 706 yards at the same point in 2017 and three fewer scores than Conner's seven.

19. Vikings WR Adam Thielen caught 11 passes Sunday. Context: He now owns a league-high 58 (most ever through six weeks), putting him on pace for 155 — which would easily surpass Marvin Harrison's single-season record (143). Thielen also had 123 receiving yards in Minnesota's defeat of Arizona, leaving him one shy of Charley Hennigan's record for most 100-yard games to start a season (1961 Oilers).

20. Bills QB Nathan Peterman, playing in relief of rookie Josh Allen, threw two soul-crushing INTs — including the decisive pick-six in the fourth quarter — to ruin Buffalo's upset bid of the Texans. Context: Nine of Peterman's 79 career NFL passes have been pilfered (11.4%). Brett Favre, notorious for some poor decisions on his way to an NFL record 336 INTs, was swiped on 3.3% of his career throws.

21. Oakland WR Amari Cooper was the latest player brutalized by an egregious helmet-to-helmet hit that officials failed to flag. The NFL keeps talking the talking on player safety but continues to fail when it's time to walk the walk — especially as it pertains to non-quarterbacks.

22. Josh Norman ended the week much better than he started it. After being temporarily benched during the Redskins' Monday Night Football loss in Week 5, he rebounded Sunday to victimize Carolina, his former team, with an interception and forced fumble in Washington's upset.

23. If President Trump really wants to stick it to the NFL, he should start putting tariffs on International Series games. Little chance Great Britain would continue importing them after Sunday's horrendous display of football in London between the Seahawks and Raiders.

25.Context: The Titans look at Gruden's output with envy. Tennessee was shut out Sunday by Baltimore, managing just 106 yards and seven first downs while QB Marcus Mariota was sacked 11 times (a Ravens record) on a day he completed 10 passes.

26. How quickly things change in this National Football League. The NFC East suddenly has a club with a winning record (Washington, 3-2), while Dallas and Philadelphia are treading water at 3-3.

27. Meanwhile, the AFC South is reverting to its post-Peyton laughingstock days with three clubs tied for first at 3-3, while the free fall of Indianapolis (1-5) continues.

29. Bears QB Mitchell Trubisky has nine TD passes in his last two games. He had nine total in his first 15 contests.

30. After collecting at least one sack and forced fumble in each of his previous games for Chicago, Mack was shut out on both counts Sunday.

31. Chad "Swag" Kelly (nephew of Hall of Famer Jim Kelly) is now the preferred quarterback among Denver fans, getting a huge ovation while he took a knee to end the first half Sunday as Case Keenum was being evaluated for a concussion. Kelly follows in a proud tradition of backups that includes Jay Cutler, Tim Tebow, Osweiler, Paxton Lynch ... see where this is probably going? Keenum did extend a dubious streak, however, now intercepted in every game this season for a total of eight (he had 7 last year with Minnesota).

32. Sorry to be the bearer of bad news, @BortlesFacts, but your boy threw for a season-low 149 yards Sunday and has still never beaten the Cowboys. (Bortles is only 0-2 vs. Dallas, but please don't attempt to tamp down the @BortlesFacts hyperbole). And in a very Blake Bortles development, the Jags quarterback now has three games this season with more than 375 passing yards, while he's got fewer than 180 in the other three.