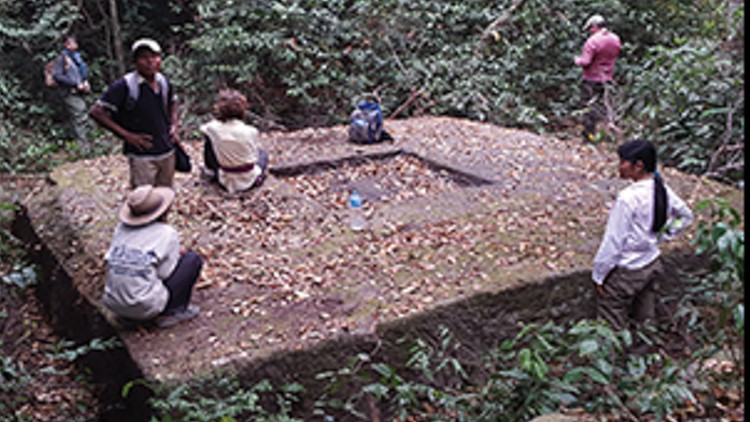 Photo by: Jean-Baptiste Chevance, Damian Evans, Nina Hofer, Sakada Sakhoeun, Ratha Chhean
An aerial view of the south-east side of Phnom Kulen National Park plateau. This 'holy mountain' and birthplace to the Khmer empire, continues to experience vast deforestation, putting under threat not only its natural resources, but the archaeological sites nested among its forests. ©Erika Pineros **Note: Not for commercial use. Editorial use only. No Book Sales. Mandatory credit/byline. Not for sale for marketing or advertising campaigns. Image to be distributed exactly as supplied. No archive. All rights and copyright retained by photographer. No Syndication.

Researchers have uncovered an ancient "lost city" that was one of the first capitals of the Khmer Empire in Cambodia, according to a new study published by Cambridge University Press.

Scientists led by the Archeology and Develeopment Fund used laser scanners from airplanes to scan the thick forest canopy that covered the city of Mahendraparvata. The lasers would send out pulses of infrared light, which would hit the ground and bounce back to the aircrapft, allowing researchers to create 3D models of the terrain in the Phnom Kulen plateau.

"Here, we confirm the hypothesis, based on this accumulated body of evidence, that Mahendraparvata -- the eighth- to ninth-century AD capital of the Khmer Empire -- was located on the Phnom Kulen massif," the report read. The project spanned from 2012 to 2017.

The research findings revealed a "formally planed, densely inhabited urban core surrounded by an extensive network of low-density neighborhoods." The most unique aspect of the city was that it is arranged in a giant grid.

The format of the city was described as "distinctly urban" in the report. A large-scale water management system that included dams and an unfinished reservoir were also discovered.

"Even if it was never functional, the reservoir at Mahendraparvata was a prototype for the vast artificial lakes that would become a defining feature of later Angkor," the team wrote.  Angkor was the capital of the Khmer empire after Mahendraparvata.

After the city was abandoned for Angkor, it was likely that any wooden structures decayed, which made it harder to find the city. At it's biggest, the Khmer empire spanned what is now modern day Cambodia, Thailand, Laos and southern Vietnam.