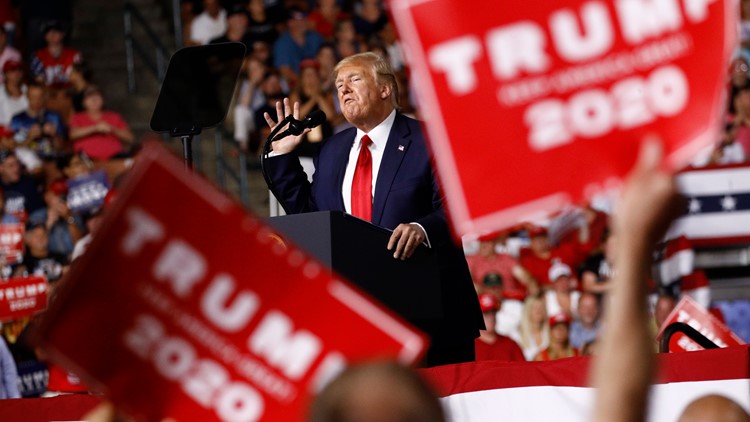 At New Hampshire rally, Trump ties US success to 2nd term: 'You have to vote for me'

MANCHESTER, N.H. — President Donald Trump on Thursday sought to reassure his supporters about the state of the U.S. economy despite the stock market volatility and told rallygoers in New Hampshire, a state that he hopes to capture in 2020, that their financial security depends on his reelection.

"Whether you love me or hate me you have to vote for me," Trump said.

Speaking to a boisterous crowd at Southern New Hampshire University, Trump dismissed the heightened fears about the U.S. economy and a 3% drop Wednesday in the Dow Jones Industrial Average, which was fueled by a slowing global economy and a development in the bond market that has predicted previous recessions. Avoiding an economic slump is critical to Trump's reelection hopes.

"The United States right now has the hottest economy anywhere in the world," Trump said.

Trump, who reached the White House by promising to bring about a historic economic boom, claimed, as he often does, that the markets would have crashed if he had lost his 2016 bid for the presidency. And he warned that if he is defeated in 2020, Americans' 401(k) retirement accounts will go "down the tubes."

The president also defended his tactics on trade with China. He has imposed 25% tariffs on $250 billion of imports from China and has threatened to hit the remaining $300 billion worth of Chinese imports with 10% tariffs. He has delayed that increase on about half of those items to avoid raising prices for U.S. holiday shoppers. He said China wants to make a trade deal with the U.S. because it's costing the country millions of jobs, but claimed that the U.S. doesn't need to be in a hurry.

RELATED: China threatens retaliation if US tariff hikes go ahead

Trump's rally was the first since mass shootings in El Paso, Texas, and Dayton, Ohio, killed 31 people and wounded dozens more. The shootings have reignited calls for Congress to take immediate action to reduce gun violence. Trump said the U.S. can't make it more difficult for law-abiding citizens to protect themselves, but he advocated for expanding the number of facilities to house the mentally ill without saying how he would pay for it.

"We will be taking mentally deranged and dangerous people off of the streets so we won't have to worry so much about them," Trump said. "We don't have those institutions anymore, and people can't get proper care. There are seriously ill people and they're on the streets."

RELATED: Coroner: Dayton gunman had drugs in his system during shooting

Along with discussion of the economy and guns, Trump hit a number of other topics, accusing the European Union of being "worse than China, just smaller"; bragging about his 2016 electoral victories in Wisconsin, Michigan and Pennsylvania; and calling it a "disgrace" that people were throwing water on police officers in New York.

The rally was interrupted about a half an hour in by a handful of protesters near the rafters of the arena. As the protesters were being led out, a Trump supporter wearing a "Trump 2020" shirt near them began enthusiastically shaking his fist in a sign of support for the president.

But Trump mistook him for one of the protesters and said to the crowd: "That guy's got a serious weight problem. Go home. Start exercising. Get him out of here, please."

After a pause, he added, "Got a bigger problem than I do."

New Hampshire, which gave Trump his first GOP primary victory but favored Hillary Clinton in the 2016 general election, is doing well economically, at least when using broad measures. But beneath the top-line data are clear signs that the prosperity is being unevenly shared, and when the tumult of the Trump presidency is added to the mix, the state's flinty voters may not be receptive to his appeals.

Some Democratic presidential campaigns are holding events to capitalize on Trump's trip. Joe Biden's campaign set up down the street from the arena to talk to voters and enlist volunteers. A group for Pete Buttigieg's campaign gathered in nearby Concord to call voters about his support for new gun safety laws. And Cory Booker urged Trump to cancel the speech and instead order Congress to take immediate action to prevent gun violence.

RELATED: Video of Cardi B and Bernie Sanders chatting politics in a nail salon released

At 2.4%, New Hampshire's seasonally adjusted unemployment rate for May was among the lowest in the nation. But wage growth is significantly below national gains. Average hourly earnings rose a scant 1.1% in New Hampshire in 2018, lagging the 3% gain nationwide, according to the Bureau of Labor Statistics.

In other ways, like the home ownership rate — first in the nation — and median household income — seventh in the U.S. — the state is thriving, according to census data.

New Hampshire's four Electoral College votes are far below that of key swing states like Florida, Wisconsin and Michigan, but its influence can prove powerful in close election years like 2000, when George W. Bush's victory in the state gave him the edge needed to win the White House.