Malls are doing all they can to keep the jolly old man safe from the coronavirus, including banning kids from sitting on his knee. 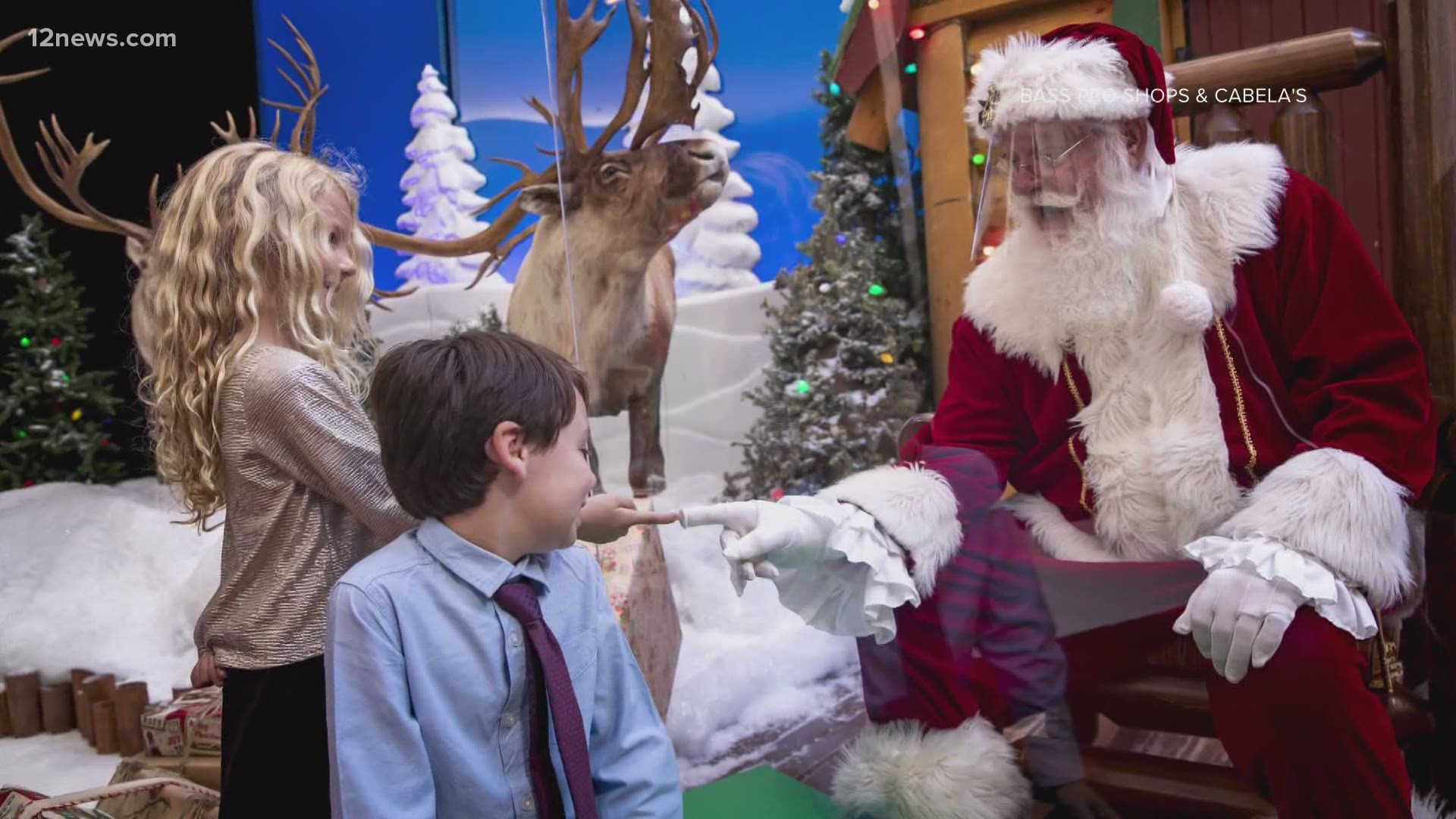 NEW YORK — Santa Claus is coming to the mall — just don’t try to sit on his lap.

Despite the pandemic — and the fact that Santa's age and weight put him at high risk for severe illness from the coronavirus — mall owners are going ahead with plans to bring him back this year.

But they are doing all they can to keep the jolly old man safe, including banning kids from sitting on his knee, no matter if they've been naughty or nice.

Kids will instead tell Santa what they want for Christmas from six feet away, and sometimes from behind a sheet of plexiglass. Santa and his visitors may need to wear a face mask, even while posing for photos. And some malls will put faux gift boxes and other decorations in front of Saint Nick to block kids from charging toward him.

Other safety measures include online reservations to cut down on lines, workers wiping down holiday-decorated sets, and hand sanitizer aplenty. Santa’s hours are also getting cut to give him a break from crowds.

Macy’s canceled its in-person visits this year, saying it couldn’t provide a safe environment for the more than 250,000 people that show up to see Kriss Kringle at its New York flagship store.

But malls, which have struggled to attract shoppers for years, are not willing to kill a holiday tradition that is one of their biggest ways to lure people during the all-important holiday shopping season.

“You have to give them a reason to come or they’ll stay home and shop online," says Michael Brown, who oversees the retail team at consulting firm Kearney.

More than 10 million U.S. households visited Santa in a mall or store last year, according to GlobalData Retail’s managing director Neil Saunders. Nearly 73% of them also spent money at nearby restaurants or stores, he says.

“Santa is the magnet that attracts people to malls and without that attraction, malls will struggle more to generate foot traffic,” says Saunders.

Mall operator CBL, which filed for bankruptcy earlier this month, plans to bring Santa to nearly 60 malls at the end of November, about three weeks later than last year. The company decided against a plexiglass barrier because it didn’t look right in photos. But Santa will be socially distanced and wear a face mask. He may also put on a plastic shield to protect his face.

Mall owner Brookfield started planning in-person Santa visits at 130 of its shopping centers in April, opting for sleighs and gift boxes where visitors can sit away from Santa. At one of its malls, The SoNo Collection in Norwalk, Connecticut, a round piece of plexiglass will be placed in front of Santa so it looks like he’s inside a snow globe.

But the precautions may not be enough to convince some shoppers.

“It just seems like such a bad idea, just being in a mall,” says Emma Wallace of Alexandria, Virginia, who decided against taking her toddler to his first visit with Santa this year.

“We’re just so sad," she says. "We were really looking forward to that picture that seems like every parent has, where they’re sort of terrified or just bemused by the whole Santa thing.”

Malls realize many people may stay home. Cherry Hill Programs, which will bring Santa to more than 700 malls, is also offering Zoom calls with him for the first time in its 60-year history. And Brookfield teamed up with virtual Santa company JingleRing, giving people a way to chat with Santa from home.

“When you think about the high risk profile for COVID, you’re kind of drawing a picture of Santa,” Taylor says.

He’ll be doing video calls with families and has been holding online classes to get other Santas camera-ready. Meeting kids virtually means getting them to speak up more, since the calls usually run seven minutes — about twice as long as mall visits, where the main objective is to snap a good picture.

Going online gives Santa a chance to experiment with his attire. Some may ditch the formal red suit for vests and rolled up sleeves, since Santa is presumably calling from the North Pole and running a toy workshop full of busy elves.

“Up at home, we’re working,” says Taylor. “We have presents to make. We’ve got reindeer to feed.”

But there’s some parts of Santa’s look that can’t change. JingleRing, which has signed up more than 400 Santas, held online training sessions on how to use at-home bleaching kits to transform gray hair and beards into Santa’s snow white hue. They were also advised to buy teeth whitening strips.

Stephanie Soares is sticking to the old way. She brought her daughter, Gia, to a Bass Pro Sports store last week in Bridgeport, Connecticut, to take a picture with Santa, who wore a clear plastic face shield and sat behind a glare-free acrylic barrier that sometimes made it hard to hear what the kids were saying. A worker sprayed down the barrier after each visit.

“Even though we’re in a pandemic, it’s important that the kids are still able to be kids and still keep up with the regular traditions," says Soares.