The drought ravaged the pastures where cattle and other livestock feed. Crops are also suffering. Similar scenarios are expected in the coming years. 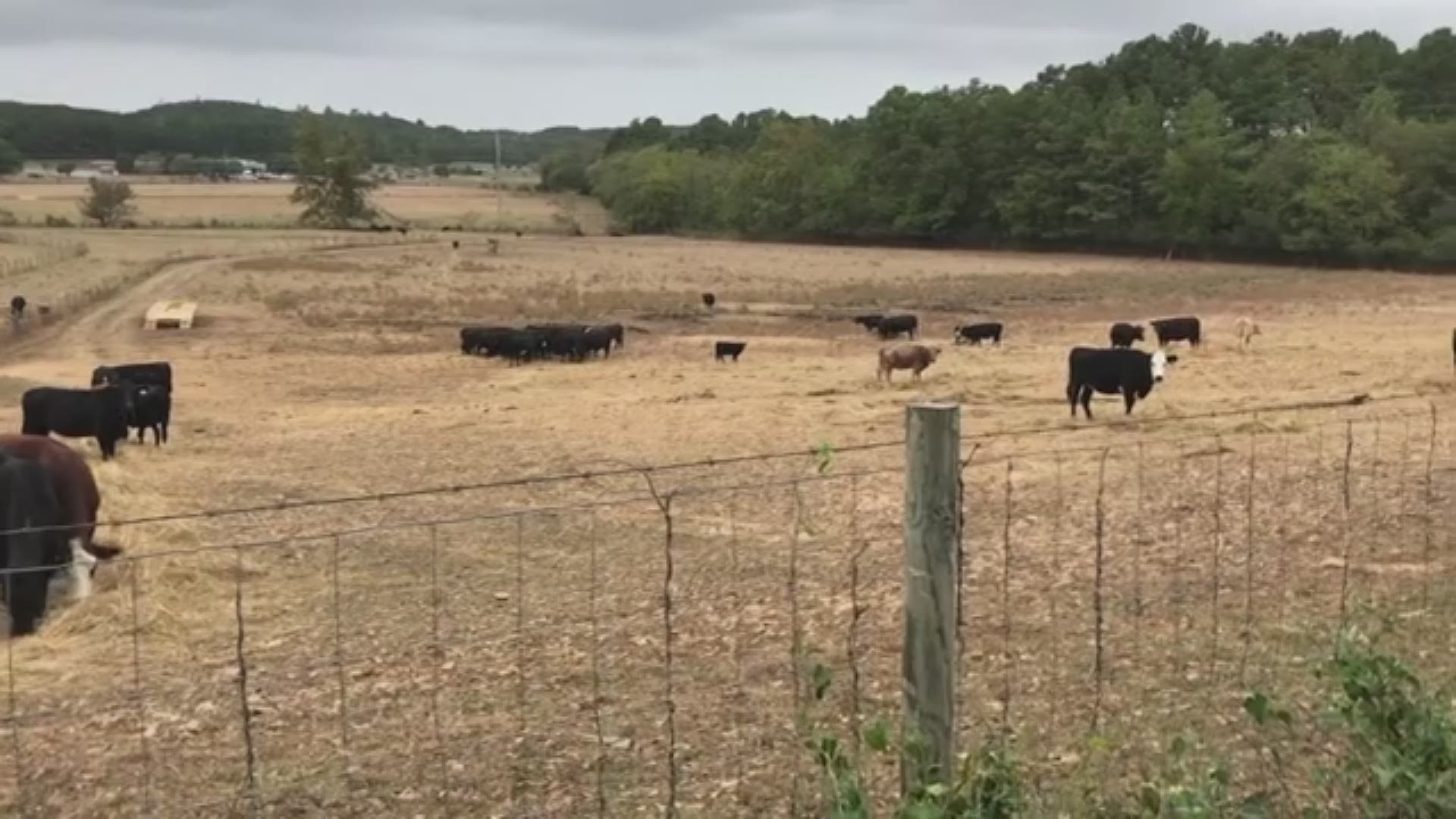 CARTERSVILLE, Ga. — In a vast expanse of the South stretching from Texas to Maryland, there are growing concerns for the cattle, cotton and corn amid a worsening drought fueled this past summer by record high temperatures.

One of the bullseyes marking the nation's driest areas is Bartow County, Georgia, where extreme drought conditions have kicked up buckets of dust and left cattle pastures bare in farm country northwest of Atlanta. It has been among the hardest-hit areas in the more than 12 southern states where more than 45 million residents are now living in some type of drought conditions, the most recent U.S. Drought Monitor report shows.

Across the South, the drought has ravaged the pastures where cattle and other livestock feed. The majority of those lands are in either poor or very poor condition in Georgia, Alabama, Kentucky, Tennessee, the Carolinas and West Virginia, the U.S. Department of Agriculture reported in its most recent crop report. Pasture and range conditions were in even worse shape in Virginia, where 71% of the land is in poor or very poor shape.

RELATED: Flash Drought? What Is That?

"Looking ahead if we don't get enough rain and the pastures don't recover, we'll be dipping into winter feeding hay before time, or have to liquidate some cattle," said Dean Bagwell, a cattle farmer in Bartow County.

"It is frustrating with the weather, complicated by cattle prices not as high as we'd like to see them," he said. "So if you are forced to sell, then you're going to have less income. It just all plays into the frustration of trying to make a living farming."

At a farm where people come to see the kangaroos, camels and other wildlife in Cartersville, Georgia, owner Scott Allen points out the "baked mud" and cracked Earth in the bed of a small stream near his zebras.

"It's been probably better than 60 days since we had any precipitation that amounted to anything," Allen said. "The dust is just relentless."

The animals are fine, he said, but he now must use water from the city since the drought has nearly dried up the natural spring water on the farm.

Crops are also suffering. Nearly a quarter of the cotton crop in Texas is in poor or very poor condition, the USDA crop report shows. In Texas, more than 13 million people — more than half of the state's population — are experiencing drought conditions, the center reported. And extreme drought spread into several new areas of central and eastern Texas in recent weeks.

The heat has played a large factor, forecasters say. In August, high temperatures and humidity sent the heat index soaring across the South. The heat index — what it actually feels like —rose to 121 degrees (49.4 Celsius) in Clarksdale, Mississippi, on Aug. 12. The heat stuck around into October, bringing record-high temperatures as the month began. Several Alabama cities this year have seen their hottest October temperature ever recorded.

A new report on the drought is expected later Thursday showing the damage already done, but now Bagwell and other farmers are concerned about the long-term outlook as late October is among the driest periods of the year in the South. There is one hope for farmers: Long-range forecasts point toward above-normal precipitation in the Southeast later this month, according to the Climate Prediction Center.

In coming years, climate change is expected to intensify droughts and increase their frequency, scientists warned in the National Climate Assessment released by the White House last year.

Heat waves — such as the one that brought record-breaking temperatures to the South in the summer — are expected to hit this region harder than others in the U.S. in coming years, the report states. Cities with a particularly high risk of future heat waves include Memphis, Tennessee; and Raleigh, North Carolina. New Orleans and Birmingham, Alabama, are also cited in the report as having trends toward more intense and frequent heat waves.

The combination of dry weather and intense heat can create drought conditions relatively quickly, resulting in a "flash drought."

The term came about during a 2001 drought in the Great Plains. Mark Svoboda, director of the National Drought Mitigation Center, was looking for a way to describe the rapid onset of that drought and came up with "flash drought," he recalls. The phrase resonated with people and made headlines in The Omaha World-Herald's coverage of that drought. Back then, Svoboda and other scientists had few tools to track flash droughts. Within the past decade, however, satellite imagery has given forecasters much better data to monitor a rapidly-spreading drought, Svoboda said.

At the Tri-County Gin in Cartersville, one of the last remaining cotton gins in north Georgia, dust from the Georgia red clay coats the pickup truck where owner David Smith peers over the steering wheel and ponders the dry conditions.

"It's not a complete, overall disaster, but there are places that are hurting bad," he said.