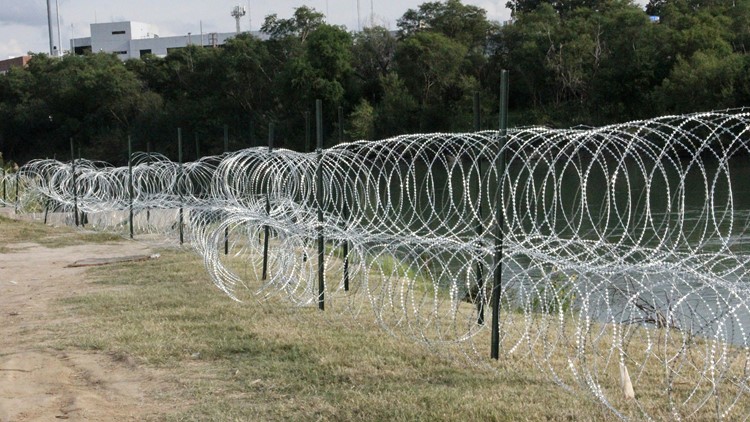 Photo by: THOMAS WATKINS
Barbed and concertina-wire can be seen installed in a public park in Laredo, Texas, across the Rio Grande River from Mexico on November 17, 2018.

WASHINGTON — The White House has authorized active-duty military troops stationed along the southwest border to use lethal force, if necessary, a significant escalation of the support role they had been tasked with that may run afoul of a 140-year-old law that generally bars the military from operating within U.S. boundaries.

White House Chief of Staff John Kelly signed a memo late Tuesday expanding the mission of the 5,800 troops to include protecting Customs and Border Protection agents. That represents a sharp change in the orders given to troops currently deployed in California, Arizona and Texas, who had been lining the border with concertina wire and providing only logistical support to CBP personnel.

Defense Secretary James Mattis confirmed the new guidelines to reporters on Wednesday but downplayed the level of interaction his troops will have with migrants. He said most troops aren’t carrying weapons and that the military would stay away from civilian law enforcement roles such as arrests, which are forbidden under in the Posse Comitatus Act.

The law prohibits the federal government from using the armed forces in a domestic police role, except in situations specifically authorized by the Constitution or Congress.

Mattis emphasized that he would use his expanded authorities only in response to a specific, detailed request from Secretary of Homeland Security Secretary Kirstjen Nielsen, and that none has yet been made.

"I now have the authority to do more," Mattis told reporters. "Now we'll see what she asks me."

The memo was first reported by the Military Times.

Mattis’ assurances did little to quell criticism from advocacy groups worried about Trump’s increasingly dangerous actions and rhetoric as thousands of migrants — mostly from Central America — line up in Tijuana, Mexico, and elsewhere to try to enter the country to request asylum. The president had previously suggested that troops would be allowed to fire upon migrants if any of them threw rocks at the U.S. troops, but neither the Pentagon nor the Department of Homeland Security backed up that assertion.

With the new orders, Michael Breen, president of Human Rights First, said the White House is officially "upping the ante" against migrants, and creating a hostile environment that could lead to deadly confrontations.

"This legally dubious 'cabinet order' creates confusion, undermines morale, and may very well lead to violence," Breen said. "Americans should be thankful that those currently serving are likely to exhibit more judgment than their commander in chief."