The death of 20-year-old Abbey Connor sparked an 18-month investigation after she drowned at a Mexican resort last year. 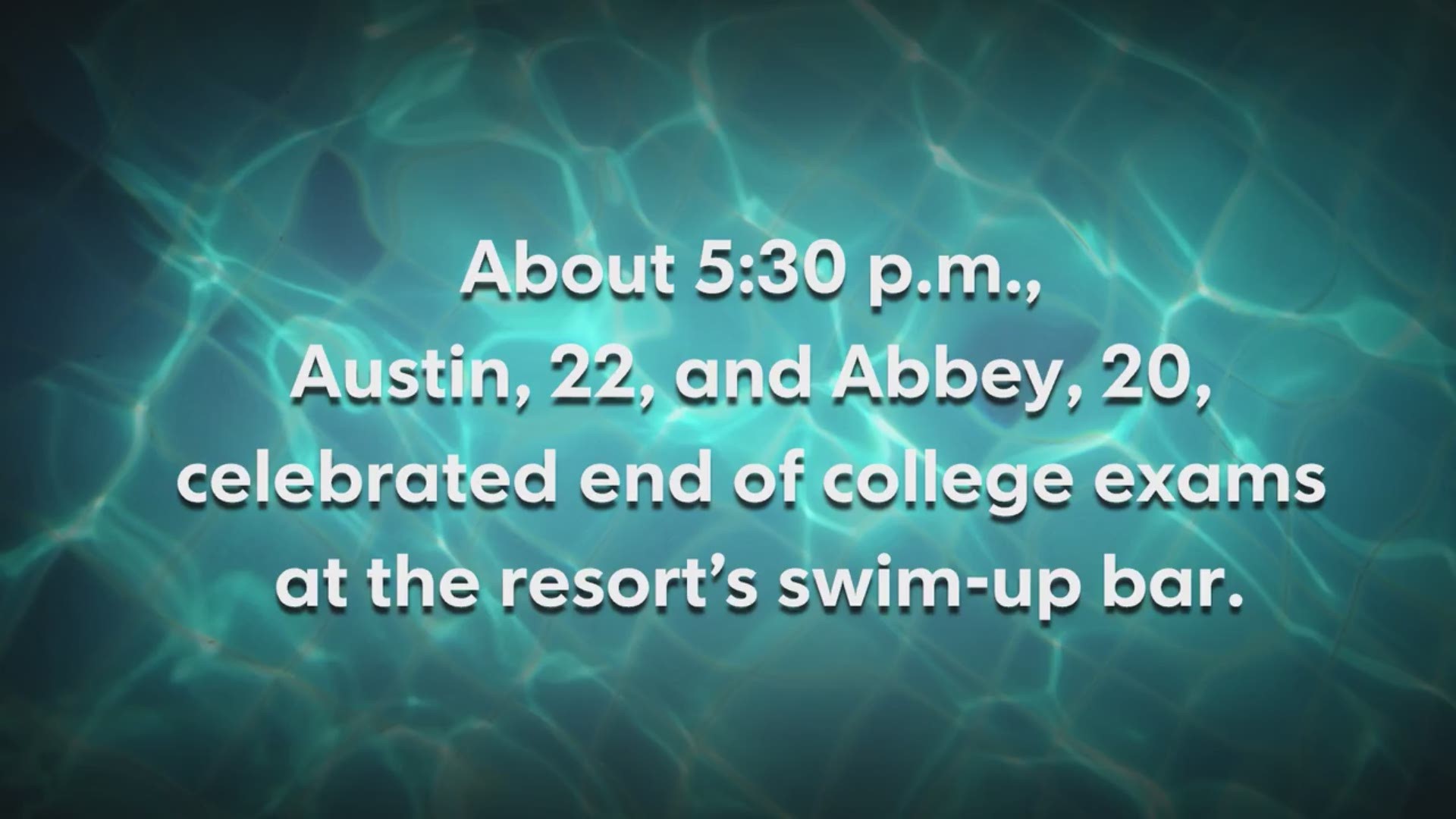 Calling her death “tragic, senseless and entirely avoidable,” the family of Abbey Conner filed a civil lawsuit Wednesday in Florida against the Mexico resort where Conner drowned last year and the U.S.-based website company that manages the resort’s bookings.

The 24-page wrongful death complaint outlines the events that unfolded the afternoon Conner and her family arrived in Playa del Carmen at the upscale, all-inclusive resort for a vacation.

It asserts that Iberostar and its website operator, Visit Us, “knew that alcoholic beverages being served at the Hotel Iberostar Paraiso del Mar were tainted, substandard, poisonous, unfit for human consumption and/or otherwise failed to meet bare minimum standards for food and beverage safety” and failed in their “duty to protect Abbey against risks of physical harm.”

“I think it’s about time that somebody is held responsible for something that has been going on for far too long,” said Bill Conner, Abbey’s dad. “We’re looking for justice for my daughter and for others behind us that have never been vindicated.”

The death of Conner, a 20-year-old University of Wisconsin-Whitewater student from Pewaukee, sparked an 18-month investigation by the Milwaukee Journal Sentinel that has since exposed dozens of tragedies experienced by tourists visiting resorts in Mexico in recent years.

The investigation revealed how travelers blacked out after drinking small and moderate amounts of alcohol, in some cases just one drink.

Couples and friends reported blacking out simultaneously and regaining consciousness hours later to learn they had been assaulted, robbed, taken to the hospital and, in some cases, jail.

Several reported their loved ones drowned.

It’s unclear whether the vacationers were deliberately drugged or became random victims of adulterated alcohol. Some reported getting violently ill, vomiting, foaming from the mouth and nose, and other physical symptoms. Others blacked out and woke up with no ailments.

In each case, the victims said hours of their memories were voided out.

They told of being forced to pay thousands of dollars before receiving medical care and getting little to no help from police in Mexico and the resorts themselves. They said they tried to warn future travelers by posting their stories to TripAdvisor, but the website had repeatedly deleted their posts.

And what surprised most of them: The U.S. consular offices and Department of State did little to help.

The Journal Sentinel has received more than 200 reports from tourists with troubling or terrifying experiences at luxury resorts. The most recent from two couples who visited Los Cabos earlier this month. Three of the four blacked out and later became violently ill after drinking a couple of margaritas. One woman in the group drank something different and did not get sick. She took pictures and later described to the others, all of whom had no memory, some of the things that transpired.

Abbey Conner was on a winter break with her brother, Austin, mom and stepdad in January 2017 when she drowned under suspicious circumstances in a shallow area of the resort pool before dinner time.

Austin nearly drowned at the same time and was pulled from the pool with a golf-ball sized lump on his head and a concussion. Medics later noted that Abbey had a cracked collarbone. Austin remembered that he and Abbey were drinking tequila at the swim-up bar but he lost consciousness after doing a shot with a group of people. He awoke later in an ambulance with no idea what happened.

The Conner family’s lawsuit, filed in circuit court in Florida, contends Iberostar and affiliated companies failed to take adequate safety measures such as preventing tainted alcohol from entering the premises, ensuring staff was properly trained and providing adequate surveillance cameras and lifeguards around the pool.

Furthermore, Iberostar failed to warn guests about the known threats and refused to cooperate with the family’s investigation into the death, denying an investigator access to the property, the suit contends.

Gary Davidson, an attorney with Miami-based Diaz Reus & Targ who is representing the family, said the notion that Abbey and Austin Conner were simply drunk is impossible.

“Do people get drunk? Of course. Do people get sick from alcohol? Of course. But people do not, two people, do not lose control of their bodily functions at the same time in the shallow end of a swimming pool,” Davidson said, noting that Abbey and Austin were of very different body sizes. “There’s a big difference between being drunk and losing self control.

“Combine that with what we know has happened in the Playa del Carmen area over the last few years ... Clearly there is a fundamental problem, or there was at the time when Abbey died, as a result of having consumed this concoction, whatever it was, which was portrayed as normal alcohol, which it was not.”

The complaint, seeking unspecified damages, recounts how a guest reported to a security guard that it appeared two people were drowning in the pool. Abbey was floating face down, Austin was kicking and splashing uncontrollably. The guard radioed other guards and pulled the siblings from the pool. They attempted CPR on Abbey.

Ginny and John McGowan, Abbey’s mom and stepdad, had been waiting for Austin and Abbey in the hotel lobby to go for dinner. When the kids never arrived, Ginny asked a receptionist at the lobby desk to call their room.

That’s when hotel staff told her that her children were at the hospital.

When John and Ginny McGowan arrived at the hospital, they found Austin had regained consciousness but was sedated.

Abbey was on a ventilator and unresponsive. She would need to be transferred to another hospital in Cancun.

Before the first hospital would transport, they said the family would need to pay the $6,371 bill and put down a $10,000 deposit for the Cancun hospital.

The family spent the next day arranging an emergency airlift back to the U.S. The closest available trauma center was Broward Health Medical Center in Fort Lauderdale, Florida.

Abbey had made it clear years earlier that she wanted to be an organ donor and the family kept her on life support until organ recipients were found.

“Abbey’s plight was reasonably foreseeable,” and “despite their knowledge that tainted alcohol festered within local supply chains in Mexico, particularly in resort areas such as Playa del Carmen,” Iberostar and affiliated companies failed to protect her, the complaint says.

Iberostar has repeatedly denied any of its alcohol has been tainted and said its supply chains are secure. On Wednesday, an Iberostar spokeswoman said the company does not comment on pending litigation.

Mexican authorities have long acknowledged a problem with illicit alcohol but deny a widespread issue with it being tainted. A 2017 report by government officials and industry representatives found as much as 36 percent of the alcohol consumed in the country is illicit, meaning it is produced under unregulated conditions.

Methanol is commonly used in windshield washer fluid and as a solvent and is extremely toxic even in small quantities.

They did not say where the supply was headed.

In a sweep through tourist hot spots last year, in the wake of initial Journal Sentinel reports, government authorities seized 90 gallons of illicit alcohol, temporarily shut down a bar in a resort within the Iberostar complex where the Conners stayed and uncovered a clandestine distillery with 10,000 gallons of alcohol produced with “bad manufacturing practices.”

The Conner family’s lawsuit contends the distillery was a distribution center and delivery service that is a vendor retained by Iberostar and supplied alcohol to the resort.

The government in Mexico has long promoted a public service campaign that encourages bars and restaurants to destroy liquor bottles once they're empty so they can’t be refilled with bootleg booze.

Prior to the Journal Sentinel’s investigation, the U.S State Department had not been tracking rapes, injuries or other troubling incidents experienced by U.S. citizens vacationing in Mexico.

The department has since begun doing so, but has refused to release the details describing when or where the events took place. A department spokesman told the Journal Sentinel the reports are being used to “provide consular assistance and raise concerns with our Mexican counterparts.”

As of Wednesday, the department had received complaints from 29 people who suspected they were served tainted alcohol.

The Office of Inspector General opened an investigation into the State Department’s handling of the cases nearly a year ago. Officials have said repeatedly in recent months the findings would be released soon.