WUSA9 has been asking the Department of Defense and service branches for interviews about the situation for weeks. Leaders in the Air Force and Army sat down with us 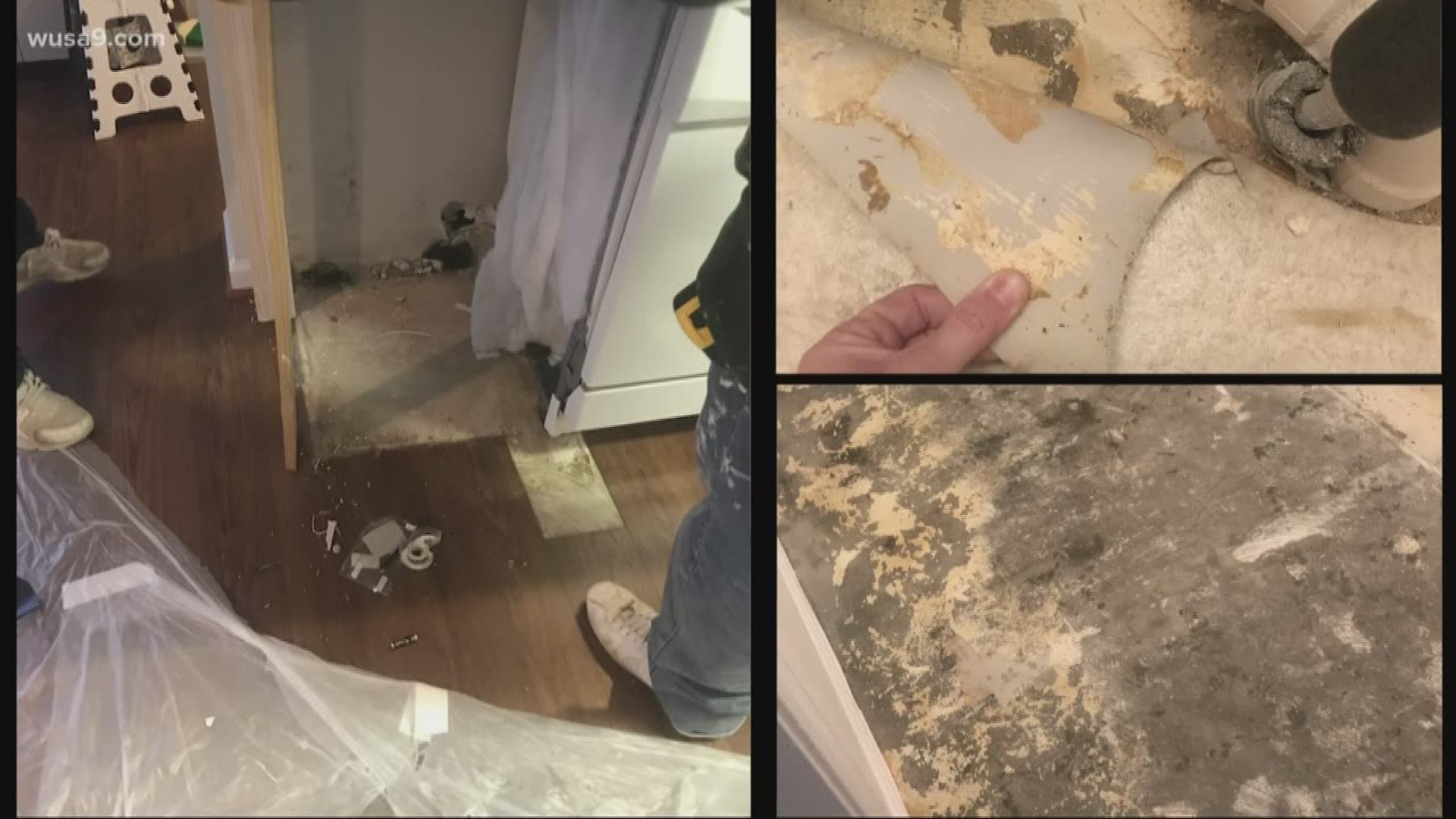 WASHINGTON -- Military leaders responsible for fixing the dangerous and sometimes sickening conditions inside the homes of military families are answering questions from WUSA9. The interviews, which are part of the “Dangers at Home” investigation, hold officials accountable for the issues.

Mold invaded the walls of a home on Quantico in Virginia.

Credit: Heidi Starr
A busted pipe revealed mold on insulation at a house on Quantico Marine Corps Base

“You don't feel that you should worry about your health at home,” Marine Corps spouse Heidi Starr lamented.

Lead paint on windows and doors at Fort Benning, Georgia will forever impact the Brown family's life. They live in Northern Virginia now, where the consequences of their time in base housing are with them every day.

Credit: (Photo submitted by military family who did not want to be identified)
Lead paint chips off window frame inside military housing on Fort Benning, GA.

“In our home, it's like we have a constant four-year-old,” mom Darlena said of her son John Cale Jr. “He's almost nine, but it's as if he's three or four.”

Military families continue to reach out to WUSA9 to share their stories of the "dangers at home."

Almost all of the base housing across the country and in their pictures, is managed by private contractors. The military gave up ownership, and some would say oversight, back in the late 1990s.

WUSA9 has been asking the Department of Defense and service branches for interviews about the situation for weeks.

John Henderson is the Assistant Secretary for the Air Force division in charge of housing. We asked him if the airmen and women who lived in these conditions deserve an apology.

“I think so, absolutely,” he responded. “For the ones who were forced to or ended up living in an unsafe and unhealthy conditions, yeah, absolutely. Challenges with infrastructure are part of the business, but it is absolutely unacceptable when those challenges go unaddressed.”

Jordan Gillis is one of the higher-ups in the Army division in charge of housing.

“I think we got complacent,” he said. “So, we had a number of years, a lot of years where we were focused on deployment and war-fighting. And we let some of the things that we contracted out go without the sufficient oversight.”

Gillis met WUSA9 at a home on Virginia's Fort Belvoir. He explained senior Army commanders got in touch with all the people living in base housing. They held town halls at every installation; each one now has a hotline for residents. There's also a medical hotline for people who have health concerns because of their living conditions.

Credit: U.S. Army
The Army has created housing hotlines for each base.

Army leaders aren't only trying to make this right for the soldiers and their families. They're also attempting to hold accountable the contractors in charge, in ways they've never done before.

We've learned the military has been paying the private companies incentive fees. They've actually been getting bonuses, despite the horror stories. Now, Gillis says the Army plans to renegotiate why they'll give out the extra cash.

1 / 11
(Photo submitted by military family who did not want to be identified)
Mold on ceiling and walls of military home on Randolph Air Force Base, TX.

“So for instance, where we may now emphasize adherence to budget or development plans, we would de-emphasize that and highlight resident satisfaction, work order quality and things that are more important to the residents,” Gillis said.

Henderson told us the Air Force is also considering that. After reviewing all of the housing in that branch, leaders followed up with more than 11,000 in-home visits. Those led to more than 5,000 work orders. The Air Force is looking to add almost 300 people to the housing management offices. One of those positions would be a housing advocate on base.

“In some of our bases we were just finding that the level of customer service and the quality level of the maintenance that was getting done in the homes wasn't up to our expectations,” Henderson elaborated.

We asked if that is something the Air Force commanders should have been aware of.

“I think commanders were aware of it, but they were struggling with how to fix that,” Henderson answered,

Across the branches, a tenant's bill of rights could help. It would hit the private companies where it hurts, if they don't hold up their end of the deals.

“The bill of rights envisions that the tenants will have the right to set aside their rent payments in the event of a dispute, until that dispute is adjudicated,” Gillis explained.

A bill of rights is only as strong as enforcement of it. We wanted to know how the branches will make sure this isn’t just a piece of paper.

“I think the bottom line answer to that question is making sure that it's incorporated to the extent we can into the lease, into a lease agreement, because then it becomes a binding agreement by both parties,” Henderson told us.

That document is going through the vetting process. Families who live in these homes are now getting a look at the document.

We asked Henderson and Gillies what they expect in the future:

Laura Geller: Once these larger issues are fixed, how does the Air Force make sure that you never get back to this situation again?

John Henderson: The how is, we take the initiatives we're doing now, the initiative isn't complete until we would get it codified in a permanent policy, and it becomes a normal way for us to do business in the future.

Laura Geller: How do you earn back their trust?

John Henderson: Until we start making substantive actions and we have in many cases, and they start seeing an improvement, that we’re following through doing what we said we would do, that’s how we earn the trust back. We earn it back in little bits and we earn it back in time and we earn it back through commitment and competence and just through the character of our actions.

Laura Geller: At what point do you guys say ‘ok, we’ve fixed this issue’ or is that going to be something you can ever say?

Jordan Gillis: I don't think we can ever say 'it's fixed and we're done.' I think we've realized we can't ever get to the point where we take this for granted.

We requested interviews with the Navy and Marine Corp, as well. Neither branch was ready to go on camera.

In the meantime, Air Force leaders said the FBI is investigating fraud allegations at a base in Oklahoma. We've also learned they reviewed concerns in Washington State and California.

“The Air Force takes the health and safety of our Airmen and their families seriously and thoroughly investigates any allegation of fraud associated with our privatized housing," Henderson wrote in a statement. "We took immediate action to review the allegations raised at Tinker, Travis and Fairchild Air Force Bases. Where we found discrepancies in the maintenance records, we took corrective measures to include withholding performance fees, placing the Project Owner on a corrective action plan, increasing oversight and referring allegations of fraud for investigation.  We have taken, and will continue to take, action to ensure our Project Owners are held accountable to provide our Airmen safe and healthy homes. Our service members and their families deserve nothing less."

As of right now, we're told the investigation has not spread to homes in our area.

This is one episode in our "Dangers at Home" series. Watch more episodes below.