"That's how I want to be remembered," Erika Rucks says. "I touched people" 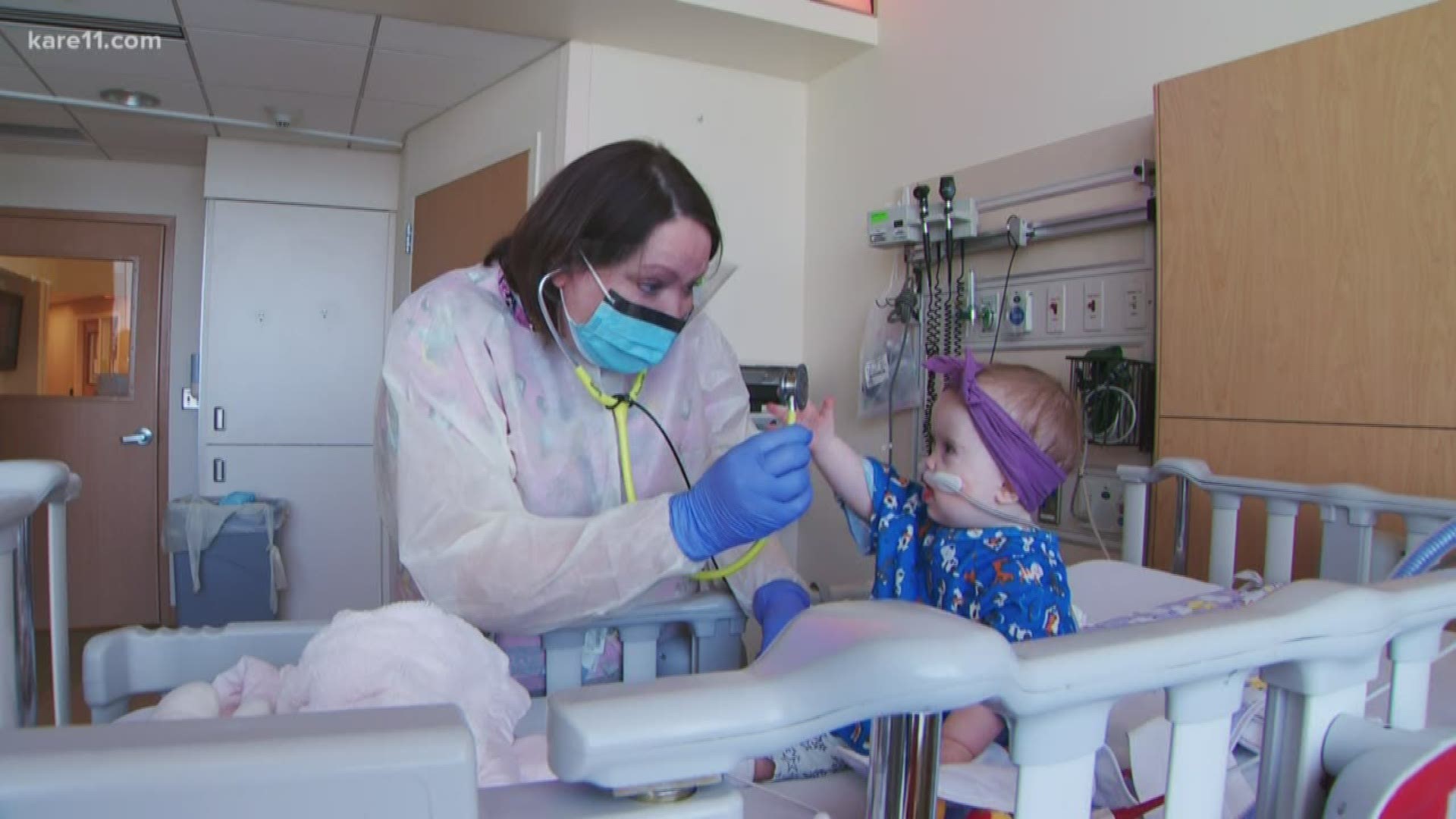 MINNEAPOLIS — Anyone who associates hospitals with sadness, should spend a shift trailing Erika Rucks through the 5th floor of University of Minnesota Masonic Children’s Hospital.

In one room Erika struggles to comfort a crying child, in another she catches a whiff of a messy diaper.

“I just feel like the luckiest person on the planet,” the pediatric oncology nurse says, smiling, in the midst of her shift's challenges.

Lucky is not the term most people would attach to Erika. A survivor of childhood cancer herself, Erika is now in another cancer fight statistics suggest she will not win.

Credit: Chad Nelson, KARE
Erika Rucks gets a hug from a co-worker

“I try not to think about statistics,” Erika says. “I’m going to live each day doing exactly what I love to do.”

Erika was a freshman in high school when cancer first came calling.

Erika kept smiling through chemotherapy, the loss of her hair, and a dozen radiation sessions.

Just a bump in the road, she told herself. "It wasn't an option that anything bad was going to happen to me.".

Her cancer cured, her smile still in place, Erika graduated high school with her class, became Miss East Bethel, and landed at University of Minnesota.

There, inspired by the nurses who had helped cure her cancer, Erika earned a nursing degree of her own.

No one was surprised when Erika wound up specializing in pediatric oncology.

“Seeing the kids and knowing that I share part of their journeys is how I knew where I belonged,” she says.

Erika found her perfect life at home too, with husband Chris and daughters 10-year-old Evalyn, 7-year-old Elizabeth and 4-year-old Sarah.

Credit: Chad Nelson, KARE
A photo hangs on the wall of Erika Rucks and her family.

She had everything she'd dreamed of.

“And then I get devastating news,” Erika says.

“It had spread to the bones in my spine,” Erika says. “It means that it's not curable at this time.”

Those 12 radiation treatments on 15-year-old Erika's chest may have played a role. Much has been learned in recent years about late effects of treatment for childhood cancers.

“We never know 100 percent, but I think it's very likely,” she says. “In trying to save my life then, it gave me an incurable cancer now.”

Erika took stock of her life - her children and her desire to make the most of whatever time she has left.

Then, Erika went back to work.

Credit: Chad Nelson, KARE
Nurse Erika Rucks spends a few minutes with Izzy Bogie, a 15-year-old cancer patient who has stopped to visit the nurses who treated her at U of M Ma

“Even though I can't necessarily cure my own cancer, I'm helping somebody else,” she decided.

Erika also realized in returning to work, she would be helping herself.

“She has a connection,” Jaymie Meade, another U of M Masonic Children’s nurses, says.

Erika doesn’t just have a connection to her patients, but to a support system tied to her work colleagues.

Meade and the other nurses quickly mobilized.

They nominated Erika for a wish granted by the Have a Nice Day Foundation, which is how the amateur photographer found herself on the sideline with a photo pass during a Minnesota Vikings game.

Credit: Chad Nelson, KARE
Nurse Erika Rucks shares a moment with her co-workers at the start of her shift.

The nurses wear t-shirts in support of Erika and held a bake sale that raised enough money to send Erika and her family to Disney World.

“People were opening up their wallets and shoving money in the box,” Meade says. “All we could think about was what can we do, what can we do for her?”

“So, Erika will treasure every moment with her family at home - and the family with which she has chosen to remain at work.

Erika wipes away a tear.  “There's enough love to go around,” she says.

On a recent evening she tracked down blueberries at a hospital breakfast bar for a three-year-old cancer patient who insisted she needed them.

Erika washed off the oatmeal from which she picked the berries and hand delivered them to the girl’s room.

Blueberry hunts aren’t in a nurse's job description, yet they help explain why Erika can't stop coming to work, even with incurable cancer.

Then, Erika smiles, before heading into another young patient’s room.

“That's how I want to be remembered,” she says. “I touched lives.”

PHOTOS: Land of 10,000 Stories: Nurse with incurable cancer stays with her patients

1 / 7
Chad Nelson, KARE
A photo hangs on the wall of Erika Rucks and her family.

RELATED: Officer cites widow for shoplifting, then delivers food to her home