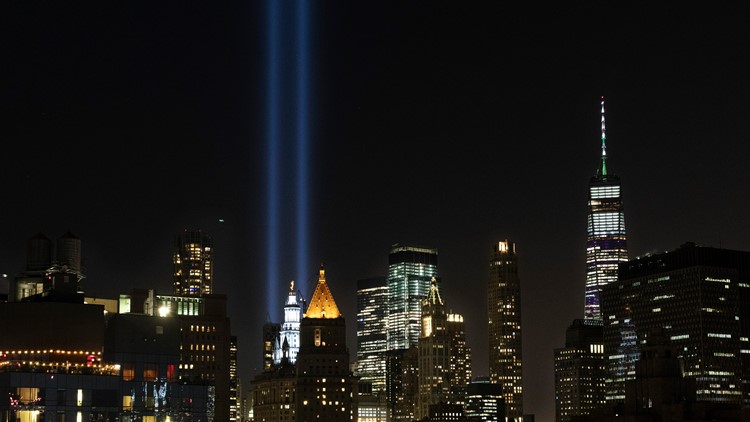 Photo by: AP
The Tribute in Light rises above the lower Manhattan skyline, Tuesday, Sept. 10, 2019 in New York. Wednesday marks the 18th anniversary of the terror attacks against the United States of Sept. 11, 2001. (AP Photo/Mark Lennihan)

On 9/11, Americans encouraged to do acts of good

MINNEAPOLIS — 18 years after the 9/11 terrorist attacks, Americans across the country will take time to mourn and remember the victims killed in New York City, Arlington, Virginia, and Shanksville, Pennsylvania.

Federally recognized as the National Day of Remembrance, September 11 has also become a day for people to perform acts of charity and service in honor of the 9/11 first responders and victims.

9/11 Day, a 501c3 nonprofit, was founded by two friends, David Paine and Jay Winuk. Jay lost his brother Glenn Winuk in the attack. Since 2002, David and Jay have worked to make September 11 a day for service and unity.

According to their website, 9/11 Day has become the nation's largest annual day of charity, with more than 15 million Americans volunteering, supporting charitable organizations and performing good deeds to honor the memories of the victims of 9/11 and terrorist attacks around the world.

RELATED: America to commemorate 9/11 as its aftermath extends and evolves

The organization plans to pack 3 million meals for people in need, with 100,000 of those going to people impacted by the recent storm. 9/11 Day says they'll have 12,000 people in eight cities working to fight hunger.

If you want to help, 9/11 Day is collecting $25 donations to provide meals for Hurricane Dorian victims.

You can also make a difference on 9/11 Day right here in Minnesota. According to Memorial Blood Centers, the local blood supply is dangerously low. To honor 9/11 victims and first responders, they're inviting people to donate blood on Wednesday.

You can donate blood at one of the three locations: