The Secretary of State's office has since responded, calling the claims 'Silly, baseless,' and 'grasping' 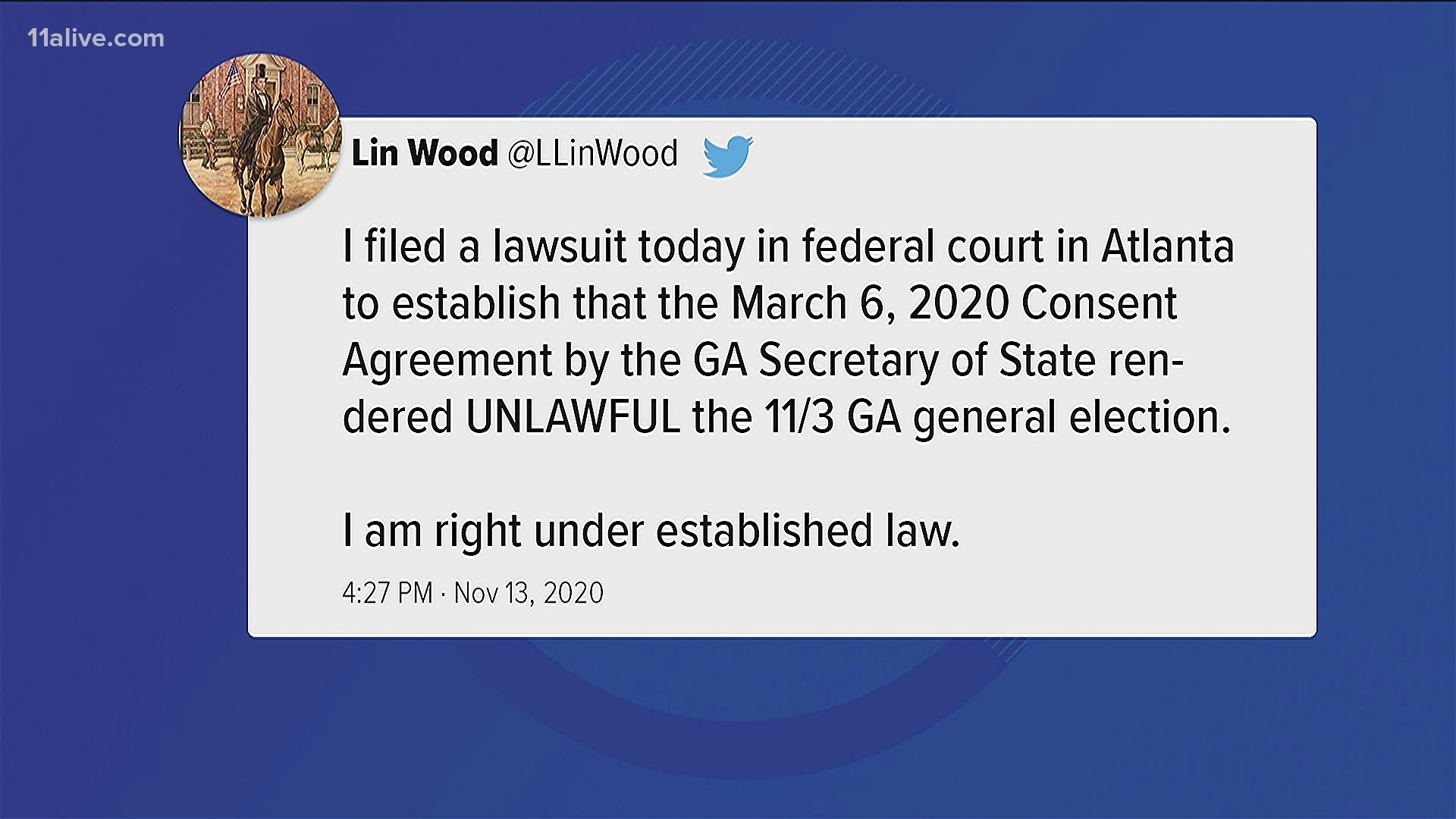 ATLANTA — A well-known Atlanta-based attorney sometimes referred to as the "attorney for the damned" who came into national prominence for defending Richard Jewell, has filed suit against Georgia Secretary of State's Office Brad Raffensperger claiming that, in settling a lawsuit with the Democratic Party, he made unconstitutional changes to election policy.

Attorney L. Lin Wood Jr., under the representation of another attorney, Ray S. Smith, III, suggested that Raffensperger overstepped his bounds when adding new safeguards in the checking of signatures on absentee ballots.

And the result, Wood said, should be that the certification of ballots be placed on hold until the issues are worked out however necessary.

Wood takes primary issue with additions made following a settlement in March, which suggested multiple changes to how Georgia handles absentee ballots - particularly in regard to signature matching.

Under the rules set forth in the settlement, if the registrar or absentee ballot clerk determines that the voter's signature on the mail-in absentee ballot envelope doesn't match signatures on file, that reviewer must seek two others to also view it. Then, a majority of those reviewers must agree that the signature is a mismatch in order for the ballot to be thrown out.

Wood's lawsuit suggests that this additional policy would have to be approved by the legislature and was instead put in place unilaterally by the secretary of state with the approval of only one party.

"Allowing a single party to write rules for reviewing signatures is not 'conducive to the fair...conduct of primaries and elections' or 'consistent with law,' the lawsuit reads.

Wood further suggests that local election offices, already under the pressure of record absentee voting and the addition of online tracking software, would be more likely to miss a bad ballot as they work to complete the process as quickly as possible since the new requirements made the process more difficult.

"The lawsuit describes the new process as "more cumbersome and makes it much more difficult to follow the statute with respect to defective absentee ballots," the lawsuit alleges.

The suit, which was submitted in the U.S. District Court's Northern District of Georgia has not yet been ruled upon by a judge. If Wood's request for relief is granted, it would mean the ballot certification for Georgia would be put off until the issue of handling absentee ballots is handled.

However, on the same day Wood publicly shared the lawsuit online, the Secretary of State's Office responded, calling the accusation a "silly baseless claim."

"Signature match is intact and the General Assembly passed legislation to allow voters who failed to include a signature time to add one," Deputy Secretary of State Jordan Fuchs said. "Fulton County only had one rejected ballot in 2018 and now they have thousands. We strengthened signature match, and will continue to do so, period.”

Wood was first thrust into the national spotlight during his representation of Richard Jewell following the Centennial Olympic Park bombing in 1996.

Following the Jewell case, Wood represented a number of other high-profile figures, including former U.S. Rep. Gary Condit following the 2001 disappearance of intern Chandra Levy, the parents of Jon Benet Ramsey following accusations in a CBS miniseries, the 20-year-old accuser in the 2004 Kobe Bryant sexual assault case, and the late Herman Cain in 2011 while defending against sexual assault allegations.

Through his representation in those cases and others, Wood was dubbed with the nickname "attorney for the damned," by journalist Dan Rather, as mentioned in a Chicago Tribune article in 2004.