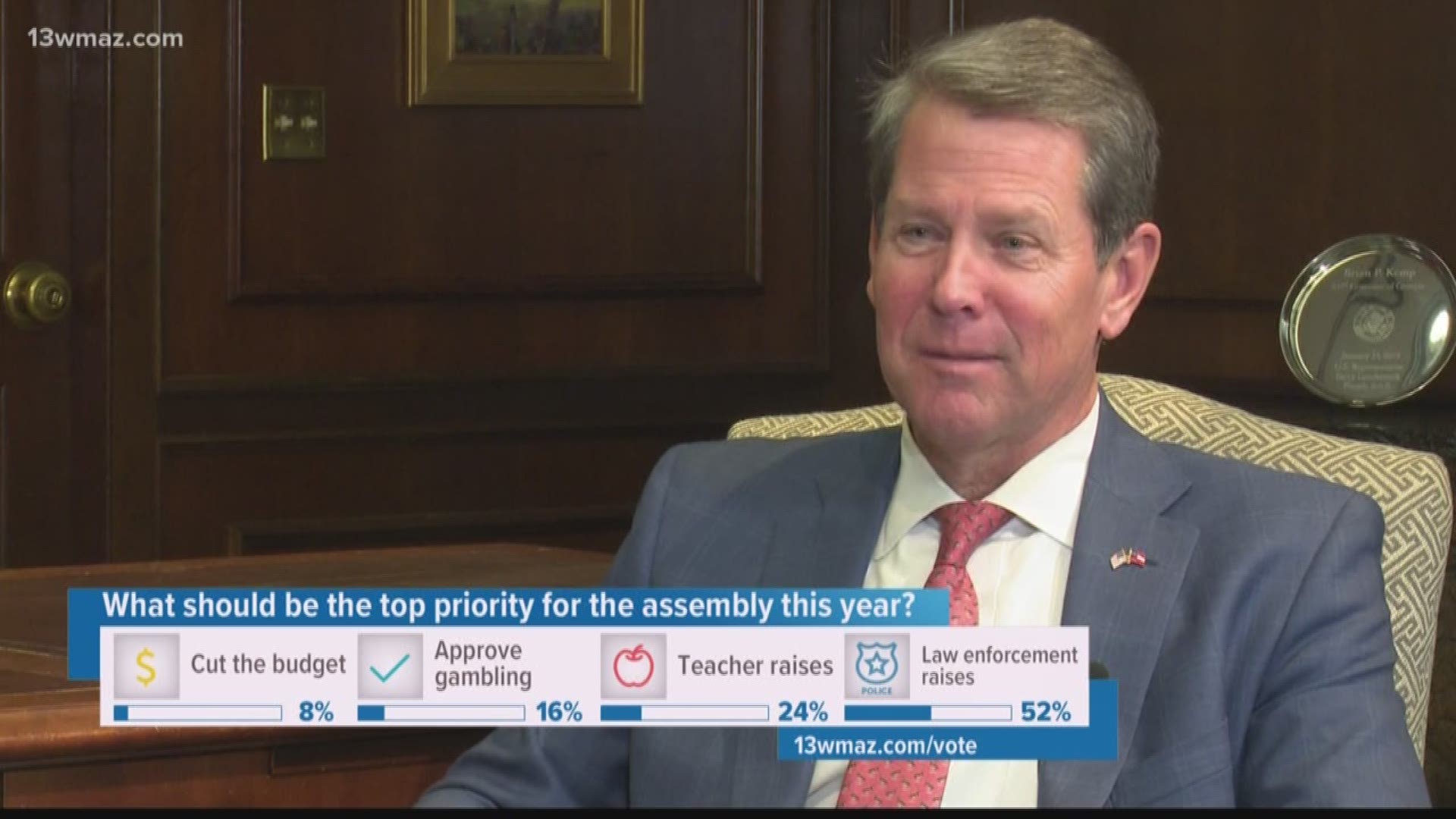 ATLANTA — Monday morning, lawmakers from all over Georgia headed back to Atlanta for the 2020 legislative session.

Governor Brian Kemp was also in attendance, and sat down with 13WMAZ's Chelsea Beimfohr to discuss this year's priorities.

"Well, I’m excited to build off, quite honestly, a great year we had last year. I think we got a lot more done than most people thought coming out of an election year," says Kemp.

After a passing a historic teacher pay raise, launching a new GBI gang task force, and signing the acceptance of medical marijuana into law, Governor Kemp is ready for another year under the gold dome.

"We’re continuing to look at ways that we can go after street gangs and put some more teeth in our laws to help our local prosecutors and law enforcement," says Kemp. "And also to really hone in on sex trafficking, on those that are committing these evil acts, but also, how can we help the victims.”

“We’re using that as an opportunity to streamline state government. To make it more efficient, to use technology to do more with less," says Kemp.

It's something Kemp says he’s familiar with, having helped cut the Secretary of State’s budget 20% during the last recession.

Some way lawmakers are proposing bringing gambling to Georgia to pump money into the Peach State.

"I’ve been opposed to casino gambling," says Kemp. "We just have so many good things going on in our state. It’s not like we need that like other states.”

The legislature is proposing a constitutional amendment, which Kemp says is “veto-proof.” If it passes in the General Assembly, Georgia citizens will decide whether or not to bring slots and table games to the state.

“If it were to pass, I would want to make sure that those revenues are continuing to go to fund the HOPE scholarship," says Kemp.

RELATED: Georgians say they're ready to gamble and would support legislation to do so

Something Georgia already has going for it is the film industry.

Since 2008, Georgia’s film tax credit program has brought hundreds of TV and movie productions to southern soil. It gives companies up to a 30 percent tax break— which is doled out by the state.

As Governor Kemp said Monday, the film industry creates jobs and investments throughout Georgia, but after a new state audit came out last week, could the program see some changes?

That audit claims some of the facts and figures surrounding the Georgia film industry have been exaggerated, and that the state is spending more cash on the film tax credit program than other industries, like the court system and Georgia State Patrol.

Kemp says it’s not necessarily a top priority for 2020.

“There’s a lot of different audits that are out there. We’re digging into those now to see exactly what they’re talking about and making sure that they’re all sound. Then we will work with the legislature on how we move forward with that. I couldn’t tell you if that’s going to happen this year or next year. I don’t think it’s something we need to jerk the rug out of. We’ve got to be very methodical and follow the facts," says Kemp.

Currently, there is no cap on how much film companies can receive as part of this program.

Kemp says he’s undecided about whether or not one should be imposed until he learns more about both sides of the argument.

"We’ve got a lot going on this session, no doubt about it," says Kemp.

RELATED: 'Georgians First:' Hear from Georgia Gov. Brian Kemp on his goals while in office

RELATED: 'My goals are to do what I said:' Governor Brian Kemp on first weeks in office