The Biden campaign has not released much information about the California senator's trip to Georgia. 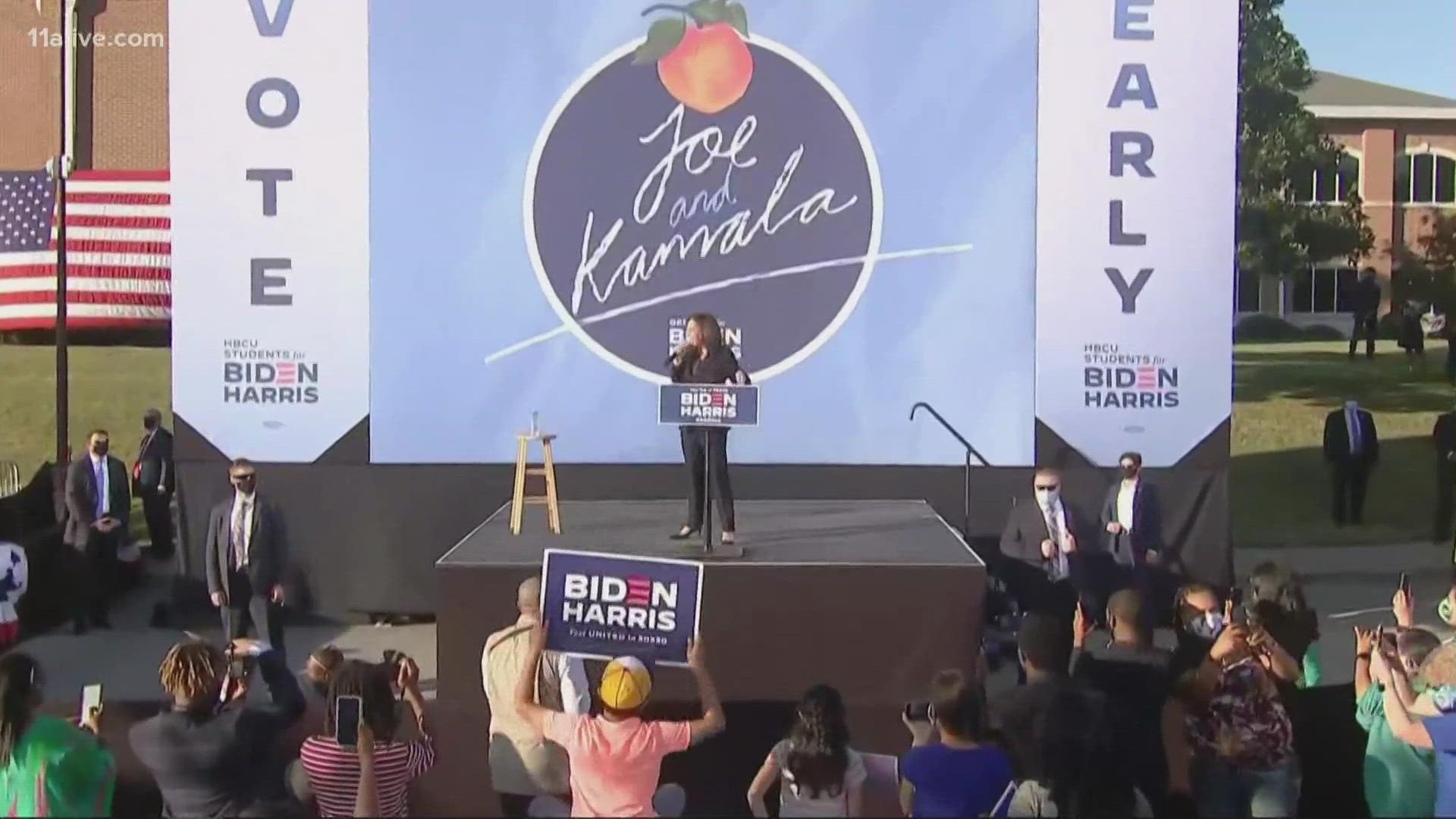 According to the Biden campaign, Harris was here to "urge voters to cast their ballots early ahead of Mandatory Saturday voting in the Peach State."

Before Harris stepped onto the stage for the drive-in rally, other Democratic heavy-hitters - including suddenly-competative US Senate candidates Jon Ossoff and Raphael Warknock - took their moments to energize the crowd, imploring those present to help send them to Congress to flip the chamber from Republican to Democratic control.

Then, Harris took the stage to cheers and loud honks, where she spoke of climate change, racial justice the Supreme Court, noting how there's "so much at stake" and pressing the crowd to orgnaize and get out the vote.

“We need to take back the White House, there's no question about that. We also need to take back the Senate," she said. "We have to, at some point, sit back and think, 'why are they trying to make it so difficult and confusing for us to vote?' And I think the answer is because they know our power.“

That event was scheduled for just at 5 p.m. You can re-watch the event below.

Harris' visit comes amid a major surge at the polls during the advance voting period in Georgia. According to figures from the Secretary of State's Office, more than 2.3 million votes have been cast through early in-person voting or through mail-in voting so far.

Representatives for Perdue, who, himself is embroiled in a hotly-contested race for re-election, said the senator "didn't mean anything by it."

Harris' visit will also follow on other recent high-profile visits to Georgia by the Biden campaign - including one by her husband, Douglas Emhoff, earlier this week.

The metro has been a hub of national political activity ahead of the November election, with frequent visits by President Trump's campaign in recent weeks as well, including from the president himself.

Vice President Mike Pence, Attorney General William Barr, the president's daughter Ivanka Trump and his son Donald Trump, Jr. are among those who have made visits, as well.

Harris said Atlanta - and the state - matter "because Atlanta represents so much about who we are as Americans" she said during the speech.

"Atlanta is a place that has produced leaders who have been national leaders and international leaders, who have always understood that hope will fuel the fight, faith will be what grounds us in knowing what is possible, but then you got to just organize the folks and bring people together and recognize that nothing we have ever achieved as a nation by way of progress came without a fight," she said.

Georgia is increasingly seen as a battleground state this year, with Democrats eyeing a chance to flip its electoral votes for president as well as two competitive Senate races and Republicans working to keep a long-reliable conservative stronghold.