A Coweta County School Board member is facing calls to resign, after posting on social media of her apparent visit to D.C. last week. 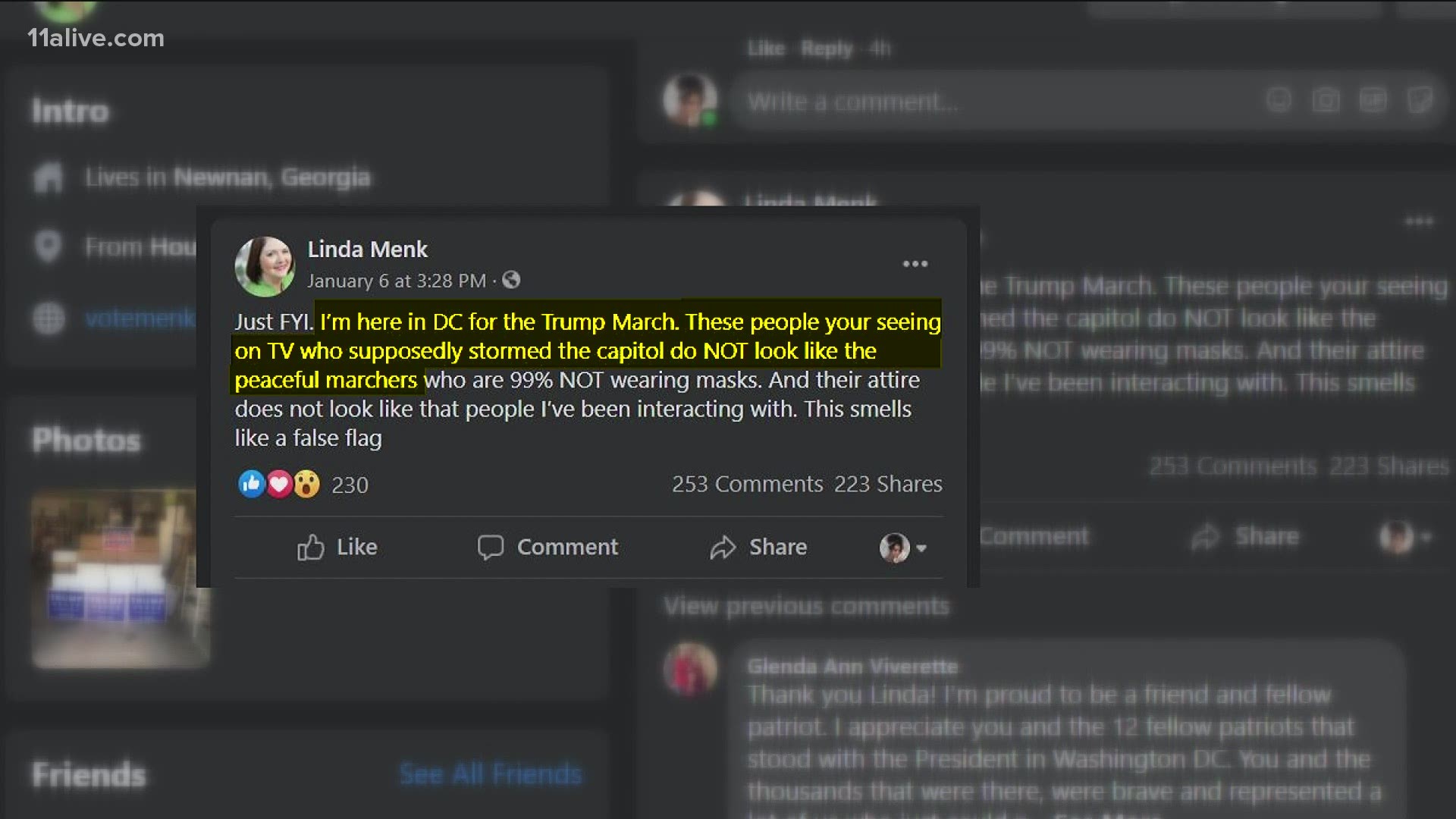 NEWNAN, Ga. — Six days after violence erupted at the U.S. Capitol, community members in Coweta County are calling for the removal of a school board member.

Citizens for Positive Reform started a petition, calling for Linda Menk to be removed from the board.

"On January 6, Ms. Linda Menk, a Member of the Coweta County Board of Education, was in attendance at the Pro-Trump rally in Washington D.C., which ultimately turned into an insurrectionist mob storming the Capitol Building," the petition reads in part.

"As a member of the Coweta County Board of Education, she is not only entrusted with the education of our children, but also expected to be a pillar of the community as well to uphold the values of the education system she helps oversee.  As a community, we feel that she does not represent the values of this body, our community, or our democracy," the petition says.

Posts on a Facebook page seemingly belonging to Menk, point to her participation in the Pro-Trump rally that took place on Jan. 6. The page, which includes the header "currently serving as elected Coweta County Board of Education representative for District 4," includes a post from the day of.

"Just FYI. I'm here in DC for the Trump March. These people you're seeing on TV who supposedly stormed the capitol do NOT look like the peaceful marchers who are 99% NOT wearing masks," the post reads. "And their attire does not look like that  people I've been interacting with. This smells like a false flag," the post reads.

A subsequent posts reads discuss the "incredibly PEACEFUL rally in DC," as well as accusing the mainstream media "of deceiving the American people."

Stacey Bristow, CEO of Enhancing Lives in Today’s Era Youth Organization (the parent LLC of Citizens for Positive Reform) told 11Alive, "It was important for the task force to bring awareness to the community and start a petition and denounce these behaviors and demand that she is terminated from her position."

Bristow said the group is not accusing Menk of actively participating in any violence that took place at the Capitol. (None of the posts on Menk's page point to her doing anything other than attending the rally.)

However, Bristow said community members take issue with "the presence, being there on the steps and then posting and encouraging. That is something a board member should not do."

In one post, a comparison is made between "BLM riots" and the "Capitol riot"; alluding to the "lack of outrage" over "left-wing violence."

The Facebook page also includes posts alleging Antifa protestors were a part of the Capitol riot as well as supporting President Donald Trump's calls to Georgia asking to look into election fraud.

It's important to note that there have been numerous claims of Antifa's involvement, but the allegations have not proved to be credible.

During a school board meeting Tuesday night, at least nine community members called for her resignation or censure.

"I have difficulty believing she was just in Capitol Hill to hear the loser of the last election speak," said Joshua. "Perhaps she thinks the Proud Boys have a reason to be proud and the Confederate Flags that were carried by the good ole' boys never meant any harm."

Eve Olsen said, "I would like her to undergo an investigation for censure."

The head of the NAACP for Coweta County, Cynthia Finney also added her voice to the calls for resignation.

"We are deeply disturbed by the knowledge that a member of our school board, Ms. Linda Menk, neglected her duties to the students of Coweta County to be a part of a rally that lead to a violent and deadly insurrection at Capitol Hill."

Menk had supporters in the meeting; two people who said they were present at the rally as well and maintained the rally was peaceful.

"We had no part in that, had no idea, and none of the 250,000 people that were there were like that," Jan Horn in response to people accusing Menk of being a party to the violence.

"Ms. Menk attended a rally. You think as a board member she gives up her first amendment rights or any rights. That is ludicrous and ridiculous," defended Ben Parsons. "These attacks are shameful and ridiculous and people should know better."

She responded to calls for her resignation during the meeting.

“The best way to take control over a people and control them utterly is to take a little of their freedom at a time, to erode rights by a thousand tiny and almost imperceptible reductions. In this way, the people will not see those rights and freedoms being removed until past the point at which these changes cannot be reversed," Menk read.

She ended her comments stating she went to the rally in honor of military members of her family who died serving the country or who are currently serving.

"I don't apologize for it," Menk told the room. "I participated in a very peaceful rally in support of your protection, the protection of your right to vote and to have your voice and your vote count."

School board Amy Dees was the only member to directly address the concerns. She reminded board members still have first amendment rights, but added, "But as an elected official, there are consequences for what we post and say."

Dees asked Superintendent Evan Horton to investigate. Horton said he would ask the board's attorney for an opinion on the matter.

This is the second time Bristow's group created a petition demanding the removal of Menk. In 2020, a petition circulated after what Bristow called "derogatory statements on her Facebook page as it relates to the Black and brown community."

A search of her page shows posts, such as ones dated from August, show support of Kyle Rittenhouse, the 17-year-old accused of shooting three protestors in Kenosha on August 25. Two people died as a result.

There's a petition calling for the removal of a Coweta County School Board member, who claims she was at the Capitol on January 6th. These are some posts from her social media which people in the community say are "questionable" given her position. 1of 2... #11Alive pic.twitter.com/Ae5KRPzTpr

Credit: Coweta County School System website
Linda Menk, who is sitting on the front row in the last seat on the right, is photographed with other Coweta County Board of Education members. The photo graph is listed on the school system's website.

Menk has been a member of the board since 2014.

In an article posted by the Newnan Times-Herald in 2018, a statement attributed to Menk reads, "Volunteering to support the protection of our Constitution and keeping the federal government in check within the scope of their enumerated powers is just one small way I can give back to Coweta, Georgia and our great nation."

11Alive emailed Menk, asking for response to calls for her removal and to any allegations lobbied her way. On Wednesday, she told us what she witnessed was peaceful "courteous behavior by the attendees at my hotel on M Street and in front of the Washington Monument."

"I was not at the Capitol nor was I anywhere near the Capital so I cannot speak to something I did not personally witness," the email said.

Menk said based on where she was, she never heard anyone say anything about "doing anything other than supporting the right of every legal vote to be counted."

To watch the full exchange between Menk, supporters, and those calling for her resignation, click here.