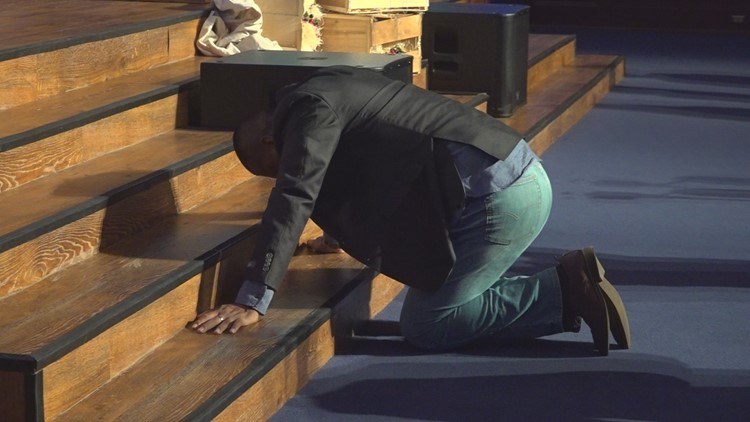 COLUMBIA, S.C. — The Columbia community came together at Rosewood Church on Friday night for a prayer service for a Columbia church that was robbed last Sunday.

While members of Centro Cristian de Columbia Church were worshiping on Sunday, police say a gunman went inside the church, fired multiple shots, and stole wallets from the congregation.

Pastor Henry Alfaro says his church family has been looking to God during this time.

“(Translated from Spanish) … Well it’s been a very difficult week. It’s been a lot of things like fear, anger, and just a lot of things in our hearts. But at the end of the day, we’re always going looking for God for our peace,” said Alfaro.

Alfaro and his church family have been trying to work through the pain.

“There’s been two things that’s been difficult. One of the times that’s been difficult is looking at being at the hospital. It’s hard because he was in a very critical stage and just realizing that he was just praying,” said Alfaro. “The second thing is the fear that we all have that went through this experience. We know that the person who did this crime is out in the streets and we’re just not safe in our homes or anywhere.”

One of their own church members, Esvin Perez, was shot by the suspect, according to police. Initially, he was in critical condition.

Law enforcement continues to search for the suspect.

On Friday night, people gather inside the sanctuary at Rosewood Church to pray and support the Centro Cristian de Columbia Church. Before the service, members of the church met together as a whole with law enforcement to talk about what's been on their minds and pray with one another.

Pastor Bob Morgan with Rosewood Baptist Church says they wanted to open their doors for their family.

“We love each other like family,” said Morgan. “What we’re doing right now isn’t something new. It’s exactly what the Bible says we’re supposed to do. When one person’s hurting, we’re all hurting, and we can help each other through it.”

A band and the community sang and worshiped together to lift each other up. Members of the congregation gave testimonies as well.

Morgan says Alfaro is an incredible man of God. Both their churches partnered together. His heart sunk when he found out the news on Sunday.

“My stomach hit my feet. We reached out and we started praying at that point,” said Morgan. “We ran to the aid of family and that’s what we’re about.”

Morgan explained,  “We knew we were going to have to reach out to people who are different than we are because the world is different than our backyard and we need to be able to reach out. That’s what we did when we partnered with Centro Cristian de Columbia.”

While it’s been a tragic situation, Alfaro explains it hasn’t shaken the church’s faith.

“Of course, this is the answer of God and the community over the evilness. The feeling of my family is just to unite in this moment. All of the community has responded to us in a marvelous way. We have invocated all of the pastors from the area so we can pray together and just unite because God is still working. It was just a small battle but the Lord is the King of the city,” said Alfaro.

It’s been a tough situation, but Alfaro says he knows who’s in control.

“In a way, I feel like God is just letting us now that He is in control. It’s just been a thought that the enemy wanted to do more things that were bad but he wasn’t able to," said Alfaro. The Bible says that everything works good for those who love God. That’s where we see Jesus dying on the cross. That was a tragedy but then that brought that many of us could be saved and be able to enter the Kingdom of God.”

Alfaro says it makes a difference when a community can come together, especially when they need their support the most.

“It’s mostly to let the community know that we are not afraid of the things that are happening. There are more of the good things that happen in the world than the bad things. This will bring us more together, more united and just more love,” said Alfaro. “I would like to invite people to unite, to not stop assisting the churches, that God is still doing things in people. The person who did this crime, we have forgave him. We want God to save his soul.”