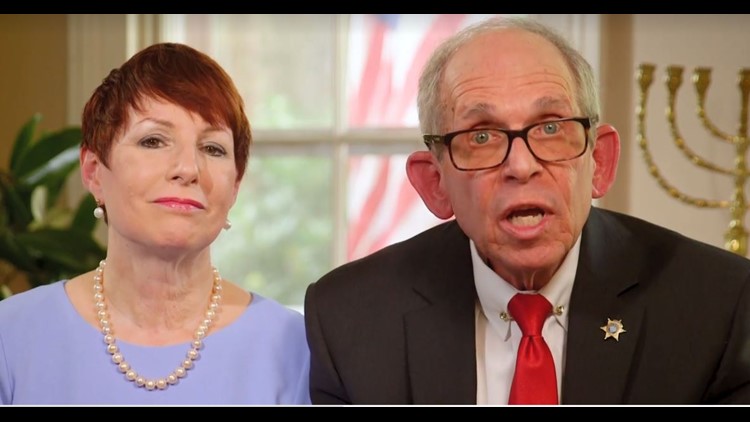 'Workhorse, not a showhorse': Schlesinger kicks off campaign for Bibb mayor

Calling himself a "bridge builder" and "a workhorse, not a showhorse," Larry Schlesinger has released a video formally announcing that he's running for Macon-Bibb mayor in 2020.

That announcement comes more than a year after he began raising money for next year's race.

His seven-minute video does not name Mayor Robert Reichert, who cannot run for a third term, or lawyer and school board chairman Lester Miller, who's also in the race.

But Schlesinger appears to throw plenty of shade at the current mayor.

"Over the past two decades," he says, "there have been just too many times when the mayor's office has left us disappointed and dismayed." (That two-decade window covers both Reichert's 12 years as mayor and his predecessor, C. Jack Ellis.)

Too many times, he says, the approach by the "chief executive" is to "draw battle lines, manipulate the process and quash dissenting opinions."

He urged Macon-Bibb voters to demand more: "More transparency. More consultation. More careful planning. More supervision of our finances rather than tax increases every year. And more empathy toward the many different personal and family circumstances that play out each and every day in this county."

He said the county "deserves a mayor who's virtuous and principled, fiscally responsible, bent on presenting a bona fide balanced budget every year... A mayor who is neither hesitant nor afraid to call out or blow the whistle on anyone."

Among other issues, Schlesinger also voiced support for public schools and promised to help fight "the plague of poverty."

Politics aside, Schlesinger praised his wife Darrie, their two daughters and two grandchildren, highlighted his 40 years as a rabbi, displayed his love of Bob Dylan and noted his own musical performances with "Rabbi and Friends."

Schlesinger was rabbi of Temple Beth Israel for 20 years and is now rabbi emeritus.

He joined the Macon City Council in 2007 and then was elected to the Bibb County Commission when city and county merged in 2014.

"Macon Bibb deserves a servant leader as mayor, someone who always puts the community's needs above his or her own," Schlesinger said.

"Someone who is a workhorse, not a showhorse. I am that servant leader."

Schlesinger announced that he was running for mayor in 2020 through a Facebook post in February 2018 and immediately formed a committee to raise money for the race.

Miller announced even sooner, in January 2018.

Two other candidates, Chatavia Ane'qua Callaway and Verbin Weaver, have also filed paperwork with the county board of elections to run for mayor. But so far neither has reported raising or spending any money.