VERIFY: No, the mandatory quarantine flyer is not legit

Georgia National Guard tweeted that it was not true back in April, and it's still not true now 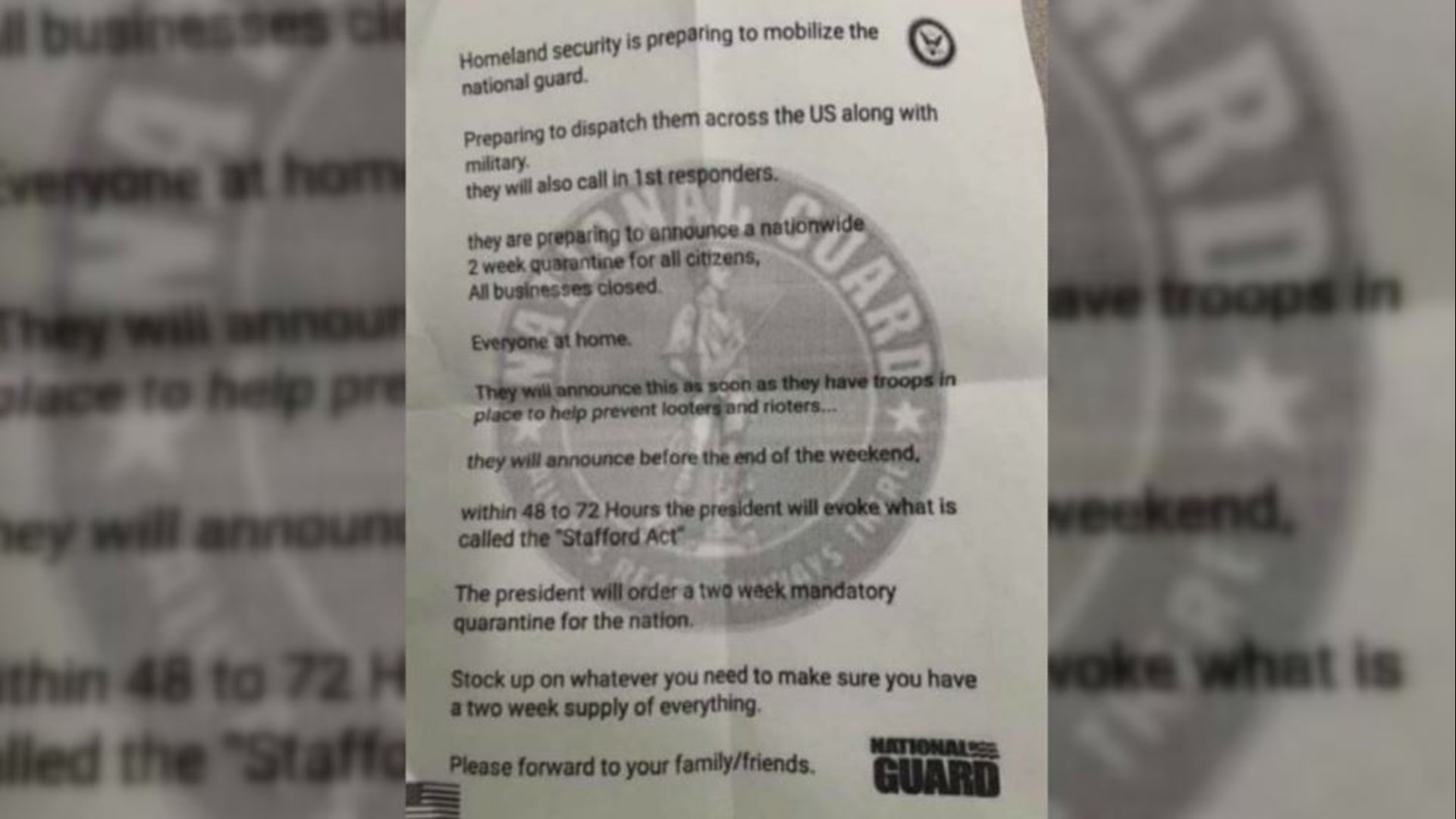 MACON, Ga. — A flyer has been circulating around Central Georgia and online about the president evoking a federal law to order a two-week mandatory quarantine. It even has the National Guard's logo on it.

This flyer has started circulating yet again. First, we saw it back around April of last year. Now, we're seeing it again, but is it real? We set out to verify.

The flyer claims that the Department of Homeland Security is mobilizing the National Guard. It says the president will use the "Stafford Act" and will order a two-week mandatory quarantine for the whole country. The flyer says that means all businesses will be closed.

The letter also claims that the military and first responders will join Guard members to protect against looters and rioters. It encourages people to stay home and "stock up" on essential items to last them two weeks, but all of that isn't necessary because this flyer is FALSE.

The Georgia National Guard tweeted that that letter circulating is a hoax, saying it was false in April, and it's still false now.

"As you said, it's been going on since March or April, so we're almost back at March and April again. Nobody has seen Humvees, making them stay in the house. None of us in uniforms are standing out here pointing at people, saying 'You got to put your mask on, we're going to arrest you.' None of those things have happened. I'll tell you in the same way they said almost a year ago when it didn't happen, they are saying it again, it's not going to happen," said Lt. Col. Pervis Brown with the Georgia National Guard.

The same flyer is also going around the country this week. On Tuesday, the Ohio, West Virginia, Oklahoma, and Texas national guards reiterated the letter is fake, and even if this claim was true, the Stafford Act itself makes no mention of a national quarantine, shutdown, or lockdown. Our National Verify Team confirmed that back in March. The act is geared towards disaster relief.

Another fun fact about the Stafford Act is that it's used fairly often. According to a 2017 Congressional Research Service report, it's used nearly 36 times a year. President Trump approved emergency declarations under the Title V of the Stafford Act most recently after the Nashville Bombing on Christmas Day and again this week in D.C. after the Capitol Attack for safety during President-Elect Joe Biden's inauguration.

Georgia National Guard added in their tweet to be sure to always get your news from trusted sources and not to believe everything you see on the internet.