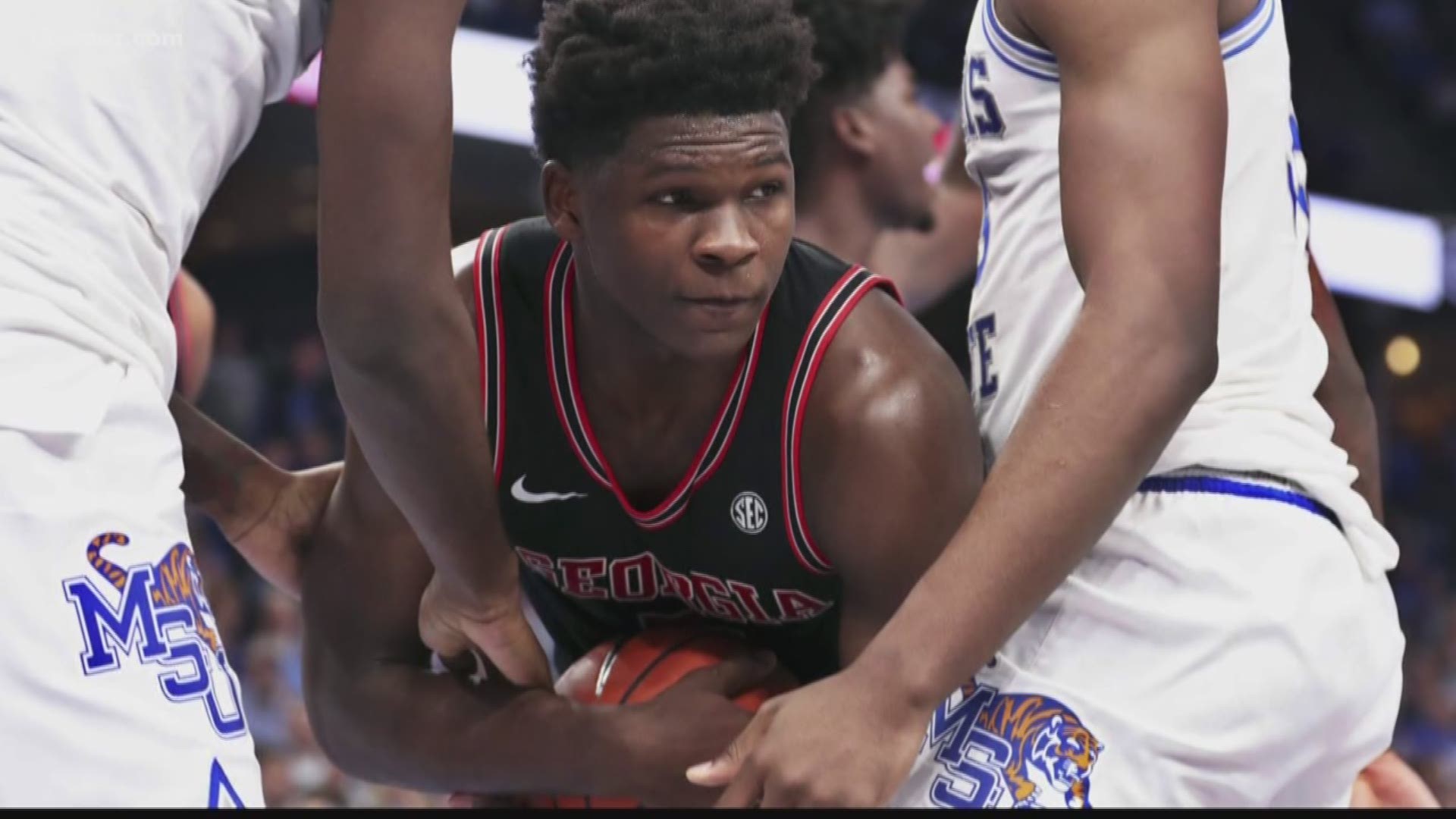 ATHENS, Ga. — The Georgia Bulldogs men’s basketball team is making headlines across the state thanks to 5-star recruit and arguably number one pro prospect in freshman Anthony Edwards who has a Middle Georgia State connection and the Knights basketball team.

In Cochran, just over 100 miles away from Athens, the Middle Georgia State Knights are preparing for a mid-week road trip to Florida College.

But one of these Knights working hard on the floor has a date in Stegemen Coliseum on his off night to cheer on Georgia’s freshman sensation Anthony Edwards, but to him, he’s not just a fan -- he’s big brother Antony, who always knew the prodigy known as "Ant Man" had the talent.

“It was like my 10th grade summer, so he’s was in his 7th grade year, and he would come home and say, 'I can dunk, I can dunk,'” Edwards explains. “And I would say, 'Get out of here,' then he would throw his own alley-oop dunks and I was like, 'Wow, that’s crazy.' His handles started getting better, working on his shot every day, so I knew he would be a great basketball player someday. It would just be a matter of time.”

The younger Edwards is averaging better than 18 points with 5 rebounds and 3 assists per game for the Dawgs, while the elder Edwards, starting for head coach Scottie Moe, is bringing home 16 points, 6 rebounds, and 3 assists every contest. It's something they discuss via text and FaceTime on the cellphone.

“Especially after games and stuff, like when he has a bad game, he calls and talks to me. If I have a bad game, I call and talk to him,” says Edwards. “We really have a lot to talk about because it’s his first year of college, too, so he’s going through a lot of new stuff, and then he has a target on his back being one of the best players in the nation.”

As both Edwards brothers work to get better, big brother Antony says he still a slight advantage over his kid brother Anthony, but not by much.

“Yeah, I can still beat him,“ explains Edwards. “But it's good competition. He gets really competitive when he loses. He wants to play over and over again 'til he wins, so it gets real competitive every time we see each other.”

Both brothers are wearing number 5 this season, and they only had a chance to play together for a year at Therrell High School because they are three years apart.

If you want to see “Ant Man“ in action, he and the UGA Bulldogs host Kentucky Tuesday at 9 p.m.

If you want to catch Antony and Middle Georgia, their next home game at Morris Gymnasium in Cochran will be held on January 25th.