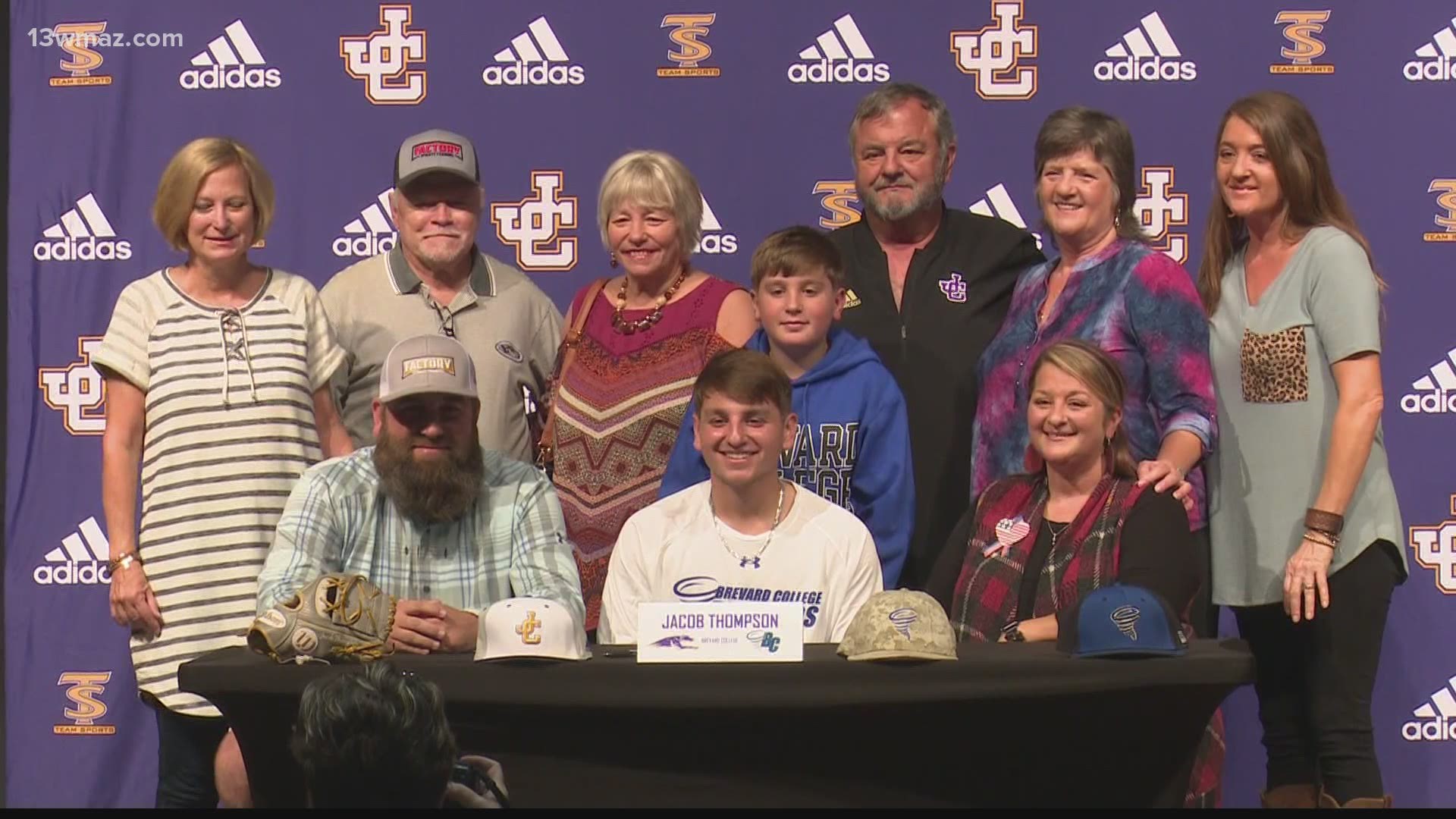 Westside High School's Kowacie Reeves Jr, the 6-foot-6 point guard, signed his national letter of intent with the Florida Gators. Kowacie has an amazing stat of 187 career 3's along with nearly 1,300 career points. Last season, the 4-star talent averaged 21 points, 7 rebounds, and 2 steals per game and also was touted as Co-Region Player of the Year, all with a 3.95 GPA.

"It's good to reflect back on my career as a whole and I'm glad I was able to get noticed and to get notoriety, but when it came to work, it wasn't easy," Reeves said.

Jones County High School's Jacob Thompson is also all smiles. The senior pitcher signed a scholarship with Brevard College. Earlier this year in a COVID-19-shortened baseball season for the Greyhounds, Jacob had roughly 30 innings pitched with 30 strikeouts to 9 walks coupled with an impressive 1.32 ERA, and a record of 2 wins and 2 losses.

West Laurens High School diamond standout Bradley Wilson signed a national letter of intent to play baseball over the next few years in Starkville, home of the Mississippi State Bulldogs. In 2018, Bradley hit for .305 and had 4 wins on the mound, with a 1.6 ERA and before the coronavirus took over, he was batting .409 and had 12 Ks in 12 innings with a 1.13 ERA his junior campaign. Bradley is also the Raiders starting quarterback.

Heartily Nepveux is heading to Piedmont College. Heartily was a defensive leader in the outfield as well as an all-region-caliber player during her career with a 325 OBP.

Heartily's twin sister Chloe Nepveux will attend Palm Beach Atlantic University. Chloe was also all-region all the time with a 2.73 career ERA as a pitcher and she also played first base, all region all years.

Pitcher Jordyn Partain will be a Panther with Florida International University. The senior finished with more than 600 strikeouts,  a former Region 7A Softball Player of the Year, as well as all-region and all-state multiple times.

Henderson Hurdle will continue to play shortstop in Americus for Georgia Southwestern State University. Hurdle had the highest batting average of 488 as leadoff and was the Area 1 Player of the Year.

It was a happy day at Tattnall Square Academy where Grace Hiller signed a scholarship to play softball with the Clemson Tigers. Hiller played for her father Joey at Tattnall. Her path to Clemson was not an easy one. She overcame two ACL injuries which wiped out her entire sophomore season and most of her junior year. Hiller was an All-State performer at Tattnall, batting over 460 during her time in the Blue-and-Gold. She hit over 500 with runners in scoring position and holds the school record for highest batting average in a season. Grace Hiller actually committed to play at Clemson when she was in the ninth grade.

At Mary Persons High School, Katelyn Shipman is taking her ball and glove to Gordon State. The senior helped the Lady Bulldogs achieve a 19-13 record in her sophomore season as region runners-up. She plans to play right field for the Highlanders after she graduates from Mary Persons.

Fellow classmate Justin Wachtel will be running cross country at the University of Virginia. He placed third place at state as a freshman, and second in state as a sophomore, then dominated GHSA cross country with back-to-back first place finishes to be named 3A and 4A champion.

Congratulations to our athletes!