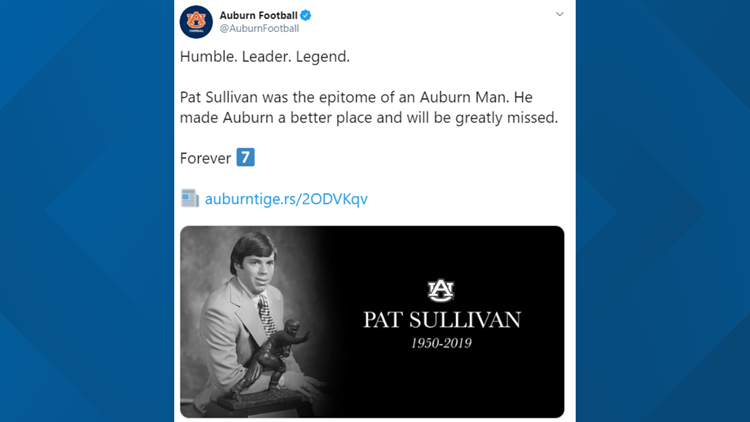 BIRMINGHAM, Ala. — Pat Sullivan, a former TCU and Samford head coach who won the 1971 Heisman Trophy as a quarterback at Auburn, has died. He was 69.

Sullivan's family released a statement saying he "died peacefully at home" Sunday morning, surrounded by relatives. Sullivan had been diagnosed with throat cancer in 2003 and the statement said he "fought a long and difficult battle as a result of his treatments."

Sullivan was a College Football Hall of Famer who played four seasons with the NFL's Atlanta Falcons. He began coaching at Samford in 2007 and stepped down in December 2014, citing health issues and saying his life needed "more balance."

He was TCU's head coach from 1992-97 and then worked as UAB's offensive coordinator before taking over at Samford. Sullivan was inducted into the Hall of Fame as a player in 1991.

He entered the Alabama Sports Hall of Fame in 1981.

No. 4 Georgia closes regular season with 52-7 rout of Tech