College players who used to appear on Football Friday Nights could find themselves playing on Sundays this week. 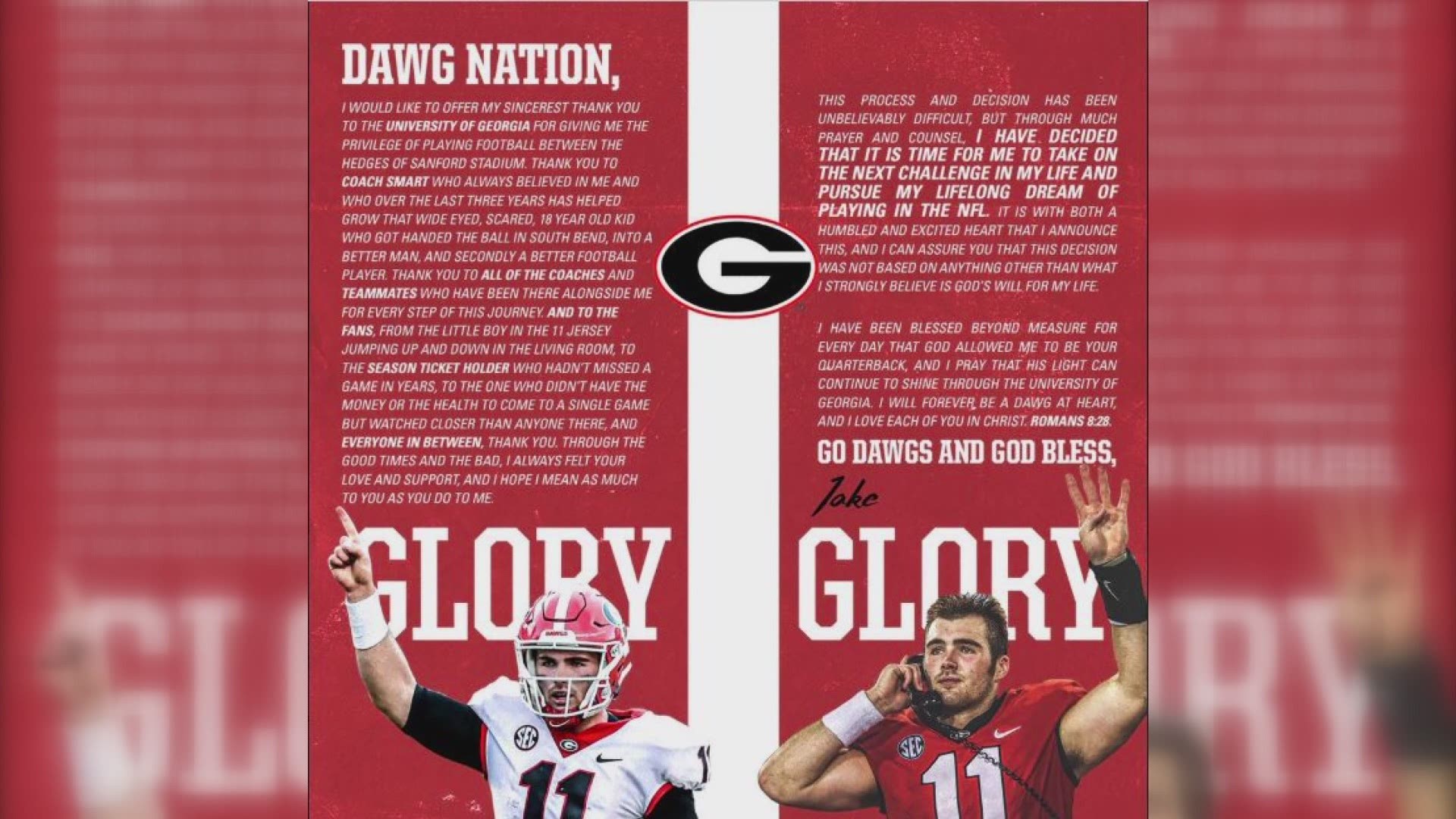 The 2020 NFL Draft is sure to be a historic one. The draft was supposed to be held in Las Vegas this year, but has been made a virtual one now due to complications from COVID-19.

Still, several players could from Central Georgia could find themselves on NFL teams by the end of the week. Even more could end up on a roster via free agency.

The most recognized Central Georgian in this draft is Georgia quarterback and Houston County High graduate Jake Fromm.

Fromm left the Dawgs a year early with a 35-7 record as a starter, a national championship appearance and a Sugar Bowl win. He ranks in the top 5 for Georgia passing yards, touchdowns, completions and attempts.

Scouts have doubts about his arm strength, but are big on his football intelligence and accuracy. He's projected to be drafted somewhere between the late second and the fourth round.

Harrison Bryant is another Central Georgia talent that could have his name called in one of the earlier rounds of the draft. Bryant is a John Milledge Academy grad who made a name for himself at Florida Atlantic University. As a senior, he won the John Mackey Award as the best tight end in the country and posted 148 receptions for 2,137 yards and 16 touchdowns. He's also projected to land between the second and fourth rounds of the draft.

Warner Robins might recognize this name - Marquez Callaway. Callaway is a Demons grad that's been making noise up on Rocky Top with the Tennessee Volunteers. Callaway is a receiver but may get more attention as a return specialist. While at Tennessee, he was named ALL-SEC second team as a return man in 2019 and his 1,646  receiving yards is 16th all-time at UT.

Quintez Cephus is a wider receiver out of the University of Wisconsin. He played his high school ball at Stratford Academy. As a senior, Cephus led the Badgers in receptions (59), reception yards (901) and receiving touchdowns (7). He was a Big 10 All-Conference honorable mention in 2019.

Derrick Evans Jr is a quarterback out of Central High School. He took his talents to Carson-Newman University and is hoping his ability to play multiple positions is an asset to a NFL Team. While at Carson Newman, he was a three time All-South Atlantic Conference second team selection and led the conference in touchdowns his senior year.

Will Coneway played linebacker for the Washington County Golden Hawks and took his talents to Mercer University. Coneway led the Bears with 94 tackles his junior year and had 59 tackles in seven games before injury his senior year. He's the 5th Bear in Mercer history with 200-plus career tackles.

Reggie Gantt is a defensive back out of Stetson University. He collected 128 total tackles, 10 pass deflections and 3 interceptions while a Hatter. As a senior, he was invited to the 2020 Spiral Tropical Bowl. Gantt played high school ball at First Presbyterian Day School.

RELATED: Virus shutdowns will likely make NFL draft most bet on ever