Love and football: The life of a coach’s wife

13WMAZ sat down with five Central Georgia coach's wives and asked them questions about their relationships, football, and why they love being married to a coach 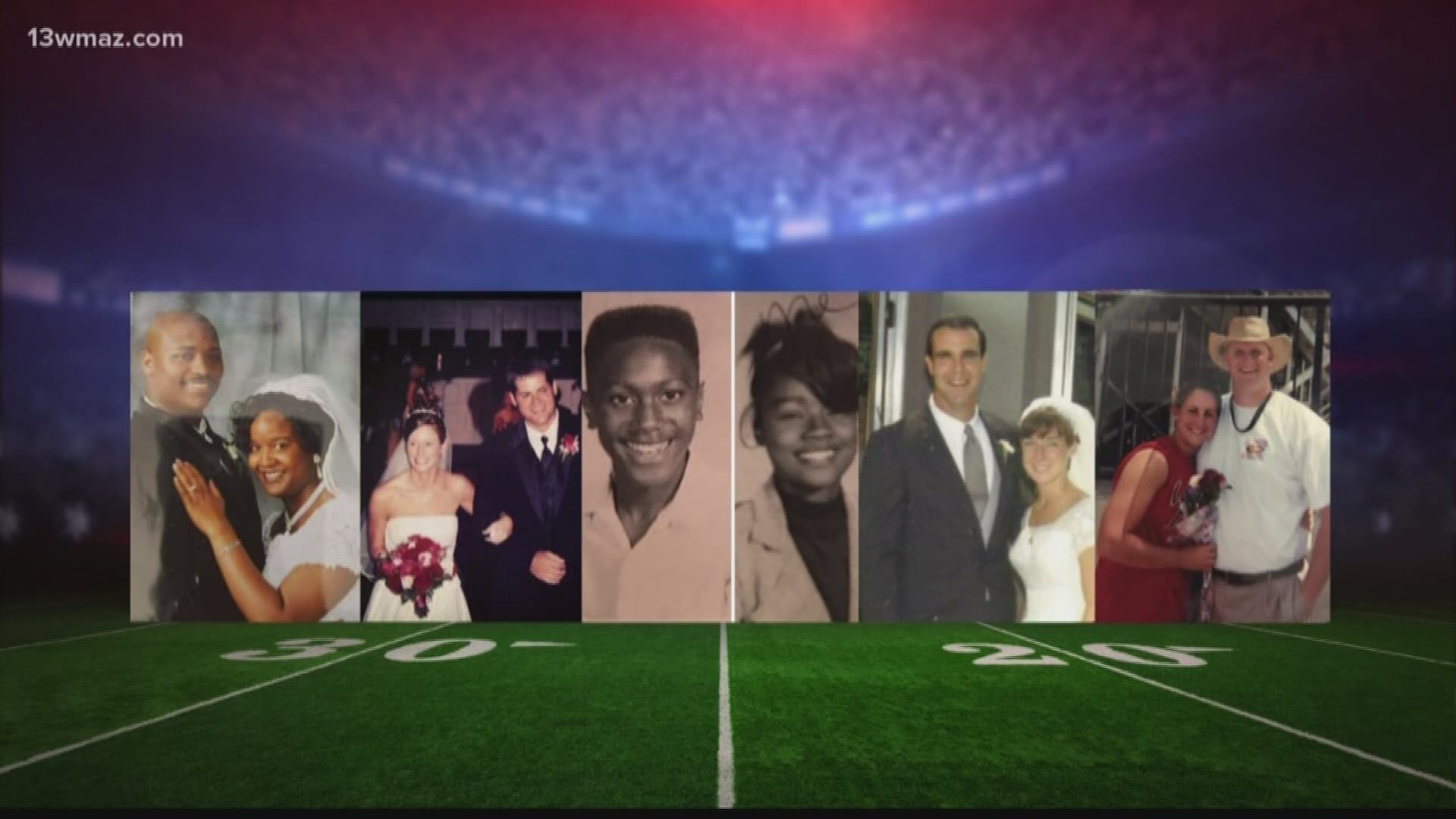 Carrie Chastain is married to Jones County head football coach Mike Chastain. They met at Northside High School and have been married 16 years.

Ebon Hicks is married to Baldwin head football coach Jesse Hicks. They met in in the sixth grade, but did not start dating until high school in Augusta, Georgia. They have been married for 20 years.

Ellie Farriba is married to Stratford Academy head football coach Mark Farriba. They grew up as neighbors, and started dating after Ellie graduated high school and have been married for 33 years.

Demetria Risper is married to Westside head football coach Sheddrick Risper. They met in the fourth grade and have been married 20 years.

We quizzed these wives on their football knowledge. Here are their responses!

Q: How many points is a touchdown worth?

Angela Crawford: “Thank God, I know this one. Six points.”

Q: How many minutes are there in a quarter?

Q: What is the sign officials make when there is a safety?

Carrie Chastain: “This one?” as she laughs and then puts up a thumbs down sign.

Ellie Farriba: throws hands up, then gives up and says, “I don’t know.”

Ebon Hicks: chuckles and says “I’m not quite sure, I don’t know that one.”

Demetria Risper: laughs and says, “OK, I don’t know that one.” She says she did know what holding was.

Angela Crawford: “I think it is this,” she says as she claps hands her hands together and makes the correct motion. “Amen! I’m doing a good job, that’s what I’m talking about!”

What number did your husband have in college and in high school?

BONUS QUESTION: Give me the best impersonation of your husband on the football field.

Ellie Farriba: (cracks up as she reads the question, and then stands up and gives the camera a cold, hard death stare.)

Carrie Chastain: “Hands behind his back, and that’s it!” (begins to laugh as she puts her hands behind her back)

Demetria Risper: “I don’t think I can do it. (I tell her she has to try and do something). She starts laughing and then delivers. “He’s like, 'get off the field!' (Now she is cracking up.) 'What are you doing?'.”

Angela Crawford: “He blows his whistle (she whistles). “And goes, ‘let’s go, on the move! What are we doing?'.” (she starts laughing).

Then we asked about their role as a coach’s wife, specifically what is it like to support them.

Carrie Chastain: “I do keep a notes page in my phone of some suggestions, especially after a game of what I think we could improve on. But, during the week it’s just trying to stay as positive as possible at home with our kids and not talk about football all the time. Really engaging what’s going on with their lives and our lives outside of that."

Angela Crawford: “Not just for me, but for my kids. My three boys love coming up to HoCo. They love running around with the football players, and the football players are excited to see them and give them love every time they can. So, I wouldn’t trade that for anything."

Ebon Hicks: “Other folks, they don’t understand like the things that we have to go through with like, the fans in the stands. I didn’t know that most of his time would be spent away than being at home, but I wouldn’t want him to change his profession for the world.”

Ellie Farriba: “I feel like if I can be strong and solid, and let him know how much I appreciate him, [tell him] what a great coach he is, what a great husband he is, and be the solid rock behind him, I feel like he can accomplish anything."

Demetria Risper: “I come to practice, I come to every single game. I just want him to be successful and I want him to do well. I am willing to make those sacrifices for him, because that is how much I love him.”

You can find all of your Football Friday Night highlights and coverage on the new 13WMAZ app!