Scouts and draft analysts love the Bulldog's work ethic and football IQ. They're not sure about the arm. 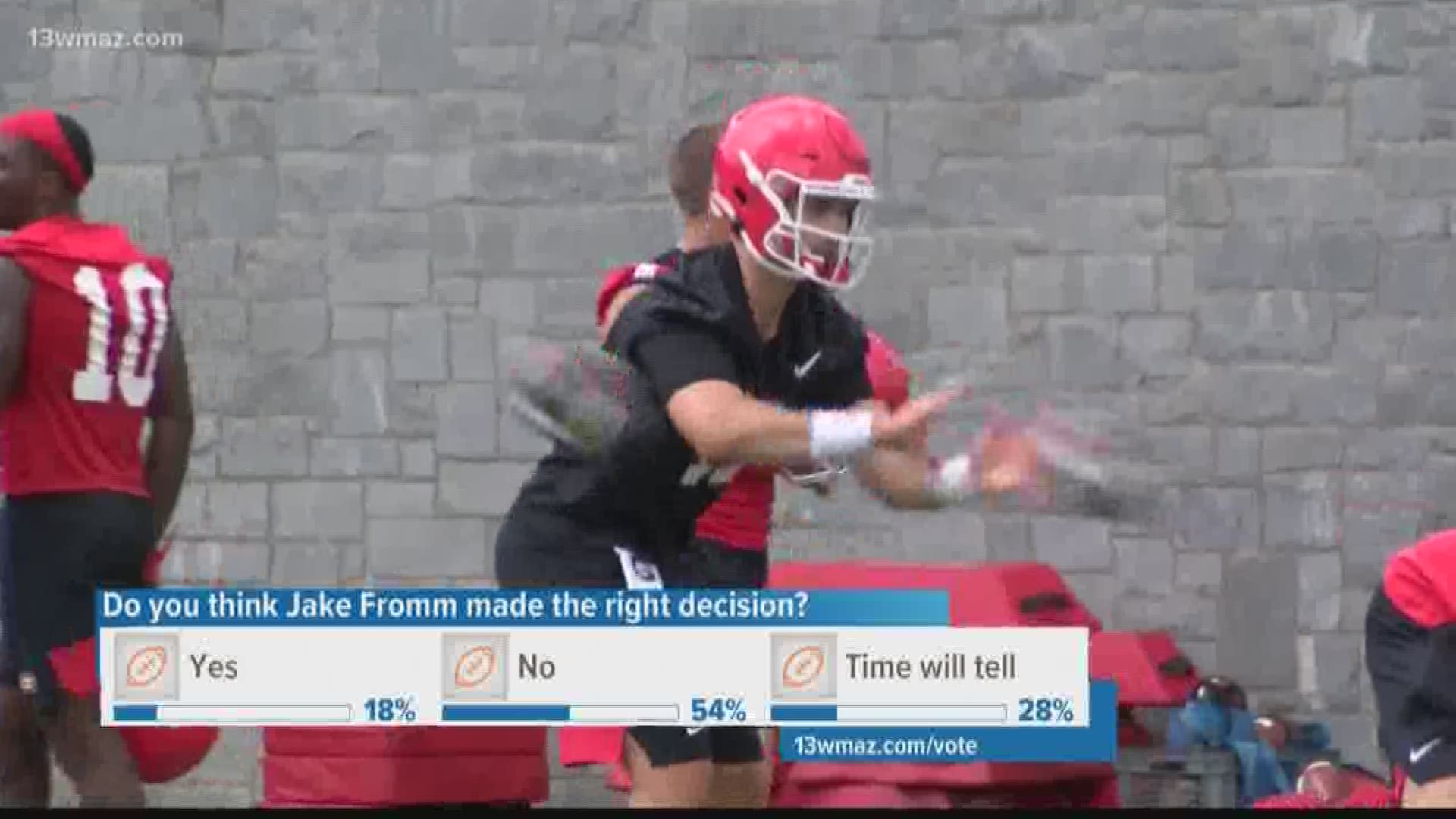 Jake Fromm is the new Tom Brady -- or the next Colt McCoy.

He's attracting some buzz for the first round of the NFL --  but he could just as easily drop out of the top 100.

He could be a natural fit to replace Brady with the New England Patriots -- unless he ends up a Steeler, a Viking, a Raider or a Buccaneer.

With the NFL draft approaching Thursday, the media, draft gurus and football insiders are debating the future of Fromm and hundreds of other players.

As usual, they don't agree on much.

The only thing for sure is that Fromm, the pride of Houston County High and the University of Georgia, will find out his football fate sometime between Thursday night and Saturday night.

One big factor affecting Fromm's prospects: He's part of a crop of talented quarterbacks in this year's draft, a group that includes Joe Burrow of LSU, Tua Tagovailoa  of Alabama, Justin Herbert of Oregon, Jordan Love of Utah State, Jalen Hurts of Oklahoma and Jacob Eason of Washington.

Most analysts put Fromm near the middle or bottom of that group.

The reason? Many scouts respect his football IQ but are skeptical about his physical talents.

Stories out of this winter's NFL draft combine described Fromm as slow and immobile, with small hands and a so-so arm.

Based purely on physical tests, the combine scored Fromm as a potential "good backup who could become a starter."

But his supporters focus on his talents above the neck. He reportedly earned one of the draft's highest scores for the Wonderlic test, the intelligence and aptitude test used to rate NFL prospects.

And some analysts say those smarts pay off on the field.

ESPN's Todd McShay says: “I would argue he’s as smart football intelligence wise as any quarterback in this class. You talk to anyone at Georgia about his work ethic and the length he goes to have success, and you can see how he was able to overcome the lack of elite physical tools.

WHEN WILL HE GET THE CALL?

Apparently, you can bet on anything connected to the NFL draft, including when each prospect's name will be called.

Sportsline.com reports that Fromm's over-under is 61.5. That would put him toward the end of the draft's second round, to a team like Tennessee (61) or Green Bay (62).

But other predictions and recent mock drafts are all over the map.

He told ESPN: "He’s as good from the neck up as anyone in this class, probably better. His eyes are as good or better than anyone in this class. He’s won a ton of games. He’s been durable. People are knocking him a little bit about arm talent and the physical stuff. But the same things were said about Drew Brees when he came out."

“Do you excuse some of the things that happened this year, in terms of touchdown numbers coming down, because he lost his top four receivers, his tight end, a 1,000-yard rusher and his center?” Kiper said in an ESPN conference call this week.

“I think those are all reasons to give Jake Fromm the benefit of the doubt and look at him in the second round.”

A Sports Illustrated draft expert put Fromm as his number 82 prospect. Others put him even lower. A USA Today mock draft shipped him to the Minnesota Vikings at number 105, and 247sports.com predicted he could be a Pittsburgh Steelers pick at number 11.

One NFC coach told 247sports.com that he loved Fromm's attitude and decision-making, but said, "The physical stuff is concerning. If he goes anywhere before the third round, that's reaching."

WHERE WILL HE GO?

Along with the uncertainty over when he'll get picked, draft predictions also have Fromm headed to every corner of America.

Besides those mock drafts naming Pittsburgh and Minnesota, several other teams may have him on their shopping lists.

FoxNews.com calls Fromm a likely late-draft pick and adds, "Three teams that experts believe he could land are the Tampa Bay Buccaneers, Las Vegas Raiders or New England Patriots. He would likely serve as a backup with the Buccaneers and Raiders but might be able to step in immediately with the Patriots."

That last possibility has a lot of Georgians and New Englanders speculating.

The Sporting News projected Fromm going to the Patriots in round 3 and commented, "His intelligence, decision-making skills and leadership qualities still make him a solid option to fill the big shoes left by Tom Brady. He should fit nicely in Bill Belichick's system and could give Jarrett Stidham competition for the Patriots' starting job.'

Various scouts and draft experts project Fromm as anything from a potential star to a likely washout.

But the consensus seems close to NFL.com's description of Fromm as a good NFL backup with the potential to eventually become an OK starter. He compared him to Colt McCoy, the longtime backup and borderline starter.

At the other end of the scale, some predictions compare him to Brady -- who was drafted in the sixth round and never famous for his athletic skill -- or to New Orleans' Drew Brees or Minnesota's Kirk Cousins.

But almost every glimpse into Fromm's future plays off the same factors: Fromm's brains and character vs. physical skills.

Some anonymous examples reported by 247sports.com:

An NFC quarterbacks coach: "I'm not sold on the arm strength, size, athleticism. I liked his decision-making, and I really like the kid. He's a football junkie. He's got the right makeup for sure."

An NFC coach: "He's smart and he's an operator and he has a lot of experience. And that counts. But that guy can't throw it. His throwing mechanics are awful. And he would take a lot of work to fix."

An AFC scout: "He's amazingly brilliant in terms of picking up the offense and everything. The upside's Kirk Cousins, if you want to say glass half-full. He's fought off two five-stars. All he does is play in big games and win games. He just doesn't have the arm talent or the physical athletic ability of these other cats."

A "high-ranking NFL scout": "Jake probably has the best makeup and character of anybody literally in the entire draft.  He's an awesome dude. His teammates love him. He works his balls off. He's as self-made as they come. He's just not very talented."