If the former Houston County Bear and Georgia Bulldog is drafted, it will be the ultimate family accomplishment 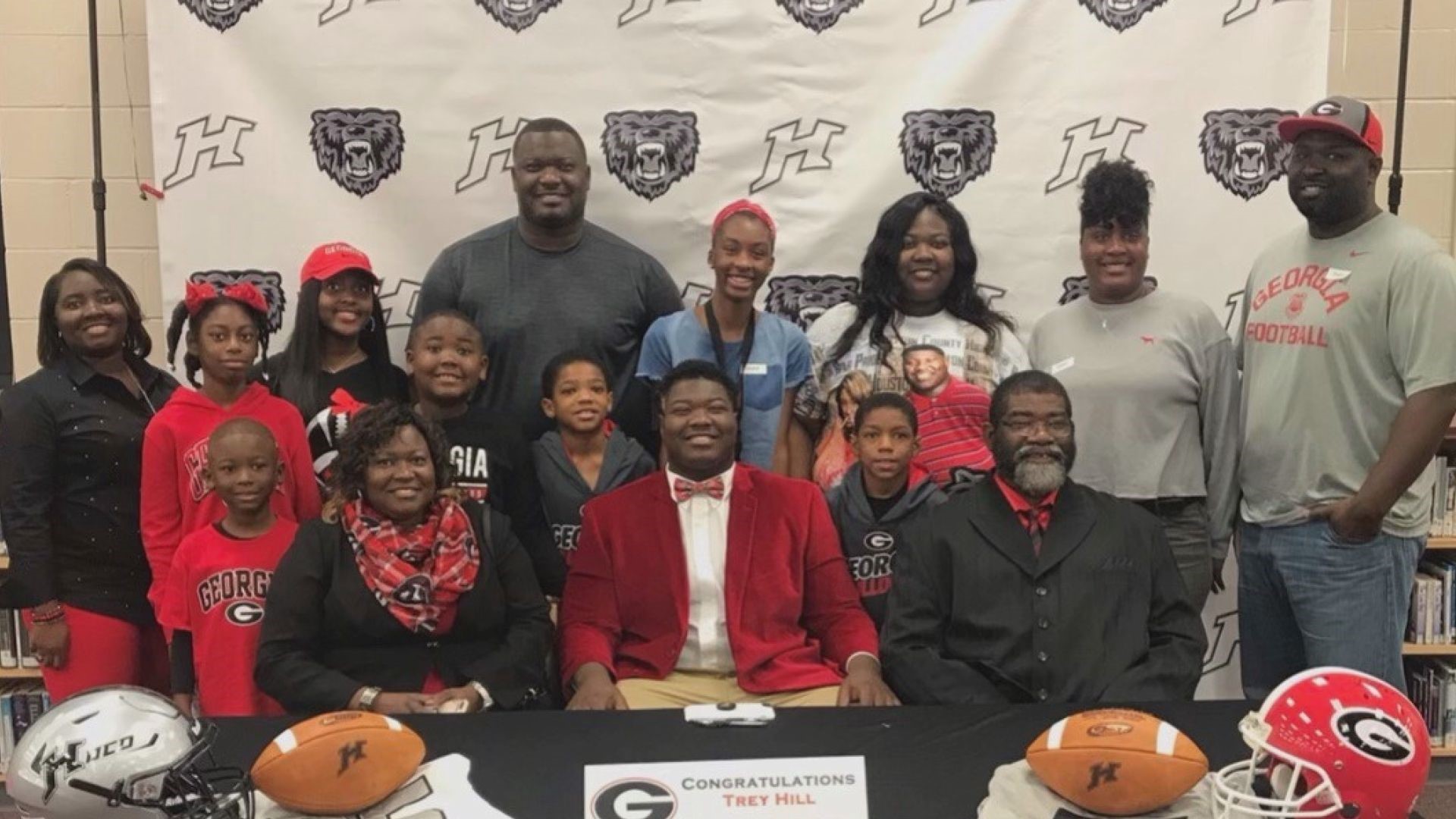 OGLETHORPE COUNTY, Ga. — The beginning of UGA center Deontrey "Trey" Hill's story is unlike most.

"Before he was born, the doctors recommended me to get rid of him. Not to have him -- that he would be a Down Syndrome baby," said his mother, Lillie Hill. "I just knew in my heart that God had special plans for him."

Born a healthy child, there were two constants for Trey: sports and his older brothers, Antwann and Derrick. Both were standout athletes at Macon County High.

Trey is one of six siblings, but he could always be found chasing after the older two.

"He's very competitive. He wanted to be like his brothers. Whatever they did, he wanted to do also," said Lillie.

"We're very close. I mean we do everything together. Walk together, talk together, anything you can name," Trey said. "We just love being around each other on a daily basis."

"I used to, you know, grab Trey. Everybody thought he was my son, but he was truly my little brother, and I used to take him into the locker room after the game," Derrick said.

The Hill family say that's where Trey's love for sports began. The Hill village raised him and Antwann took on the role of coaching him.

The little brother thrived in just about every sport. When high school hit, the Hill family decided to transfer Trey from Macon County to Houston County High. Trey moved in with his big brother, Antwann.

The shift from 2A in Macon County to 6A in Houston County created a bit of a culture shock. Trey realized his work ethic had to improve.

"It was a big change, but I just developed that mindset to lock in each and every day to get where I'm at today," he said.

Trey played three years at HoCo and the move paid off. He was named an Army All-American, a consensus four-star recruit, and he signed with Georgia's 2018 class.

"It was a great day. I signed to a school that I really loved and that I wanted to go to. D1 college. Nobody could ask for a better place to go," Trey said.

The recruiting process was overwhelming at times.

"We knew that he was doing something special that lots of people didn't have the opportunity or the chance to do," Lillie said.

As a Dawg, he was a three-year starter, was named All-SEC 2nd team as a sophomore, and graduated in three years with his sports management degree.

The boy that doctors said would have Down Syndrome is perfectly healthy and has his eyes on the 2021 NFL draft. To make it would be the ultimate family accomplishment.

"Now we look at it and here we are today talking about Trey being a NFL draft pick. If you think one person can do it, it never happens like that. There's a whole group behind the scenes getting him where he needs to be at," Derrick said.

"It's my dream and I want to bring everybody with me. That's how it is. Whatever I do, I want to contribute it to my mom, dad and my family," Trey said.

He is a projected 4th round draft pick. His family says they could see him playing for the Pittsburgh Steelers, the New England Patriots, the New York Jets or the Carolina Panthers. The NFL draft officially begins April 29.